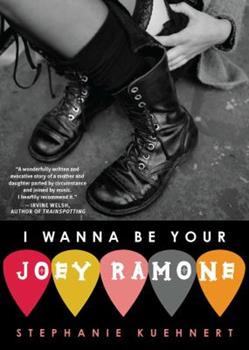 I Wanna Be Your Joey Ramone

A raw, edgy, emotional novel about growing up punk and living to tell. The Clash. Social Distortion. Dead Kennedys. Patti Smith. The Ramones. Punk rock is in Emily Black's blood. Her mother, Louisa, hit the road to follow the incendiary music scene when Emily was four months old and never came back. Now Emily's all grown up with a punk band of her own, determined to find the tune that will bring her mother home. Because if Louisa really is following...

Published by Thriftbooks.com User , 13 years ago
When Emily Black was just four months old her mother left her and her dad to follow punk rock. Now Emily is in High School and she is starting a punk rock band of her own with her best friend Regan. She sings and writes the songs with Regan, who is the drummer, and Tom the bass player. They finally get to play at River's Edge, the place where punk rock lovers hang out while watching small town bands rock the stage and also the same stage that Louisa, Emily's mom, saw Emily's dad play for the first time. Everyone loves her lyrics and sound but they don't know the real reason that is behind the word that Emily sings. She hopes that one day her mother will follow the music right back to her and her dad. This was one cool book. I Wanna Be Your Joey Ramone is probably on of the most down-to-earth books I have ever read. It isn't full of fairytales and other. Stephanie did a great job of making the book very realistic. The plot was also great, sometimes something would happen that I never suspected but then there were times when something would happen that I knew was going to happen. Which in some books I don't' like figuring out what is going to happen but I didn't mind it at all in this book. The characters in this book were stupendous; they all had their flaws, which is great because in life everyone has flaws. I also enjoyed how big of a part music plays in the story. Which is probably because I am a big fan of rock but I think every one who reads this book will be able to envision Emily rocking out on the stage, like I did. I also introduced to some great rock bands while reading the wonderful story. I recommend this book to every teen out there, especially if you like listening to rock bands. Also some adults might enjoy the story too.

Published by Thriftbooks.com User , 13 years ago
I don't even know where to begin. Nothing I could say would do this book justice. It's one of the most raw, heartbreaking, and touching novels I've read. Ever. Yikes. The thing I admire the most is that I think the author really wrote from her heart. You can tell just by the way the story is told that she cared deeply about what she was writing about which is the key to any good book; an author who is connected to her story. What's amazing is that this is Stephanie Kuehnert's first novel. How someone can write something this fantastic on her first attempt in the published world is...can I use the word amazing again? The characters are deep, detailed, and flawed. The plot is twisting and you flip the pages to find out what comes next. This book really takes you away into the trying, yet exhilirating world of rock and roll. You feel as if you're going through all of Emily's triumphs and trials with her and rooting for her as she alternately makes it big and falls hard. I think I'm running out of superlatives here. Or maybe I've uses so many that they don't have any meaning any more. But they are all deserved. So let me use a few more here; this book is really amazingly fantastic and you all need to go pick up a copy quickly. Really. :P

Published by Thriftbooks.com User , 13 years ago
Stephanie Kuehnert writes with dramatic flare and all the right beats, as she spins a story with punk rock lyrics, big dreams, and one girl not afraid to reach out to her lost mother through music, while enduring intense journeys in between. A debut like an unforgettable song, you'll want to read I WANNA BE YOUR JOEY RAMONE again and again.

Published by Thriftbooks.com User , 13 years ago
Emily Black was born for rock and roll. Her father always told her stories about how her parents lived for the music. Music was what took her mother away from her. At least that's what Emily has always been told. Emily has never needed her mother. That's what she's always told everyone else. But the music written by Emily tells a different story. Emily and her friend, Regan, have dreams of being rock goddesses. During their high school years they form a punk band. After a crazy escapade, they coerce Tom to join the band, as well. The group forms She Laughs, and the rest is history. Or it should be. But everything about Emily always goes back to her mother. And why she left. The angry, bitter songs Emily writes reflect her subconscious desire to mourn for her missing mom. Then, after a nasty break-up with her boyfriend, Johnny, Emily knows what she must do. She sets off on her own quest to find her mother, who has not wanted to be found for the past nineteen years. But Louisa Black has secrets of her own and will do anything she can to prevent anyone else from getting to close to her bad vibes. Told in a dark, woeful manner, Emily must come to terms with her real need for her mother. She's always been the strong, confident one, telling all that she never missed not knowing her mother and that all she's ever needed is her dad. But as Emily goes from adolescence to adulthood, the hidden desire to know her mother forces its way to the surface, leading Emily on a journey that reveals more about herself than she expected. And her journey may just bring her closer to her mother than she thought possible. I absolutely loved this story! Ms. Kuehnert writes a powerful story of a young woman trying to be her own person, but always having the specter of her mother's past hovering over everything she does. Music is infused throughout the entire story and plays an important part in the character development of Emily. I could relate to the musical references in the story and could almost believe that Emily was a real musician, not a character created by the author. I was sad to come to the last page, wanting the story of Emily to go on forever. (Note of advice. The story tends to be a bit graphic with sex and drugs. This is definitely written for the older teen reader.) Reviewed by: Jaglvr

This Book Rocked My World!!

Published by Thriftbooks.com User , 13 years ago
For Emily Black, music is everything. It's what made her parents fall in love way back when. It's what her mother Louisa was following when she left baby Emily. It's what Emily has to stay in control of her life. Music draws her from her dreary life in Carlisle, Wisconsin to River's Edge, an abandoned warehouse where rock bands play. River's Edge is where Emily got her fill of sex, drinking, and rock `n' roll, and where her dreams of being a punk rock goddess began. So she and her best friend Regan form a punk band named She Laughs, and Emily can't help but hope that by playing music, she'll bring her mother home. Soon, her band is swept up in the dangerous world of rock music. Her band has a lot of talent, but so many ups and downs in Emily's life lead her away from the music. There are the bad boyfriends, the death of her grandparents, the involvement with drugs and self-medication, and a year wasted searching for her mother. But eventually Emily finds her way back on track, and her friends are still waiting for her to come back and pick up her guitar. And so she does, because music is all she has. I Wanna Be Your Joey Ramone is a beautiful coming-of-age story that I will never forget. Reading along from both Emily's and Louisa's points-of-views was heartbreaking at times, because they've both experienced so much pain in their lives. The story that Stephanie Kuehnert has woven has lessons on everything from friendship, family, love, drugs, and learning to love, or at least accept, the person you are. The story is filled with so much raw emotion, and I nearly cried at the ending because I didn't want the story to be over. I have to admit that I Wanna Be Your Joey Ramone is like no other book I've ever read, and that is definitely a good thing. I've learned so much from this novel that I never would've expected from first glance. It made me want to find my inner punk rocker and scream along to deafening punk music. I promise you won't regret picking up this unforgettable novel. I definitely look forward to more amazing novels from Stephanie Kuehnert.
Copyright © 2020 Thriftbooks.com Terms of Use | Privacy Policy | Do Not Sell My Personal Information | Accessibility Statement
ThriftBooks® and the ThriftBooks® logo are registered trademarks of Thrift Books Global, LLC