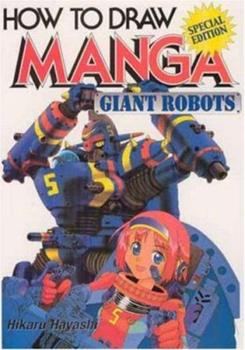 In this book, Chapter 1 is divided into the different parts of the body, starting with the head, explaining directions in designing the eye or mouth, and then proceeding down towards the trunk and the hands and feet. In Chapter 2, techniques in incorporating weapons, wings, and other extras to the robot learned in Chapter 1 to create a new design are explained. In Chapter 3, android designs are presented. This book is indispensable to those creating...

Published by Thriftbooks.com User , 13 years ago
4-1/2 stars. The more I spend time with this book, the more I like it. The big surprise for me here is the amazing attention to detail: *many* ideas & principles of robot design are analyzed & examined, with great variety in mechs. 5 stars for idea generating help(!), but 4-1/2 stars overall due to lack of transforming mech examples, which is really my main interest. I recently bought three books on robots. A brief comparison: 1. How to Draw Manga- Giant Robots. 4-1/2 stars. Phenomenal details for all kinds of robots. It's my favorite book of the 3. It has very little on robots that transform, which is too bad, but few books can match the incredibly detailed instruction here with such a wide variety of designs. It's a visually attractive, well organized effort. 2. Let's Draw Manga- Transforming Robots. 4 stars. The best book of the 3 in dealing with actual transformations. It shows actual photos of toys, and then plenty of pictures detailing the transforming process. The drawing quality is a little rough but still professional. Better drawing quality would've made this a 5-star book. 3. How to Draw Manga- Mech Drawing. 4 stars. Great looking cover; the interior art is professional as well. Some drawings are truly excellent, but many are a bit too plain looking and lack visual interest. It covers the artistic rendering of mechanical vehicles & items of all types, and not just robots. With very little information on transforming mechs, it's still above average overall. As you can see, each book has its strengths & weaknesses. And each is entirely black & white- no color drawings inside. I have yet to find a book on robots that I consider truly 5-star material. The day I do, I may update this review.

Published by Thriftbooks.com User , 16 years ago
I went to borders yesterday with a gift certificate, yearning for one of hikaru hayashi's "how to draw manga" books. So, I bought the best looking of them there, called "Giant robots". It is AWESOME!! It teaches you to convert simple human figures into robots (note: it only tells how to do that with girls) It shows the girl anatomy, showing some butts and boobies, but DON'T LET THAT HOLD YOU BACK FROMING BUYING IT!!! It's worth the money, Alot of manga books show the "PARTS" of the atnatomy, but this series isn't a "how to draw playboy" book! It's for proper form, not to be porny. my first mech looked AWSOME AND SO PRO-LIKE!! +=good -= bad/ disapointing ?= what/why the heck?! + eat your heart out, "mech mania how to draw mechs and cool space ships"! + a must buy if your a sucker for robots and mechs +weapons +special edition :) + mechs(duh) + transformers +robot parts and examples + how to turn pretty much anything into a mech with one simple step! - don't get if your little brother or sister will make fun of you for getting abook with the female anatomy in back of book forever (well, you still might wanna buy it) - doesn't tell how to draw pilots (sadly, becuase there is a good image of one on the back cover ? what the heck is with the robot with a die for a head??! Anyway, I highly suggest this book to any manga artist or fan.

Published by Thriftbooks.com User , 17 years ago
Wether you're designing your own mecha and want to make them more "realistic," or just beginning to get into the entire mecha genre; this would be a great book for inspiration. I'd recommend this book to anyone who's even partially interested in giant, walking "death-mobiles." There's lots of good ideas for the externals of mecha, and what their functions are. However, it didn't earn the fifth star only because it had no information about the cockpit or any of the various power sources that are often talked about in mecha animes or manga comics. And a section on the various parts of a cockpit would have been extremely useful. But on the plus side, it had useful information about joints, weaponry, and arm structure. It even used examples of a crane and compared the movement to a mecha. I also really liked all the different military weaponry displayed. In fact, there's a good 4 or 5 pages devoted to missile launchers, rifles, machine guns, etc... Like one of the reviewers said, though, this book is really useful when used in conjunction with "Mecha Mania," which describes differences in Japanese and American mecha. And let me tell you, there are differences. The last part, which is on female based mecha, is quite comical. There's even a "playboy bunny" type mecha, which I found quite hilarious. But in its own twisted way, the techniques can be applied to any type of mecha and even can be used for inspiration. But I guess any of the "How to Draw Manga" books has quite an array of useful techniques that could be applied to anything. Hopefully a counterpart to this book will be published to fill in the holes left by this one, but it is, after all, the basics of drawing Giant Robots.

The best so far on learning to draw mecha

Published by Thriftbooks.com User , 18 years ago
There are few books on this subject - this is an excellent primer on drawing robots of all sorts. If you are looking to draw mecha and robots of all kinds and flavors this is the one to get above all other books on this subject so far. Covers various styles of mecha from 'hero'-style super robots (gaiking, mazinger, etc), to Transformer-type robots (including faces - useful) to the more Gundam-style mecha. Only gripes is a section towards the end covering designing a robot - it uses CGI and wireframes and is difficult to visualize - this book deals with illustrating but this section explains with CGI modelling- doesn't work at all as a visual example. Better to have had 7 pages filled with more 'stuff' like more examples of articulation, weapons, heads, thrusters, etc - for inspiration. Could've also shaved a few pages off the female robot section for more mecha examples.If you want the ultimate mecha duo, combine this book with the Model Graphix Special Edition "Gundam Wars III Gundam Sentinel" book (in Japanese, but has pages and pages of mecha, weapons, tranformation sequences) and you'll be on your way in no time! Or research on the Internet - plenty of additional inspiration to complement this book.

Published by Thriftbooks.com User , 18 years ago
I know some of you may go to this page and might not be sure if you should go ahead and buy the book, saying maybe you should just get Mecha Mania instead. I say get both, like I said before in a previous review, tutorials and resources on drawing mecha are rare, so you should grab this book alongside Mecha Mania. I would have gave this book 5 stars, but they didn't show how to draw a robot step by step through a pretty good progression like in Mecha Mania. Instead they just show the finnish product and show you the shapes and methods you would use. That is a fault this book has compared to Mecha Mania. On the good side though, this book has some advantages over Mecha Mania in many ways. First it shows you more different examples of robots and has a large number and variety of accessories and styles. This book is also pretty much set up the same way Mecha mania is set up, even show how to draw cyborg women but a little more realistic. This is how the book is set up: SECT 1: BASIC ROBOT DESIGN A. FULL BODY B. HEAD C. TRUNK D. CHEST E. HIPS F. SHOULDER AND ELBOW JOINTS G. SHOULDERS H. HANDS I. ARMS: OVERALL DESIGN J. LEGS (WITH MORE SUB SECTIONS FOR EACH) SECT 2: COMBAT ROBOTS A. DESIGN BASED ON KNIGHTS ARMOR B. ROBOTS BASED ON COMBAT UNIFORM C. DESIGN HEAD D. WEAPONS E. MAGAZINE ARRANGEMENTS F. TRANSPORTATION UNITS G. COLOR EXPRESSION AND SPEACIAL EFFECTS H. DESIGNING ORIGINAL ROBOTS (MORE DETAIL FOR EACH) SECT 3: FEMALE ROBOTS (GOES THROUGH ALL OF THAT, COMPARING A REGULAR MANGA STYLE FIGURE TO A FINAL CYBORG LOOKING CHARCHTER.) All and all it is an excellant companion to Mecha Mania. You must and I mean must go get this book! Dont let the no image scare you, just look for another site where you can see the picture. In conclusion, just get this book if you are serious and want to learn how to draw mecha, it is an extra source of information where information on this subject is scarce. Peace out, untill another book or product worthy of my praise and review! G Money a.k.a Guardian "I eliminate all obstacles" - Heero Yuy
Copyright © 2020 Thriftbooks.com Terms of Use | Privacy Policy | Do Not Sell My Personal Information | Accessibility Statement
ThriftBooks® and the ThriftBooks® logo are registered trademarks of Thrift Books Global, LLC