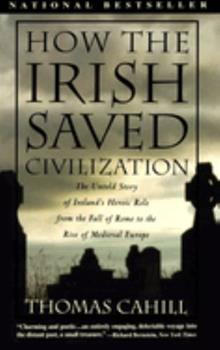 How the Irish Saved Civilization: The Untold Story of Ireland's Heroic Role from the Fall of Rome to the Rise of Medieval Europe

(Book #1 in the The Hinges of History Series)

The perfect St. Patrick's Day gift, and a book in the best tradition of popular history -- the untold story of Ireland's role in maintaining Western culture while the Dark Ages settled on Europe. Every year millions of Americans celebrate St. Patrick's Day, but they may not be aware of how great an influence St. Patrick was on the subsequent history of civilization. Not only did he bring Christianity to Ireland, he instilled a sense of literacy and...

Published by Joe Smith , 1 month ago
Listed as "Very Good", arrived in excellent condition! Very pleased with my order, will definitely buy again.

Published by Jo , 1 year ago
This book was in really bad shape, nowhere close to good. About half of it was discolored as if it had been dropped in water. Too grubby to keep or read. Very surprised to receive a book in this poor condition.

Published by Thriftbooks.com User , 19 years ago
Thomas Cahill's 'How the Irish Saved Civilization' vol. I, part of a soon-to-be 5 volume set of the Hinges of History series. So far Cahill has written 'The Gifts of the Jews,' vol. II and 'Desire of the Everlasting Hills,' vol. III. The Irish tale is how Ireland took a heroic place after the Fall of Rome to help save the ancient history and culture of early Christianity. After the rise of Charlemagne and the "dark ages" all learning and culture nearly disappeared. The heritage of about 1600 years of Western civilization of Greek and Roman to Jewish and Christian works would have been lost. If it were not for the holy mean and women of at that time a primitive Ireland. One such holy man, Saint Patrick was to preserve and transmit classic literature and evangelize Europe. His influence at the time of his slavery was the publication of Saint Augustine's 'Confessions.' At the time of Augustine's death, Patrick arrived in Ireland about 432 A.D. and revolutionized the Celtic land with the Gospel. After Patrick's death soon came the decline of the Roman Empire in the west. In c. 500 Brigid founds Kildare, into the next century Aidan founds Lindisfarne an important area where the monks set up their mission. Not only were the Irish conservers of civilization but mind-shapers placing their stamp on Western culture. Cahill does a great job in uncovering sources that point to the contribution of the Irish to save early books and documentation of ancient history. ...If you want more earlier sources try, Abe Hood's 'St. Patirck: His Writings and Muirchu's "Life",' E.A. Thompson's 'Who was Saint Patrick?,' Robert Van de Weyer's 'Celtic Fire' (Brigid of Kildare), Alwyn Rees and Brinley Rees' 'Celtic Heritage: Ancient Tradition in Ireland and Wales,' Walter Horn's 'The Forgotten Hermitage of Skellig Michael,' and Kathleen Hughes' 'The Church in Early Irish Society.' Cahill has been helpful for me especially if you're staring out with ancient history, Irish culture and Christianity and how they tie into with each other. This maybe a good place to start. There's some pretty good diagrams of maps of ancient lands (Roman Empire in early 5th century and western Europe in early 6th century) and the important centers of Irish-Christian influence from the British Isles (Britian, Picts & Irish) to what is now present day France (Gaul), Germany (Frisians, Franks & Alemens) and Italy. This offers some good starting points in early history. My thumbs up!

How Many Of Us Knew?

Published by Thriftbooks.com User , 20 years ago
How many of us even had a clue about the pivotal role the Irish played in preserving our history? This book is a delight to read, as Cahill has a way of pulling you in and keeping your interest. I have long been in love with all things Irish, but until this book I had no idea the important part they played in the history of the world. Had it not been for the Irish monks, toiling away in solitude in desolate places, most of the ancient books we have today would have been lost for all time. Cahill's "Hinges of History" series is wonderful reading [I have also read "The Gifts of the Jews" and "Desire of the Everlasting Hills"],even for those who find history to often be dry and dull. He has a way of making the past come to life in a very real way, and even more important, makes it fun. I love his sense of humor. Anyone who wants to see history in a fresh and new way should check him out, and be sure to read this book.

Need to have History Class 101 before reading this!

Published by Thriftbooks.com User , 21 years ago
To truly appreciate this book, I suggest becoming familiar with Western Civ, on a first name basis, before reading this. Mr. Cahill doesn't explain who Catullus is to the reader, he just assumes we know. Or Cuculain. Who are both awesome characters by the way. The good about this book: Excellent readability! Just wonderful, modern overview on early church and Irish history. Makes his topic interesting. Honestly, you don't get around to why the Irish saved western civ until the last quarter of the book---but, who cares!? We are having so much fun reading about stuffy old Augustine, or the marvelous character of Saint Patrick himself, to pay much attention. If you have the wee'ist bit of Irish in you, this will make ya proud to have it. It truly glorifies the Celtic race on that little isle of green. I also wanted to mention that his quotations, with Irish poetry thrown in, are delicious. Something unexplored by the modern masses, Irish poetry.... Bad thing about this book: Mr. Cahill LOVES to jump around and go on tangents. I didn't mind it in the least in this book. It makes it easy to pick up and put down if you are doing other things. It is a light read, bring it to the beach or the pool. And you will surely become enlightened and proud! Thank goodness they saved as much as they did! :)

Anything less would be uncivilized

Published by Thriftbooks.com User , 21 years ago
The title of this book is misleading, though not inaccurate. For some reason I assumed the title to be tongue-in-cheek. Some vague kind of Irish humor. I also assumed that the Irish in question were the contemporary Irish, perhaps even Irish Americans. I was pleasantly surprised to be completely wrong. I usually listen to tapes of books that I am mildly interested in and don't want to spend the time and effort to read. This one far exceeded my initial casual interest. It was a joy to listen to and worth sitting down with in print form. The book is a piece of serious history. It focuses on the transition in Europe between the fall of Rome and the early Middle Ages. The story is literally how Irish clerics saved the books and teachings of classical Western civilization, then re-introduced them to Europe after the fall. This is not only a period in history that I am not especially familiar with - I genuinely don't think there's much writing on it (at least not popular historical writing, like this book). The author makes a point that this particular story - of how, well, the Irish saved civilization, is especially downplayed or ignored in part due to who writes most of the history books (such as the English). So I learned quite a bit. Cahill is a great storyteller. I imagine that this will be enjoyable even for people without a particular attraction to history, and certainly to people with no particular interest in Irish history. Again, this is a book worth getting and reading in print form, however the audio version has one advantage - the narration by Donal Donnelly. His rich voice and well-timed delivery was a joy to listen to and kept me driving the long way home so I could hear more of the tape.

Chalk one up to the Irish

Published by Thriftbooks.com User , 22 years ago
Thomas Cahill's "How the Irish Saved Civilization..." is the kind of written history that was born in the oral tradition. This is a book not only scholarly in content, but eminently readable by all. Certainly, it has become a monument to the Irish monks who one can see painstakingly copying the ancient books of the Greeks for posterity. Cahill's recounting of Patrick, Ireland's patron saint, brings this Roman slave's life to the people without compromising his inherent holiness. Thomas Cahill does great honor to his ancestors with his book, a must read for anyone interested in the history of Western Civilization.
Trustpilot
Copyright © 2022 Thriftbooks.com Terms of Use | Privacy Policy | Do Not Sell or Share My Personal Information | Accessibility Statement
ThriftBooks® and the ThriftBooks® logo are registered trademarks of Thrift Books Global, LLC