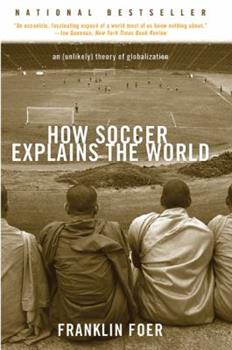 How Soccer Explains the World

Soccer is much more than a game, or even a way of life. It is a perfect window into the cross-currents of today's world, with all its joys and its sorrows. In this remarkably insightful, wide-ranging work of reportage, Franklin Foer takes us on a surprising tour through the world of soccer, shining a spotlight on the clash of civilizations, the international economy, and just about everything in between. How Soccer Explains the World is an utterly...

Published by Thriftbooks.com User , 13 years ago
This guy has such interesting insights. The writing is just random enough to keep you always interested, but still packs in real info to help understand cultures around the world and the world of football / soccer.

Published by Thriftbooks.com User , 14 years ago
A great book that displays the link between soccer and culture. Sport, and its relevence to history is reflected on every page of this book. Truly a great read for those of us who like to see "the big picture" of sport, how it is influenced by, and how it influences, society

How Soccer Explains the World

Published by Thriftbooks.com User , 14 years ago
My 16 year old son lit up when he saw this book under the tree at Christmas (pretty good for a child who would rather do anything but read)...He is reading daily and absolutely loves it!!!! He has a list of friends and coaches waiting to read it next. A great find for any soccer player or athlete....

For any soccer fan...

Published by Thriftbooks.com User , 14 years ago
As a follower of the Bundesliga, the stories and histories of the other leagues in Europe were fascinating! I especially enjoyed the Celtic/Ranger and Barca/Real stories that provided a much needed context to why these are two of the biggest rivalries in sports today. The political influence of some of these clubs is something to read...that power just doesn't occur here in the states. Overall, I thought the book was a great read for the new or casual fan, as well as the long time super-fan. A must read!

its the globalization, not the soccer

Published by Thriftbooks.com User , 17 years ago
Americans, even those who follow soccer, are going to miss the point of this book. It is primarily about globalization and not simply about soccer. Soccer simply makes the case more interesting. This book fits well with stories coming out of the European football championship this summer. These stories commented on the rabid nationalism that accompanies national teams in such a championship, while at the same time noting that those attending used the common currency and shared the freedom of travel found within the EU. Another feature of this was the fact that so many of the players competing against each other for national teams are teammates on top club sides through out Europe. This is a function of the rules of trade within the EU, as any American footballer trying to get a work permit there knows. It also will be viewed as alien by Americans who view life through the prism of the NFL. Foer's point is that the globalization of soccer football, including the conflicts as well as breakouts, is matching the globalization occuring in other ways thoroughout the world. Foer's book should be read along side material such as Robert Cooper's The Breaking of Nations, rather than the sports stories which which it is being compared. It should be read by Americans who want to understand the world beyond our own shores.
Copyright © 2022 Thriftbooks.com Terms of Use | Privacy Policy | Do Not Sell My Personal Information | Accessibility Statement
ThriftBooks® and the ThriftBooks® logo are registered trademarks of Thrift Books Global, LLC