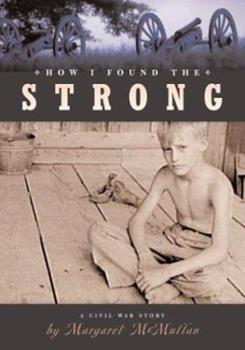 How I Found the Strong

It is the spring of 1861, and the serenity of Smith County, Mississippi, has been shattered by Abraham Lincoln's declaration of war on the South. Young and old are taking up arms and marching off to war. But not ten-year-old Frank Russell. Although he is eager to enlist in the Confederate army, he is not allowed. He is too young, too skinny, too weak. After all, he's just "Shanks," the baby of the Russell family. War has a way of taking things away...

Horrors of war but also heartening themes of perseverance and survival

Published by Thriftbooks.com User , 16 years ago
`How I Found the Strong' is a fictional account (but based on the author's family) of "Shanks" Russell's living through the Civil War in Mississippi with his father, brother, mother, sister and grandparents. Shanks' father and brother go to fight and Shanks is left with his mother, grandmother and Buck, the family slave. The themes of abandonment as well as the menace of an intimidating world seen through a child's eyes are well portrayed. MacMullan's evocation of the horrors of war and the inhumanity of slavery make this book a difficult read but the family's perseverance and survival are so memorable. The Russell family's evolution as slaveowners to slave liberators is heartening.

Published by Thriftbooks.com User , 17 years ago
One of the best kids' books I have read about the Civil War. The author bases the story on her own ancestor, whose memoirs she unexpectedly found, and she has created a totally authentic voice and a novel that is hard to put down.

Published by Thriftbooks.com User , 17 years ago
How I Found the Strong is a brilliant text best for kids about grade 5 and above. My wife picked it out for me and I wasn't sure it was going to be any good, but I soon found myself glued to the story. I zips right along with new events popping up to shock the reader and make them want to move on. McMullan is able to write in a style particularly appropriate for students who need something fast-paced and interesting. Yet I found the characters to be complex with different conflicting feelings and surprisingly authentic. Boys at this age are very much into a concept of war which is focused on winning and superiority - like the star wars genre. This book helps us all see the true character of war which is hunger, death, anger, and lawlessness.I hope McMullan will write more from different time periods we can use in schools to teach students.

Richie's Picks: HOW I FOUND THE STRONG

Published by Thriftbooks.com User , 18 years ago
"There is blood splattered everywhere. All around us the soldiers use books as pillows, the pages red with blood. There are men with bandages over missing eyes, missing legs, missing hands, and missing arms. There are men with bandages wrapped around so much of them it looks to be that it's just those loose cotton rags, turned brown from the old blood, that are holding them together. "Two soldiers tell Buck and me to step aside while they haul a man up front and lay him across a table that was meant to be a teacher's desk. A doctor with a bloody butcher's apron looks at the man's arm, which is split open down the side, and the blood drains into the pool under the table. Just behind the table is a pile of arms and legs, legs that still have on socks and shoes like they are fixing to walk on out of there by themselves. The doctor picks up a saw." A reader might quickly note that things are different these days. That is true. War still results in missing eyes, missing legs, missing hands, and missing arms, but the wounded and dying are treated with much better drugs and much cleaner bandages in much better facilities. (And if they live, Halliburton will provide them a meal for which they charge US taxpayers an arm and a leg.) "We hear shouting and carrying on and we go have ourselves a look-see."Sheriff Matkin is locking leg irons around the ankles of one of our own men." 'Deserter.' Irene spits the word out. 'See him, the one with the red hair?'"I nod. The sheriff is attaching what looks to be a fifty-pound ball to his chain." 'He was fighting a battle at Wilson's Creek, in Missouri, standing right beside his best buddy, when a cannonball came and tore off his buddy's head. But I 'spec he's seen worse. This is the third time they caught him for deserting.' " HOW I FOUND THE STRONG provides readers a graphic accounting of what it was like for the average young white Southern male to be given the chance to bleed, starve, and die in The War Between the States in the desperate hope that wealthy Southern slaveholders would be permitted to maintain their precious property right to own black people and hide their behavior behind the facade of State's Rights. And, in the manner that the nightly newscasts from Vietnam constituted part of my adolescent education and caused me to stand up and question the wisdom of our leaders' utilization of combat to "bring democracy" to Southeast Asia, HOW I FOUND THE STRONG's indelible images will certainly lead readers to similarly contemplate the barbaric ways in which we "solved" past disagreements, and the fashion in which we continue to solve our problems in the twenty-first century. "In June we run out of salt, and we can't afford to buy any more corn. Brother Davenport comes by so that we may 'dedicate' our mule Ben to the army services. Now the only farm teams we have are ourselves." HOW I FOUND THE STRONG is the story of Frank "Shanks" Russell, who is the baby of the Russell family. Living on a

Published by Thriftbooks.com User , 18 years ago
I just loved every thing about it. Having had a great grandfather who fought in the Civil War and not ever having heard any of his stories, this book could have easily been about my relatives. I was born and raised in Smith County so for me this book is extra special.. I plan to buy many more copies and also tell everyone I know about it. I love books that give you the ability to be transported to the time era and to be a part of the story and this book does it. I know this is listed as a childrens novel but it is a delight for adults also. Thank you Margaret McMullan.
Trustpilot
Copyright © 2022 Thriftbooks.com Terms of Use | Privacy Policy | Do Not Sell My Personal Information | Accessibility Statement
ThriftBooks® and the ThriftBooks® logo are registered trademarks of Thrift Books Global, LLC