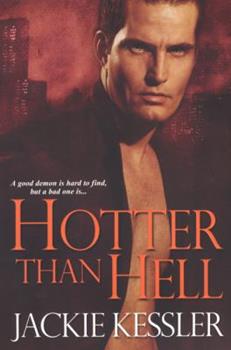 (Book #3 in the Hell on Earth Series)

So whose soul do you have to damn to get a promotion around here? Daunuan was never the ambitious type. There's so much to love about his job just the way it is--mind-blowing sexual prowess, the power to seduce any human, excellent dental plan. But now Pan, the King of Lust, has offered to make Daun his right-hand incubus. All he has to do is entice a soul destined for heaven into a damnable act of lust. Should take, oh, seven minutes, tops. Then...

Published by Thriftbooks.com User , 13 years ago
This is my favorite in the Hell on Earth series. It's not all hearts and flowers but has a nice mischievous edge to it. Daun gets the lead and he is so hot! Jezzie appears a couple times but this book was all about Daun. Daun's world gets shaken-up when the King of Lust gives him an impossible assignment. The stakes are high and failure is not an option. He has to convince someone slated for heaven to commit a sin. I loved how Jackie included some alternative-history. It gave the book a bit of depth. This book is not about guy gets the girl in the end. The ending is totally unpredictable but I loved it. I really hope we see more of Daun in the near future.

Not enough stars in heaven or hell to rate this book

Published by Thriftbooks.com User , 13 years ago
Confession time: as a former theology student, paranormal romance novels featuring sexy demons (incubi and succubae) are a major league guilty pleasure for me, and this third installment of Jackie Kessler's "Hell on Earth" series is a prime example, like a dive into a bathtub-sized hot fudge sundae or getting a massage from a barely-dressed Jude Law-lookalike. Daunaun (pronounced something like -- yep! -- don-wan), a lord of Lust, has a promotion to Prince of Lust pending, if he can succeed in seducing and claiming the soul of Virginia, a lonely woman with a pure heart. And all the while, he must dodge the demons sent to try his mettle at every step of the way. But his relationship with Virginia takes an unexpected turn and he finds himself faced with confrontations and decisions that will change him and Virginia forever and rock hell to its very core... I love the intricate details of this story, from the chilling yet fascinating horrors of hell and its denizens, to the by-contrast simple, refreshingly ordinary things of Virginia's life. And I especially love how Ms. Kessler made the heroine a full-figured thirty-something instead of the usual willowy twenty-somethings you see as the female leads in romance novels. The climax and ending are definately much darker than you'd normally find in books like this, but to end it differently, with the kind of happy ending found in many other books, would have cheapened the story and the characters. It's a bittersweet ending, but it ended the way it needed to end, with the characters where they need -- and want -- to be...

Published by Thriftbooks.com User , 13 years ago
Courtesy of CK2S Kwips and Kritiques Fans of Jackie Kessler's Hell on Earth series who love that sexy incubus Daunuan are in for a treat now that he gets his own story. Daun loves his job as an incubus. Who can resist the chance to have earth shattering sex all the time and steal a few souls for Hell while you're at it? He's happy exactly where he is and has no aspirations to rise up in the demon food chain. However, now Pan, King of Lust has decided he wants Daun at his right hand and he won't take no for an answer. The only hitch? Daun has to prove his ability by seducing a woman of purest soul, destined for Heaven, into lust, damning her forever. Sounds easy, right? Unfortunately for Daun, this assignment proves his greatest challenge. When he meets Virginia Reed, she is nothing like he expected. There could not be a more perfect person on Earth than Virginia and soon Daun finds he's none too eager to finish the job. Then there's the fact that Virginia looks an awful lot like former succubus, now human Jezebel, "Jesse" whom Daun could never resist. Things get complicated even more when every single lesser demon minion from the Underworld has shown up on Earth, bound and determined to kill Daun. Trying to save his own hide, and Virginia's, becomes a priority for Daun. Especially when... could it be possible Daun is falling in love? Of course not! After all, demons don't know the meaning of love. Or do they? I've loved the Hell on Earth series since the first book, Hell's Belles, was released and I am thrilled to see the story continuing. As much as I love Jesse's character, Daun has fascinated me since his first appearance so I was especially excited to see him playing the starring role in Hotter than Hell. I enjoyed seeing him meet his match in the beautiful, inside and out, Virginia. None of the usual rules apply and I adored the humor in seeing Daun realize the only way to attract her eye was by making himself *gasp* ordinary. As he discovers who Virginia really is, we see just how much Daun has changed from the early days, represented through a series of flashbacks to different eras. The addition of the mystery as to who is trying to destroy Daun adds to the tension. He has to protect himself and Virginia from the danger if he ever hopes to finish his job. We also get to see a little more about Virginia through the battle scenes, discovering just how brave and big hearted she really is. We also get to visit with some old and new friends. One of my favorites is Angel the former angel, now a succubus. The interaction between Daun and Angel adds another level to the story. I hope Angel will put in more appearances and maybe even get her own story someday. One thing to keep in mind about Hotter than Hell is that it's difficult to classify. While it has a strong romance between Daun and Virginia, it is very non-traditional and therefore I can't really call it a paranormal romance. This is further shown through the conclusion to their tal

Published by Thriftbooks.com User , 13 years ago
This is so far my favorite in Jackie Kessler's Hell on Earth series! She provides a fresh new perspective by telling this story from Daun's point of view. Very interesting world building and a great way to look at Demons (They're just doing thier jobs like everyone else, give'em a break already!) Can't wait for the next one!

Kessler scores again...and so does her incubus. A lot.

Published by Thriftbooks.com User , 13 years ago
Jackie Kessler continues her Hell on Earth series with this latest installment--only this time, she's switched things up. The first two books in the series were told from the point of view of runaway-succubus Jezebel. This third book is narrated by Daun, the devilishly sexy incubus we've met earlier in the series. Daun's on a mission to seduce a pure-souled woman, and things get complicated both when she proves resistant and when he realizes he's falling for her. Like in her other books, Kessler's prose is clean and spot-on--and infused with that wicked humor that makes her such a good writer. What's particularly remarkable in this book is how well she writes a first person male voice. Cross-gender writing can be a disaster sometimes, but Kessler rocks it and makes it convincing--even in the sex scenes, which are quite possibly even hotter than in previous books! If you like urban fantasy and paranormal romance, you want to read this. Liking sex and humor wouldn't hurt either.
Trustpilot
Copyright © 2022 Thriftbooks.com Terms of Use | Privacy Policy | Do Not Sell My Personal Information | Accessibility Statement
ThriftBooks® and the ThriftBooks® logo are registered trademarks of Thrift Books Global, LLC