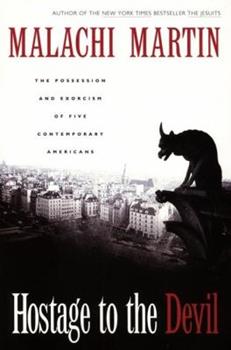 Hostage to the Devil - Reissue: The Possession and Exorcism of Five Contemporary Americans

One On One With Satan A chilling and highly convincing account of possession and exorcism in modern America, hailed by NBC Radio as "one of the most stirring books on the contemporary scene."

Published by Debi Grzymala , 1 year ago
I read this a long time ago but it’s impact is not forgotten. I recommend this for all paranormal readers, these 5 accounts are very true. If I’m not mistaken the true story of The Exorcist is included. Like I said it’s been a while since I read it.

The frightening truth about the evil all around us.

Published by NaYawkr , 1 year ago
If you are looking for a scary book to entertain you, This isn't for you. If you want a book that will truly terrify you about the evil that is the enemy of every soul trying to avoid hell, then this is the book to explain the danger you face all of your life. It is said the devil's greatest lie is that he doesn't exist. This book exposes the truth, and it will scar the person unprepared to see and understand the enemy. This is reality, one evil does not want any of us to grasp.

A Masterpiece of Religious Reporting by a Masterful Author and Priest

Published by Thriftbooks.com User , 16 years ago
A Masterpiece of Spiritual Insight by a Masterful Writer and Priest, October 27, 2005 Reviewer: Rick (Beijing, China) - See all my reviews First, a confession: I am on the verge of becoming a member of that nearly lost legion--the reborn Roman Catholic. Second, a minor revelation: this book brought me back to the Faith. Rather than scare the reader into submission to the Will of God, Father Martin stirs one's dormant and perhaps deeply buried awareness of what is altogether pure and holy and ultimately victorious in the seemingly eternal struggle between Good and Evil. In an age of jaded youth media culture, comedians and pundits who relish in their cynicism, and unabated Hollywood hedonism, it is a breath of fresh air after the rain to read and ponder on Martin's accounts of personal travail and utter spiritual anguish. This is not an "easy read;" it requires concentration and an appreciation for intricate prose style. In five lengthy and detailed case studies, written in stirring narrative style, the author carefully chronicles the slow descent of otherwise unusually clever, sensitive, and gifted people into the pit of demonic possession. Father Martin does not sensationalize, nor does he intend to appeal to the reader's emotions. Nor does he harangue or cajole or attempt to make us feel guilty. Instead, his very sure hand and deft writing leads us to realize that whether we wish to confront it or not, evil and its dark kingdom of demons thrives in this soiled earthly domain, guised and cunning but here nonetheless. Some have attempted since the untimely death of the author to dismiss him as a fraud or, worse yet, one possessed himself. He has been variously branded an adulterer and hypocrite by his detractors and depicted as something of a pariah in his own Church. Martin, however, despite any human frailities, led the truly elusive Examined Life. He intimately understood the workings of the Church and its leadership in the Vatican, and was for some time a participant in some of its most important proceedings. Moreover, the author was granted permission to leave the Jesuits by the then Pope and to pursue a more worldly path of literary exploration which led him to the conservative side of his Faith. This conversion, as it were, put him at variance with the popular surge toward greater secularism in the Church following the Second Vatican Council. And the discerning reader of those negative reviews posted here would do well to read the eulogy by Father Fiore, a longtime friend, and to consider Martin's book within the period in which it was originally published. When the mainstream media plunged into a pseudo-psychological exploration of exorcism following the box office success of the screen adaptation of Blatty's novel, "The Exorcist," Martin attempted to set the record straight--or at least very sober. The resulting work, this book, enabled the actual records (including taped recordings and extensive interviews) to come to the fore, a

Published by Thriftbooks.com User , 18 years ago
Hostage to the Devil makes the world's worst bedtime reading. When you read fiction by a horror master like Stephen King, you can turn out the lights and reassure yourself it's just a work of imagination. You will experience no such relief in reading Malachi Martin's in depth portrayal of real exorcisms. What I read in Hostage to the Devil, left me wide awake long after I set the book down.The stories are not sensationalized, but rather display an interesting combination of story-telling, reportage, and scholarship that make them impossible to dismiss. Although I am not a Catholic, I finished the book believing I'd been exposed to dangerous, but edifying truths about the nature of evil.If you are truly interested in the phenomena of possession and exorcism and are not easily disturbed, then Hostage to the Devil will be well worth your time.

Published by Thriftbooks.com User , 20 years ago
I picked this book up because Scott Peck recommended it in his book, "People of the Lie." Martin describes the stories after having extensively interviewed everyone involved, even those who have been out of the victims' lives for years. The result is a book of unusual insight, scope, and drama. It paints a frightening picture of the seduction, subtlety, and danger of evil spirits. I have no background in possession. Haven't ever even seen "The Exorcist," but this book has provided me with a new awareness of the force of evil in the world and respect and thankfulness for those who fight it. As Peck said, I am left with more questions than answers. But the book is worth being read by anyone with interest and an open mind. The basic point seems to be that evil will use anything, our minds, egos, intellect, and even our desire for connection with God to get a foothold inside us. Beware of anything that asks you to deny the God of Love and Compassion. Judgment, denial of our dependence on a benevolent God, individualism, atheism, hatred, and most disturbingly, Satanism, are all expressions of evil in the world. Beware of intellectualism that denies the soul. Most importantly, deny a sense of a spirit or voice that asks you to invite it in, "marry" it, or surrender. The power and protection in these situations seems to be Jesus. I'm not a practicing Christian, myself, but this book has made me take a hard look at my spiritual path over the last eighteen years. Finally, never take on evil or a possessed person yourself. It will destroy you. Seek out a Catholic exorcist who will use the power of God and Jesus to banish the spirit. Another reason to read this book is the beautiful prose. Martin's writing reaches a level few authors even aspire to attain. His eloquent prose touches and inspires.

Hostage To The Devil, Scary

Published by Thriftbooks.com User , 21 years ago
The credibility of the author which is well respected for his research and education makes this book all the more interesting. The book did nothing short of frighten me for weeks after reading it. It is outstanding in defining not only the how, but the why of demonic possesion. The fact that a medical doctor must be present at all exorcisms (official policy of the church) should lend some credibility to the doubt. Very interesting point brought out by the book was that there are some things which science and medicine simply can not define and perhaps may never be able to. I highly recommend this book, it is well written and very informative...also very scary. I am 44 yrs old and thought I was beyond the "scare" stage of my life, this book proved that wrong! John S.

Published by Thriftbooks.com User , 22 years ago
Father (Dr.) Malachi Martin's staggering examination of evil--HOSTAGE TO THE DEVIL--merits serious, grave, and immediate attention by the mental health establishment, religious institutions, and for that matter, any person who values spiritual growth, psychological health, salvation, or recognizes the supreme worth of a single, individual soul. Fr. Martin's work--based on the very hellacious experiences of five Exorcists and their demonically-possessed victims--affirms as truth his own encounters with the demonic, as well as those of modern-day health professionals such as the imminent Psychiatrist, Dr. M. Scott Peck (who dedicated an entire chapter to this subject in his ground-breaking, best seller THE PEOPLE OF THE LIE).HOSTAGE TO THE DEVIL paints a vicious, vivid picture of the unmitigated existential dislocation that possession wreaks, in the lives of its victims, as it intensifies in stages--manifesting an attendant array of bizarre, preternatural phenomena that leaves no one in the vicinity of the afflicted unaffected--and completes its dark process of spiritual disintegration in the nefarious nadir of "Perfect Possession." The book also delineates the ever-widening circle of despair and confusion that often encompasses those who must suffer by association with, or close proximity to the demonized, as they come to exhibit increased fluctuation of mood, change of personality, and loss of humanness, in their progressive "take over" by evil spirit. On a macro level, Martin's work sucessfully confirms, sustains, and supplements--with depth of empirical factuality and verifiable accuracy--the universal, timeless, veracity of the Bible's accounts of the Devil and his fallen angels, as personal, intelligent, evil beings bent on man's destruction. It also explores the many twisted forms and faces that their moral, religious, and aesthetic perversions of truth manifest as the lie, and are used to co-opt men into joining them in their continuous rebellion against the Creator.On a micro level, HOSTAGE TO THE DEVIL demonstrates the weaknesses and vulnerabilities within us all--as innate components of our imperfect, carnal, human nature--and how the predatory demons utilize these deficiencies to captilize on the frailties of the flesh, and gain our attention through fascination of the senses. Once they have our attention, they can attempt to fixate our thoughts on the glittering prize of a sinful pleasure. By willfully acting on these thoughts we committ sin. The more we sin, the easier it becomes and the harder it is to do good. Eventually we no longer recognize sin as the transgression it is, or are rendered too lazy or incapable of resisting its allures. The distinction between good and evil blurs until finally, we conclude that evil does not exist because we cannot see it. Actually it is we who become spiritually blind to its reality. We may then concur that we are under no obligation to resist the te
Copyright © 2020 Thriftbooks.com Terms of Use | Privacy Policy | Do Not Sell My Personal Information | Accessibility Statement
ThriftBooks® and the ThriftBooks® logo are registered trademarks of Thrift Books Global, LLC