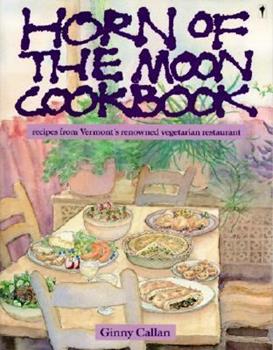 The Horn of the Moon Cafes vegetarian cookbook is one weve an been waiting for. It offers a splendid array of recipes perfected during many years of serving customers at the popular restaurant in Montpelier, Vermont. The cafe specializes in dishes that feature healthful, meatless meals with a gourmet, international flair. Ginny Callans Horn of the Moon Cookbook contains irresistible ideas for every meal of the day, from Blackberry Buttermilk Coffeecake...

Who says vegetarians can't be foodies?

Published by Thriftbooks.com User , 16 years ago
I've owned this cookbook for at least 15 years. I rarely think to recommend it to other people, because the Horn of the Moon cookbook is like a favorite sweater: comfortable, easy to get along with, and ultimately satisfying. It's not fancy, but that's the point; it's what you turn to when you want to relax. The Horn of the Moon was (and presumably still is) a vegetarian restaurant in Vermont, very much in the same genre as Moosewood in upstate New York. (In fact, if you're a fan of the Moosewood cookbooks, you can stop reading right here and click on the Buy button. There's no question that Moosewood fans will love this cookbook.) The New England background influences the choice of ingredients; as you might imagine, maple syrup is used frequently as a sweetener. (Not that I mind in the least, as it's my personal favorite, particularly with anything chocolate.) You'll also find plenty of winter vegetables, such as butternut squash and parsnips. Horn of the Moon also has an emphasis on _healthy_ eating, not just eliminating meat; sweeteners are unrefined, flour is usually a mix of whole wheat with white, and so forth. Chapters include breakfast, soups, salads, simple meals, main courses, desserts, and "celebrations, or cooking for the masses." While its chapter about ingredients was probably necessary when the book was written in '87, you probably don't need it today; most ordinary grocery stores carry tofu and whole grain flour nowadays. I've used this cookbook so often over the years that its spine is broken, and the book falls open to several pages that have a *lot* of food stains on them: maple cornmeal muffins, creamy Italian dressing, baked artichoke dip, shepherd's pie, pumpkin pie (this is my pumpkin pie recipe of choice), Greek walnut pie. As you can tell, I have many favorites, so I'll tell you about just a few. The artichoke dip is what I make on evenings when the two of us want "something" but a full meal is too much, and it uses items that I always have in my pantry. (Okay, so I make SURE I have these items in my pantry, just so I can make the dip.) Unlike most recipes for shepherd's pie, the Horn of the Moon recipe is emphatically _not boring_; I admit that it takes a couple of hours to assemble the melange of mushrooms, fried tofu (*do* take the time to fry it), brocolli, corn, cheddar, and several other veggies... but it's a guaranteed way to make a tummy happy. The Greek walnut pie could have been called, "Baklava for people who have other things to do" because it's so easy to assemble (ground walnuts, maple syrup, cinnamon, eggs piled into a filo pie crust) but it gets rave reviews when I bring it to buffets because rolling the filo on top gives it awesome presentation. As you can tell, this is a book that has a special spot on my cookbook shelf. I think it'll earn a spot of distinction on yours as well.

Published by Thriftbooks.com User , 17 years ago
This is the best vegetarian cookbook ever (if you include eggs and dairy in your diet, that is). These aren't namby-pamby low cal/low fat blah recipes, but hearty, stick-to-your-ribs, even-the-kids-will-love-it recipes. I've never made a recipe out of this book yet that was a dud. No bizarre ingredients, no complicated directions. Everything here works, and is wonderful. Highly recommended!

Published by Thriftbooks.com User , 20 years ago
I first discovered this cookbook some years back when I was part of a group doing volunteer work in rural Brazil. Most of us were vegetarians, so we took this book along with us for recipe ideas. We were very limited on available ingredients and were forced to omit or substitute about half of everything that was required. Nevertheless, we produced really great dishes from that book. As soon as I got back to the US, I ordered a copy for myself and started cooking some truly amazing meals!The Horn of the Moon Cookbook has a lot going for it. First, unlike most other vegetarian cookbooks, it does not concern itself with fat content. (A lot of the dishes are extremely high in fat.) There are plenty of resources out there for people looking to reduce fat or cut calories, and most vegetarians, even those who are highly health conscious, are willing to splurge now and then for something really good. (Just like people who eat meat.)Also, I was amazed by the number and variety of recipes. When I first got the book, I didn't know where to begin. Salads, sandwiches, soups, pastas, pizzas, desserts, breakfast foods -- it all looked so good, and the results almost never disappointed. (The only notable exception was the cashew french toast.) This book will keep you busy for weeks!In addition, the recipes will appeal to everyone, not just vegetarians. If you have a friend or relative that you want to introduce to a vegetarian lifestyle, just cook them a few meals using these recipes. Or if you are a non-vegetarian and need to plan a meal for a group of people containing some vegetarians, use this book. The vegetarians will appreciate it, and the non-vegetarians will enjoy it and probably not even notice the lack of meat.My favorite recipe is the one for Pizza Alfredo. I guarantee you've never had pizza like this before! Every time I make it, I'm always amazed when I take the first bite at how good it is. I also enjoy the Black Bean Soup a lot. I usually quintuple the recipe (I have a very large pot.) and freeze most of it to make it last, so I can have a bowl every day for a month, or longer. Also, every halloween, I buy an extra pumpkin (in addition to the one for the jack o'lantern) to make the Pumpkin Pie recipe. That's now part of my halloween tradition.If you are a vegan, you probably won't get as much out of this book as people who are willing to eat dairy products and eggs. There is a lot of dairy in this book! But there are some vegan recipes, and of course you can adjust some of the other recipes to your needs. The same goes for people who are really watching their fat intake.I can't recommend this book highly enough. Different recipes will appeal to different people, and it would be hard to imagine someone who couldn't find at least a handful of recipes in it that would delight them. This is definitely my favorite cookbook; I've never found one that even comes close!

Great recipes even for non-vegetarians

Published by Thriftbooks.com User , 24 years ago
I'm not a vegetarian, but I received this book as a gift a few years ago. It is now almost as dog-eared and food-stained as my Joy of Cooking. Every recipe I've tried is delicious, and most use ingredients that are easy to get. My non-vegetarian family loves the recipes too. Horn of the Moon is a restaurant, so the dishes have to be ones that people will actually order.

Do garbanzo beans make your mouth water? Read on!

Published by Thriftbooks.com User , 25 years ago
Having decided that I no longer wanted to eat anything with big brown eyes, I went in search of a recipe for vegetarian chili that sounded even remotely appealing. Ginny Callan's "Horn of the Moon" cookbook was a lifesaver- for me and some cows. Her chili is great (you can substitute bulgur or quinoa for soy granules if you can't find them), but so is everything else in this gem of a cookbook. The cows will thank you.
Trustpilot
Copyright © 2022 Thriftbooks.com Terms of Use | Privacy Policy | Do Not Sell My Personal Information | Cookie Preferences | Accessibility Statement
ThriftBooks® and the ThriftBooks® logo are registered trademarks of Thrift Books Global, LLC