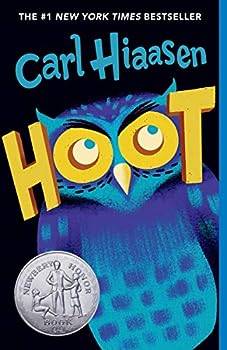 This Newbery Honor winner and #1 New York Times bestseller is a beloved modern classic. Hoot features a new kid and his new bully, alligators, some burrowing owls, a renegade eco-avenger, and several... This description may be from another edition of this product.

Published by Lone Ranger , 3 months ago
NO it was Not Like NEW as ordered, again on this shipment the completely did what they wanted an NOT send what I ordered look like Ill be going some place else.

Just as great as I remember!

Published by A.M. , 8 months ago
Carl Hiaasen has a way with words, filling the book to the brim with sarcasm and witty remarks. It's as enjoyable now as an adult as it was when I first read it as a kid!

Published by miranda.ramos , 1 year ago
Great middle-grade book to read as a family. Entertaining with memorable characters. My boys and I like it a lot.

Published by Thriftbooks.com User , 19 years ago
Finally I've found a book I think my teen-age nephew may actually read and enjoy, other than the Harry Potter series. Hiaasen is always hilarious, poking fun at those who deserve it most, and now he's put his talents to work for younger readers. I'm in my 30s and loved it and it was passed on to me by a colleague in her 50s who loved it. I figure it's a good read for anyone from eight on up. It's a fun book with a message, but it never gets preachy. Parents might also be interested to know that it shows a very loving and respectful relationship between the middle-school hero and his mother and father. Other parents in the book - - as in life - - definitely have their faults, and this kid can see how lucky he is.

Published by Thriftbooks.com User , 19 years ago
Carl Hiaasen forges into new territory: The kid book realm. Cleaned up and devoid of ... violence or much profanity, he makes a cute, quirky book that isn't limited to just kids. If anything, Mr. Hiaasen's literary gifts are more pronounced when there are no seedy elements to distract the readers.Roy Eberhardt recently moved from beautiful Montana to the swampy mishmash of Miami, and he's not thrilled about the change. He misses his old home, and the biggest, meanest bully of all, Dana Matherson, has taken a dislike to him. But on the bus, Roy catches a glimpse of a barefoot kid racing down the sidewalk. When he sees the boy a second time, he punches out Dana and pursues the kid (called Mullet Fingers, for a reason that will become evident late in the book). A mystery vandal is sabotaging the site of a future pancake restaurant, pulling up stakes, sprat-painting a cop car, and setting loose a bunch of glittery cottonmouths. Things don't improve when Roy encounters the boy's sister, Beatrice, a very tall jock with muscles and teeth of steel. Beatrice warns Roy to stay away from Mullet Fingers, but Roy is already quite involved. Mullet Fingers is on a one-boy campaign to save the tiny burrowing owls that live in the construction site -- and will be buried alive in their burrows when the construction begins. Roy begins walking the line between law and outlaw, right and wrong, trying to save Mullet Fingers and the tiny owls.Roy is the kind of kid that readers love instantly -- he's a quiet Charlie Brown who comes out of his shell for a good cause. (And he moons Dana) Mullet Fingers is a little harder to pin down, a strangely but that seems to be Hiaasen's intent. Beatrice is half-hilarious, half menacing -- the scene where she bites off part of Roy's bike tire is a scream. Dana is a pain in the backside, and readers will laugh and rejoice at his comeuppance. And Hiaasen outdoes himself with Roy's parents. He doesn't make them stupid, condescending or obtuse, but rather they trust in the big corporations a bit too much. And one of the most touching elements of this book is that Roy asks his parents for their advice, and protects his kindly mother from the knowledge of how Mullet Fingers' own mother despises him.Unlike many other adult authors who write a book for kids, Hiaasen doesn't dumb it down. He seems to have faith that his kiddie readers can handle tales of corporate double-dealing, enviromental mandayes, and paperwork that most people never have to think about. Kooky elements like a B-movie actress, an ambitious if well-meaning cop (the one whose car was painted), a baby alligator in a porta-john and a bunch of sparkling cottonmouths with taped mouths add an element of surreality to the book."Hoot" is a hoot, but it's also a charmingly serious novel. Kids will like Roy and the effective but realistic tactics he uses for the owls, and adults will like the thought-provoking storyline and quirky humor. A keeper.

A funny book with a pleasing suspense and steady pace

Published by Thriftbooks.com User , 19 years ago
Being a fan of Mr. Hiaasen's wonderfully twisted, weird fiction for adults, I was intrigued by the idea of him writing for a younger audience. Would there be a crazed, hulking idiot with a dead pit bull hanging off his arm? A roadkill-eating former governor? How would he present his somewhere-between-amused-and-disgusted attitude toward humanity in a manner palatable to kids?I'm happy to report that HOOT is funny, well written, and enjoyable, even for a depraved old lady like me. The plot concerns Roy Eberhardt, an intelligent, resourceful middle-school student who has just moved to Florida from Montana. He misses the mountains and wilderness of Montana. As a kid who has moved a lot, he's not surprised to be the victim of bully Dana Matherson. While being pummeled by Dana on the school bus, Roy spies a kid running along the sidewalk, a kid with no backpack and no shoes. Intrigued, he sets out to find him and gets involved up to his eyeballs in the strange kid's guerilla tactics to save a particular street corner from its fate as the future site of another Mother Paula's All-American Pancake. The adults seem to be ignoring the burrows of tiny owls that will be buried by the bulldozing equipment any day now. Roy's parents explain that it surely is a shame about the owls, but the company must have filed all of the papers and received all of the necessary permits. But Roy and his new friends --- Mullet Fingers, the outlaw boy, and Beatrice, his tough, soccer playing stepsister --- are not about to take the destruction of the owls' burrows lying down. Along the way they outwit Officer Delinko, the ambitious cop who tries to protect the site, and Curly, the foreman who's responsible for getting the job started.Roy's parents are thoughtful and very caring. Roy shields his tenderhearted Mom from the fact that Mullet Fingers lives in the woods and at the dump because his own mother doesn't want him. That's probably the most brutal aspect of the novel, unless perhaps it's the dishonesty of the Mother Paula's corporation in attempting to deny the existence of the endangered owls. Mr. and Mrs. Eberhardt worry about Roy and advise him, but ultimately, Roy figures out a successful plan on his own.The book carries us along with a pleasing suspense and steady pace. The author provides neat encapsulations of each character's motivations that are often missing from adult fiction. (Presumably we can work it out for ourselves.) While it might be missing the extreme characters and profanity of his adult novels, HOOT still reflects Mr. Hiaasen's usual indignation over the rape of his native Florida. Roy is an appealing character, one who may very well inspire young readers to question authority when necessary and act to protect the environment. How subversive is that? Kids of all ages should love it. --- Reviewed by Eileen Zimmerman Nicol

A Hoot For Adults Too!

Published by Thriftbooks.com User , 20 years ago
I am a big fan of Carl Hiaasen's columns and his off-the-wall novels, which focus on life in my old stomping grounds of South Florida. In interviews he has given, Mr. Hiaasen has said that he wanted to write a book that his kids could read as his adult works can be extremely crude and disturbing (although they are hilarious).With "Hoot", I think he has made a very good first effort in the kids genre. The story line of Roy, the kid who has had to move all over the country on account of his faher's job hit pretty close to home to me as I was in the same situation growing up. Hiaasen perfectly captures the frustrations of being picked on and unaccepted as a child. His encounters with Dana, the bully are great as Roy always has a way to win out.Roy becomes curious about a boy he sees running barefoot and after a while he learns about the boy, know as Mullet Fingers. This character comes off as a kid version of Hiaasen's infamous Skink from his novels Stormy Weather, Native Tongue and Sick Puppy. Mullet Fingers is a junior environmental terrorist who tries to sabotage a construction site which contains burrowing owls, which will be wiped out when the bulldozers roll. Roy learns all he can about the owls and the two, along with Mullet Fingers' stepsister, devise an interesting plan to stop the construction.This is a great book for the early teenager, but I think his adult fans might get a kick out of it. There's no weed-wacker prostetics in this one or people who juggle skulls, but a fairly straight-forward story that has a message.

Hoot is a hoot!

Published by Thriftbooks.com User , 20 years ago
As a third grade teacher I am always looking for books that not only entertain but teach a lesson. HOOT does both! My students enjoyed the story and learned about burrowing owls at the same time. They also saw the negativity of being a bully. Two lessons for the price of one. A downside for children in the eight-nine year old range was the use of a few inappropriate words. I look forward to reading this book again next year.

Hoot Mentions in Our Blog