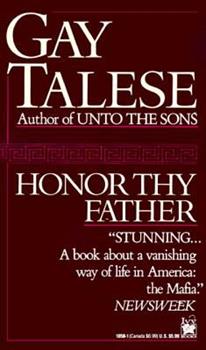 "Brilliant . . . Indispensable." Los Angeles Times Here is the story of the rise and fall of the notorious Bonanno crime family of New York as only best-selling author Gay Talese could tell it.

Published by Thriftbooks.com User , 11 years ago
I'm a Brazilian journalist and I had red all Portuguese translated books wroten by Gay Talese, but two of them, Unto the sons and Honnor thy father, I needed to read in English because it didn't have Portuguese version in Brazil. A liked booth a lot. Wonderful vision on the Italians in América and a vital historical analyse about the Máfia Bonannos family. I recomend.

Published by Thriftbooks.com User , 12 years ago
Released in 1971, this is a reprint of the classic Bonanno New York Mafia family biography with a new Afterward updating what happened to the prime extended family members. Still insightful as it was back in the 1970s, readers get an insider look at the rise and fall of the Bonannos via the interviews by NY Times reporter lease and Bill Bonanno after they met in 1965 in a courtroom. The book is broken into four overarching periods starting with the infamous disappearance of the boss Joseph Bonanno in 1964 just after dining with his lawyer and while carrying no weapons and with no bodyguards; this snatch led to the "Banana War" between his mob and three other New York area gangs. Insightful even with the account being more a historical, the audience will enjoy the side tidbits like the gangsters hiding in the boroughs (with dogs) or New Hampshire while laughing at the Untouchables. Though at times the action wanes leading to boring sections; readers should remember the goal was an honest account of Mafia life in the 1960s and 1970s. For the most part this is achieved, but the tone also feels as if Mr. Talese somewhat crosses the thin line with his subject as he appears to like Bill as a person. This remains a fascinating look at the Mafia from the inside in which silent loyalty is everything so why did Bill agree to five years of interviews and how did that impact his relationship with his dad; the son understood the Mafia mantra of HONOR THY FATHER, but how can revealing insider information live up to that tenet? Harriet Klausner

Published by Thriftbooks.com User , 14 years ago
If you expect a breezy page-turner about mob life you will be pleased in parts and disappointed in others. If you want a deeply investigative account of a mafia family, its history and personalities, this book is excellent. I'm not an enthusiast of the mob genre, so I came to this book with little else than what I've seen in the movies. It traces the rise and fall (or at least the beginning of the fall as it was published in 1971) of the traditional Sicilian mafia in America. Against this background are detailed and rich studies of the Bonanno family -- one of the original five New York City mob families. Nevertheless, it's not a Reader's Digest book. It is well researched and detailed, and the author makes frequent tangents. Gay Talese has formidable talents, so I did not mind any of these excesses. If you know what to expect from this book, it is very enjoyable.

Published by Thriftbooks.com User , 18 years ago
This author is an excellent writer. He informs, educates and enterains all at once. If you want cliches go some where else,if you want a great book stay here.

Published by Thriftbooks.com User , 22 years ago
I could not put this book down
Copyright © 2020 Thriftbooks.com Terms of Use | Privacy Policy | Do Not Sell My Personal Information | Accessibility Statement
ThriftBooks® and the ThriftBooks® logo are registered trademarks of Thrift Books Global, LLC