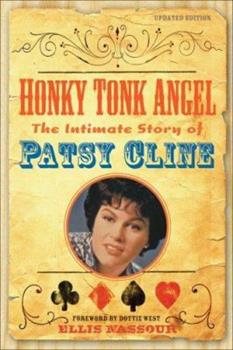 Earthy, sexy, and vivacious, the life of beloved country singer, Patsy Cline, who soared from obscurity to international fame to tragic death in just thirty short years, is explored in colorful and poignant detail. An innovator--and even a hell-raiser--Cline broke all the boys' club barriers of Nashville's music business in the 1950s and brought a new Nashville sound to the nation with her pop hits and torch ballads like "Walking After Midnight,"...

The BEST of The Cline bios; portrayal honest & loving

Published by Thriftbooks.com User , 17 years ago
Ellis Nassour began researching Cline's death long before there was a "Coal Miner's Daughter" or a "Sweet Dreams" and to date, with all of the Patsy Cline biographies out there, I can assure you after reading them all that "Honky Tonk Angel: The intimate story of Patsy Cline" is by far the best. I've owned this book since 1993 and I still pick it up at least once a year to read it. Nassour has gone to great lengths to portray Cline in a totally honest -yet respectful- way, interviewing countless friends, music legends, family members and acquaintances. He doesn't take information from other sources as other authors have since - he is THE source for all things Patsy Cline. After reading this book, you'll see Cline professionally and personally, in her highs and lows - you'll love her even more afterwards! Of all of the biographies I've read, this one is so beautifully written - it's as if you were reading Patsy's journal its so personal! If you're a Cline fan or just interested in who she was, do yourself a favor and read the best book ever written on her!

Published by Thriftbooks.com User , 18 years ago
I enjoy reading Honky Tonk Angel again & again. It's such a honest book & evokes memories of that fabulous period, the 50' & 60's when I knew Patsy & she was singing her heart out. I congratulate Mr. Nassour for writing the truth. It shows she was human like the rest of us. As a singer, no one can take her place. Her music has touched the hearts of millions everywhere. Her "Sweet Dreams" keeps us dreaming on & songs like "I Fall to Pieces" remind us we're vulnerable & have hurts in our lives as well. Her music & voice are timeless--one reason that people still listen to Patsy. The book has photos I've found no where else, & there are more (plus great stories) on the book website@ patsyclinehta.com. The book captures Patsy's life so poignantly that I sense the emotion behind each word--emotion that evokes a star who fell before her time. Faye Morgan

Published by Thriftbooks.com User , 18 years ago
I have been a Patsy Cline fan since I was six years old. This book has been in my Patsy collection for eight years. It is THE MOST comprehensive view of Patsy's life that I've ever read. (And I have "a few of those OTHER books" in my collection as well, but they don't even come close to Mr. Nassour's very informative and compelling look at the life of the one and only Patsy Cline. THE BOOK to read, ACCEPT NO SUBSTITUTES!!!... You've found the one and only book on Patsy Cline that you need, That is Ellis Nassour's: Honky Tonk Angel: The Intimate Story of Patsy Cline.

Published by Thriftbooks.com User , 18 years ago
After reading all the bio's about Patsy Cline, I find this book,by:Ellis Nassour, by far the very best. The Intimate detailis just out right awsome.Look's like a few other authors should take a few lessons! Definatly a 5 star rating!

From a drug store to the Opry, and all stops in between

Published by Thriftbooks.com User , 24 years ago
Nassour manages to show the struggle Patsy Cline went through to make it to the top, from her high school days in Winchester VA to her too early death at 30 in a crashed airplane in Tennessee. Lovers of good music who can sing every note of every Cline song, and mimic each break in that unique voice, will learn she grew up collecting Kay Starr records, worked her way around the VA-WV-MD fraternal club circuit, wasn't always popular in her home town and cut a wide path for female country singers to follow. She was a country singer when country was country. But she was also the first to use strings and when Owen Bradley added Floyd Cramer's piano to those famous recording sessions, the real Patsy Cline sound matured in the style still heard around the world today. Well documented, good photos, immensely readable
Copyright © 2020 Thriftbooks.com Terms of Use | Privacy Policy | Do Not Sell My Personal Information | Accessibility Statement
ThriftBooks® and the ThriftBooks® logo are registered trademarks of Thrift Books Global, LLC