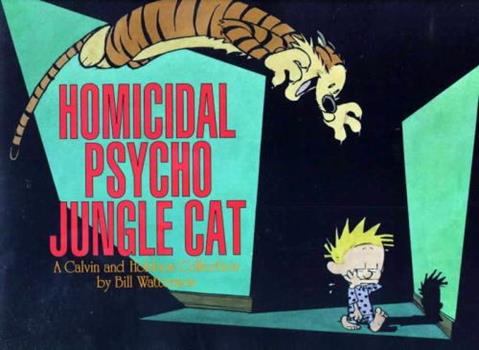 (Book #9 in the Calvin and Hobbes Series)

Calvin and Hobbes are at it again, and this time, our irrepressible friends are taking a walk on the wild side. Homicidal Psycho Jungle Cat chronicles another segment of the multifarious adventures of this wild child and his faithful, but skeptical, friend. If the best cartoons compel readers to identify themselves within the funny frames, then all who enjoy Calvin and Hobbes are creative, imaginative, and ... bad, bad, bad Calvin, the irascible little...

Published by Thriftbooks.com User , 16 years ago
This collection has a few of my favorites in it (especially the girls/bugs analogy - priceless!) Great for any age - I read C & H starting around age 7 and I still read it today! I enjoy it just as much, though I see it from a unique perspective now. Every kid should grow up with this.

Published by Thriftbooks.com User , 16 years ago
This book is called Calvin and Hobbes by Bill Watterson. This book is great. It's very entertaining and funny. This book could be read by adults and children. Some words are difficult. It's a comic strip. The characters are Calvin and Hobbes. Calvin has a very big imagination. Hobbes is his stuffed toy and he thinks it a real tiger. It has many stories and they are all funny.It's cool. I want all people to read it. It's cool, funny, and very ammusing.

Published by Thriftbooks.com User , 17 years ago
I think that this is the funniest collection yet by Bill Waterson of his world famous "Calvin and Hobbes". This is the book that I think has the funniest stupendous man comics when Calvin turns into stupendous man, takes a test, and still flunks!!! It also has some funny ones when Calvin and Hobbes ride off such giant snow mountains such as "Gizzard Gulch". I think has to be the coolest collection yet I highly recomend it.

One of the last great newspaper comics...

Published by Thriftbooks.com User , 18 years ago
Bill Watterson's Calvin and Hobbes seems to be one of the last of the great newspaper strip panel comics. It's hilarious while also being insightful, poignant, and bitingly satirical. As most readers know, since Watterson has written it elsewhere, Calvin is named after John Calvin "a sixteenth century theologian who beleived in predestination". Hobbes also has a famous historical namesake in Thomas Hobbes, the seventeeth century author of "Leviathan" whose most famous saying is that life in a state of nature would be "Nasty, brutish, and short". From such a foundation, readers can expect more than a wacky strip full of slapstick, puns and sitcom-type pet or baby humor. There is much more, because Calvin and Hobbes, like all of the great comic strips, has depth. Reading just a handful of strips reveals this.This collection from 1994 includes a great satire on conceptual art (Calvin tries to sell Hobbes a landscape in a Sunday strip); a great satire on corporate philosophy (Calvin ends up telling his mother that he needs to be subsidized); Hobbes sends Calvin anonymous insults in the mail ("Most people have secret admirers, you have a secret detractor"); "Stupendous Man" invades Calvin's class to take an exam in Calvin's place (he still flunks); one of the best is a single panel strip in which Calvin asks his parents "What assurance do I have that your parenting isn't screwing me up?"; There are also loads of Watterson's great Sunday strips. Watterson is definitely one of the last cartoonist artists that fully appreciated the boundaries (or lack of them) of the color Sunday strip. Calvin's imagined dinosaurs, aliens, parodies of "Judge Parker" type strips, and multicolor tiger battles are amazing works of cartoon art. It's difficult to find anything that even comes close on today's incredibly shrinking Sunday comics page.Bill Watterson remains heavily elusive. What has he been doing since he voluntarily quit Calvin and Hobbes? Internet searches (at least cursory ones) don't elucidate much (one mentions that he is an intensely private individual - no doubt). Hopefully he's planning another amazing strip. Whether we hear from him again or not, in the end, we can be happy that he took up cartoonist's pen and graced the newspapers with at least one more great strip.

Published by Thriftbooks.com User , 19 years ago
This collection of Calvin and Hobbes strips is just a bit more twisted than many of the other collections. The very first strip in the book sets the tone. In the middle of the night Calvin wakes up and says he's thirsty. Calvin then goes for a drink of water. Hobbes jumps off the bed and pounces on Calvin as he makes his way back to bed. He parents find him in the hall with Hobbes on top of him, mumbling "homicidal psycho jungle cat."While the opening strip is humorous, there are even better strips. Another favorite is one of Calvin's infamous "show and tell" strips. Calvin says he has nothing for show and tell, but he tells everyone that during the daytime his mom puts on a patriotic leotard, a cape and knee-high, high-heeled boots to fight crime. The teacher sends a note home with Calvin that his parent's look over together. His father's comment? "Wow, show me that outfit sometime."The breadth of strips is consistent with other Calvin and Hobbes books, but for some reason these strips gave me more laughs than many of my other Calvin and Hobbes Books. However, the funniest strips often seem to be the cruelest. For example, Suzy follows a series of signs regarding an "important message," ending in a sign that says, "Important message: Look Out!" We then see Calvin sitting on a branch dropping a snowball, saying, "It's like shooting fish in a barrel."I enjoy Calvin and Hobbes a lot. Of all the illustrated books I have, Calvin and Hobbes are among the funniest, and the most consistent. This particular collection is particularly funny, though a bit more bizarre than many of the other collections. However, it is the twisted nature of some of the strips that make them so interesting and funny. If you are a Calvin and Hobbes fan or just looking for a smile, here is an excellent book.
Trustpilot
Copyright © 2022 Thriftbooks.com Terms of Use | Privacy Policy | Do Not Sell My Personal Information | Cookie Preferences | Accessibility Statement
ThriftBooks® and the ThriftBooks® logo are registered trademarks of Thrift Books Global, LLC