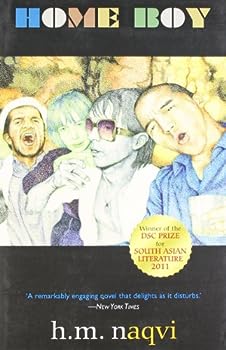 Beautifully written, sharply observed, and very funny, "Home Boy" is a heartbreaking story of a young immigrant's romance with America. This description may be from another edition of this product.

Published by Thriftbooks.com User , 12 years ago
This book was so good! I first heard the author read at Asia Society and knew this was a book that I would not be able to put down. If you want to get a little taste of this novel go to [...] and click videos and watch Naqvi read. You won't be disappointed. As a native New Yorker I read this book and was simply smiling and cooing at every page. My friends who are not New Yorkers, as we all live in DC, loved the book too. Its a fun read and an adventure tale about three boys who get taken into FBI custody just as the sun comes up on the end of a night on the town. The plot as described here doesn't sound that thrilling. Right? But seriously, its all in the writing. You've got to go to asiasociety.org and listen to the man read. You'll be sold on the book hand down right there!

Published by Thriftbooks.com User , 12 years ago
H. M. Naqvi's Home Boy takes the reader to post-9/11 Manhattan through the eyes of Chuck and his two "chums," AC and Jimbo. The three are suddenly wrenched from their bon vivant cosmopolitan lives when they're picked up by the FBI and thrown into a detention center for questioning. Naqvi's narrative and dialogue are brilliantly rendered, capturing the ethos and ethnicity of the New York experience in tones that for me bring Faulkner to mind rather than Rushdie. Race, religion and tough guy interrogation tactics reveal a coming of age, not only for Chuck and his chums, but everyone in a time when precarious human rights can be dispensed with on the basis of suspicion alone. By contrast, Naqvi also explores the lifetime bonds of family and friendship. It's a tale of tragedy and laughter, both captured in unforgettable scenes. For instance, the classes and test Chuck has to take before getting his NY cab driver's license after being laid off in the banking business. H. M. Naqvi is an extraordinary raconteur. His gifts of insight match his gift of gab.

Graham Greene Is Alive and Well and Writing from Newyorkistan

Published by Thriftbooks.com User , 12 years ago
This horribly smart, funny novel is all heart -- with a sliver of ice. You won't know what's been done to you -- or, for you -- until you finish reading, but you'll be riveted all the way. The howling dislocation of being a Pakistani in New York just after 9/11 could not possibly be better rendered, nor could the sea change of that era, the grit that settled forever and made us grow up. This is a work of art that helps to define our times, to answer the nagging question: who are we, really? To do all that, it shouldn't be so much fun to read. But it is. It is.

Published by Thriftbooks.com User , 12 years ago
I simply loved this book! It's both entertaining ad touching! A lovely journey through the triumphs and losses of young man finding his way in New York. "Homeboy" ends with the bittersweet strength one finds at the remains of a day marking the end of youth. A novel with heart, "Homeboy" is a must read!

An Exercise in Cosmopolitanism

Published by Thriftbooks.com User , 12 years ago
This is simply the best novel I have read in years (and I read a lot of novels). Funnier than Toole's A Confederacy of Dunces, more substantive than Shteyngart's Absurdistan, Naqvi achieves a masterly comic prose: witty, intelligent, sensitive, poignant, hilarious, all at the same time. Naqvi is the shrewdest observer of cosmopolitan urban life that I know, with a unique eye for just the right telling detail. Even as seasoned and celebrated a novelist as Salman Rushdie tried and failed to capture the New York City zeitgeist of the new millenium in his novel Fury, but Naqvi succeeds, and succeeds brilliantly where Rushdie couldn't. This novel shows how people from all over the world (whether from Pakistan or Senegal or Korea) easily become "New Yorkers" in no time. The plot is compelling and the language is exquisite. Buy it. Read it. And then you'll end up buying many copies for friends, just as I did. Young Husain Murtaza Naqvi is the, ah, new South Asian writer to watch.
Trustpilot
Copyright © 2022 Thriftbooks.com Terms of Use | Privacy Policy | Do Not Sell My Personal Information | Accessibility Statement
ThriftBooks® and the ThriftBooks® logo are registered trademarks of Thrift Books Global, LLC