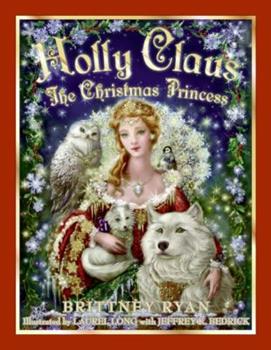 Based on Brittney Ryans novel The Legend of Holly Claus, this breathtakingly beautiful picture book features dazzling illustrations by Lauren Long and Jeffrey K. Bedrick. With fanciful characters and evocative imagery, this epic story pays homage to the great fairy tales in a richly imagined tale of the life of the daughter of Santa Claus.

Published by Thriftbooks.com User , 14 years ago
This is a very nice Christmas story for your little ones that is beautifully illustrated. My kids really enjoy listening to it, and it is a pleasure to the eye as well.

A beautiful addition to your Christmas collection

Published by Thriftbooks.com User , 15 years ago
I own the novel version of The Legend of Holly Claus, and I fell in love with it. I have now been re-reading it every December, to re-experience the magic and to get into that Christmas feeling. Brittney Ryan's narrative is compelling and heart-warming, and it is simple enough for most children to read, though many adults will adore this story as well. I have yet to purchase this book, but I feel it is simply the condensed version of the novel, along with gorgeous accompanying illustrations. I greatly admire Laurel's artwork, in its detail, delicacy, and the ability to let the viewer sit for long periods of time just taking in the nuances within the art. They have gone further with this novel, adding full, vibrant colour to each work of art (since the original illustrations in the novel are black and white), which further enhances the reading experience for children and grown-ups alike. Lovely story, lovely art.. and brimming with Christmas spirit. What more can be said? I highly recommend this for every parent, book fanatic, and Christmas lover alike!

A magical way to spend the holidays with the ones you love!

Published by Thriftbooks.com User , 15 years ago
For centuries upon centuries Santa Claus has traveled the world every Christmas Eve upon a sleigh pulled by reindeers, a sack of toys perched by his side. Over the course of these years, Santa Claus has never asked for anything in return, and, amongst all of the letters he receives each and every day, no one has ever asked him if he, himself possessed a Christmas wish. Until one year - in December of 1878, to be exact - when Santa Claus opens a letter from a young boy named Christopher W.C. Christopher is kind enough to put his own wants aside, and asks Santa Claus what he desires for Christmas. And so, Santa Claus's wish is granted - he receives the child he has always longed for. Holly Claus - the Christmas Princess - is brought into the Land of Forever, along with shouts of joy, and celebration. Unfortunately, the splendor of her arrival quickly turns to sadness when the festivities are cut short thanks to the arrival of the evil Herrikhan, an individual who was banished from the Land of the Immortals many years ago for wrongdoing. Herrikhan leaves a curse upon Holly Claus, one that encases her heart in ice, forcing her to stay in a frosty climate for all eternity, or her beautiful heart will melt. But there is an ultimatum. If Holly Claus manages to find the strength to marry Herrikhan, she may live forever - just like her parents. Santa Claus is horrified by the curse, and quickly locks the gates to the Land of Forever, vowing never to open them again. This, in turn, causes Christmas to be put on hold. Suddenly, children of all ages are not experiencing the wonder of Christmas, all because of Herrikhan and Holly. So, when Holly becomes of age, she escapes from the Land of Forever along with her animal friends - Tundra the wolf; Euphemia the owl; Empy the penguin; and Lexy the fox. Holly Claus is determined to change the ways of the Land of Forever, and bring Christmas back to the masses. But when she arrives in New York City, she realizes that her quest may be harder than she originally thought - especially with Herrikhan on the loose to demolish her plans. Years ago I fell in love with Brittney Ryan's THE LEGEND OF HOLLY CLAUS. The exuberant story, accompanied by an irresistible, compassionate heroine, and Laurel Long's breathtaking illustrations took me to another world, and kept me on the edge of my seat as I experienced the Land of the Immortals and 1800 New York City alongside Holly. Now, with the release of HOLLY CLAUS: THE CHRISTMAS PRINCESS those memories have been brought back to me quite vividly. HOLLY CLAUS: THE CHRISTMAS PRINCESS is basically an abbreviated, picture book-esque version of Ryan's 500+ page THE LEGEND OF HOLLY CLAUS. While the story is shortened quite a bit, it still holds every bit of the magic that THE LEGEND OF HOLLY CLAUS dispersed. And, with the illustrations of Laurel Long, along with Jeffrey K. Bedrick, readers of all ages will find it hard not to fall in love with Holly Claus; and, will, most likely, fin
Trustpilot
Copyright © 2022 Thriftbooks.com Terms of Use | Privacy Policy | Do Not Sell or Share My Personal Information | Accessibility Statement
ThriftBooks® and the ThriftBooks® logo are registered trademarks of Thrift Books Global, LLC