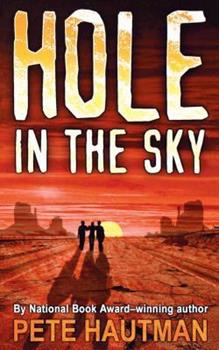 In 2028 a deadly Flu virus ravages the Earth. Only one in two thousand survive the virus, and these "Survivors" are rarely left unaffected. By 2038, only thirty-eight million people remain on Earth. Most of them live in small communities, ever fearful of outsiders who might bring the deadly Flu. Ceej Kane lives with his uncle and his Survivor sister, Harryette, in an abandoned hotel on the rim of the Grand Canyon. His quiet, boring life suddenly becomes...

Published by Thriftbooks.com User , 17 years ago
The novel Hole in the Sky, written by Pete Hautman, takes place in 2028 in Arizona. A raging flu virus has wiped out almost all of Earth's population. A boy named Ceej, his sister Harryette, and his uncle live in an abandoned hotel next to the Grand Canyon until one day when a tribe of flu survivors attack a nearby settlement. Someone must go work the dam, otherwise it will break and the canyon will flood. Ceej and his friend Tim are left alone at the hotel. They wait for days but no one returns for them.Ceej and Tim must now rescue Harryette, but on the way they meet a Hopi girl named Isabella who tells them of a sacred place called the Sipapuni where they can escape their flu-infected world. The Sipapuni is a hole in the ground in one world and a hole in the sky in another. Bella is strange and mysterious but intent on reaching her second world. It is hard to believe in such a thing, but it seems as if Ceej is falling for it even if Tim is not. Bella decides to aid them on their search, putting aside her desire to raech the Sipapuni as soon as possible.The four teenagers are all forced to choose a path. Will Harryette return to Ceej and Tim? Will Tim believe in the Sipapuni or will he choose to stay in the world he knows and trusts? Will Ceej follow Bella in to the Sipapuni, if it even exists? And ultimatly, will they survived this roving, dangerous, trek?This book was very intruiging and there wasn't ever a dull moment. It has an interesting plot and the way the flu was spread is very believable. The characters seem so real and the lonely world Pete Hautman has created seems so futuristic. This book gave me the chills because 2028 isn't that far away and it is possible for this kind of thing to happen. Overall this book was excellent and I would suggest it to anyone who was looking for something with a strange but exciting twist.

Published by Thriftbooks.com User , 19 years ago
we read this book in school aswell, but in 8th gade. it was a very interesting book. And seeing as how i live in AZ, it made me want to go read it at the grand cayon (the setting of the story). It's got some interesting people, and ideas. A killer flu has spred and most everyone dies, but there are surviours, they loose something though (like they'r hearing or the abliaty to speek). we had the aouther viset us in class as well, and to hear what he had to say about the book and answer our quetions was great!! ^^ (thanx mrs. wingert!) READ the book!! trust me u'll like it ! ^^

Published by Thriftbooks.com User , 19 years ago
This book was one of my favorites, it gives you something to think about and also lets you use your imagination, if you like this book I recomend Z for Zachariah and Sang Spell.

Published by Thriftbooks.com User , 20 years ago
This is really a great book. I'd already read a book about the Spanish Influenza in 1918 (A Time of Angels by Karen Hesse) and was intruiged by Hautman's idea that it could happen all over again. I got the book from the library first, and lent it to my younger sister who didn't sleep until she'd finished reading it. I read it a few days later and found it hard to put down. This is why I decided to purchase it.
Copyright © 2020 Thriftbooks.com Terms of Use | Privacy Policy | Do Not Sell My Personal Information | Accessibility Statement
ThriftBooks® and the ThriftBooks® logo are registered trademarks of Thrift Books Global, LLC