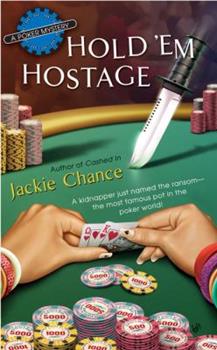 Poker is a game of chance-and mystery. Texas Hold 'Em champ Belinda "Bee Cool" Cooley is back in Vegas for the World Series of Poker. But a sinister stranger has kidnapped Bee's goddaughter and threatened to kill her if Bee doesn't win the tournament and hand over the pot.

Published by Thriftbooks.com User , 12 years ago
This is a great addition to her other books on Texas Hold 'Em. I feel she gives enough info on the game without being too technical about it. I know generally about poker so I wasn't unfamiliar with the game but I was glad she discribed what the actual terms were. I saw the humor in the but and I found it a very quick read. On a side note I'm one to glance at the ending before I'm half way through a book--not a good idea with this one. I had the wrong idea about the hero of the book for most of the time I read it, although it didn't quite have the ending I thought it would-the expected is sometimes boring--I feel it ended it with an opening for yet another Bea Cool story.

Back to Vegas for Bee Cool

Published by Thriftbooks.com User , 13 years ago
This series is fun. I like the Vegas setting, the excitement of the tournaments, with the mystery and comedy thrown in. Bee has a lot of fun sidekicks, that add to the charm of this series. I can't remember if it was this one or "Cashed In" that I was surprised to see Council Bluffs mentioned (I grew up there), so that was a fun side note for me. I gave the book 5 stars, Mr. Brown's one star review is unfair for this type of book, so I wanted to offset his one star as much as I could. Otherwise I would have given it four stars for the tiny gripe that if I put down the book for a day and went to pick it back up I had trouble remembering what was going on. There are a lot of characters all off doing things and it's hard to keep track. But big deal. This is otherwise well-written, and entertaining. I can't comment too much on Mr. Brown's dissection of the poker hands, I don't play, but if there are few mistakes here and there, it's no biggie to me. I liked the end alot, but I can't say why because that will give it away. But, it leaves things open to more adventures, so I hope Ms. Chance pays no attention to Mr. Brown, and I hope she's got another Bee Cool mystery in the works.
Trustpilot
Copyright © 2022 Thriftbooks.com Terms of Use | Privacy Policy | Do Not Sell My Personal Information | Accessibility Statement
ThriftBooks® and the ThriftBooks® logo are registered trademarks of Thrift Books Global, LLC