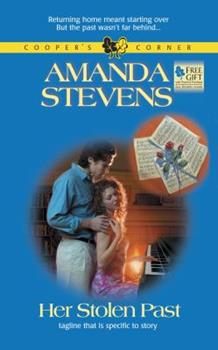 Her Stolen Past (Cooper's Corner)

(Book #11 in the Cooper's Corner Series)

Suffering from amnesia, Beth Young has no memory of who she really is, but she senses she's hiding out from danger. When she plays the piano at the Twin Oaks B & B, co-owner Clint Cooper can't help but notice her. Although she's drawn to him, Beth can't risk Clint's life. Original.

Danger and Romance in Cooper's Corner

Published by Thriftbooks.com User , 18 years ago
HER STOLEN PAST by Amanda StevensHER STOLEN PAST by Amanda Stevens is part of the COOPER'S CORNER line of books published by Harlequin books. This was my first taste of the series, and so far I am impressed.In this novel, we are introduced to the town of Cooper's Corner and Clint Cooper, the co-owner of the bed and breakfast called Twin Oaks. He and his young son Keegan moved to this little town from the big city of New York after Clint's wife and Keegan's mother Kristin had passed away. They would have stayed in New York, except for the fact that Clint noticed Keegan was starting to get involved with gangs. Clint's sister Maureen convinced them to move from New York to the small town of Cooper's Corner, and now she and Clint co-owned the bed and breakfast.Beth Young is the local librarian in town, as well as the pianist on certain nights at the Inn. Clint has always felt an attraction for her and Keegan figures this out. The young pre-teen decides to play matchmaker, and somehow sets up a scam to get his father to meet Beth for dinner, and soon the two of them are embarking on something that almost looks like the start of a relationship.In the mean time, unbeknownst to the rest of the town, Beth was in a horrific car accident two years ago and was an amnesia victim. She never regained the memories of who she used to be. Beth doesn't even remember her own name. The name "Beth Young" was given to her by a cancer patient named Addie who shared Beth's room at the hospital during her recovery period. To honor her friend, Beth moved to Cooper's Corner and took over the name of Addie's deceased granddaughter Beth. Beth's memories go no further than that. The only part of her that she knows is from her past is her ability to play the piano, playing music that she had written in her past. There is a mystery behind Beth's past, a mystery that is tied to the music she plays on the piano. She believes that someone is out there looking for her, wanting her dead, and that her car accident was no accident. She fears that it really was a murder attempt. Because of this belief, Beth is afraid to get close to Clint and Keegan, afraid to endanger their lives. But it's too late. Clint has fallen in love with Beth, and soon they both find that they are involved in something that may endanger their lives.I recommend HER STOLEN PAST. It was well written, highly enjoyable, and I found the plot interesting. It was one of those books that I couldn't put down. I am looking forward to reading the rest of the COOPER'S CORNER series.
Trustpilot
Copyright © 2022 Thriftbooks.com Terms of Use | Privacy Policy | Do Not Sell My Personal Information | Accessibility Statement
ThriftBooks® and the ThriftBooks® logo are registered trademarks of Thrift Books Global, LLC