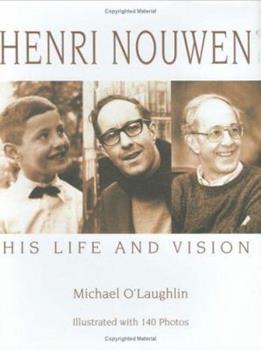 Henri Nouwen: His Life And Vision

This description may be from another edition of this product. At the time of his death in 1996 Henri Nouwen was already one of the most popular spiritual writers in the world. Through more than fifty books he touched countless people with his compelling...

Published by Thriftbooks.com User , 12 years ago
Michael O'Laughlin was Henri Nouwen's teaching assistant at Harvard Divinity School and previously edited Nouwen's JESUS: A GOSPEL and wrote GOD'S BELOVED: A SPIRITUAL BIOGRAPHY OF HENRI NOUWEN. In 2005, he published HENRI NOUWEN: HIS LIFE AND VISION, and an updated paperback version of this book (reviewed elsewhere in this space by me four years ago) has just appeared under the Orbis Books imprint. The book is readable, balanced and wide-ranging in scope. It captures the essence of a widely popular 20th Century Catholic priest of whom his Cardinal Archbishop stated: "The world was his parish." The book's lay-out and design are outstanding and the photographs that accompany virtually every page are unique and highly illustrative of the life and vision of one of the most significant spiritual writers of the past forty years. As one who has written and lectured widely on Henri Nouwen, I am amazed at how much consistently high quality material has been compressed into such a relatively small text. It is on a par with the similar biographies designed by Orbis editor Robert Ellsberg and his staff and written by James H. Forest that treat Dorothy Day and Thomas Merton. Having read this book four years ago, I can readily attest that it continues to instruct and inspire and bring to life the spirit of the remarkably attractive person who considered himself to be "God's beloved," and who enjoins upon his readers the injunction to "trust the Catcher." At the suggested retail price of $16.00, this oversized trade paperback is a fine literary investment, recommended for spiritual reading or as a gift to the Nouwen aficianado or novice alike. Gerald S. Twomey, Ph.D. (editor, REMEMBERING HENRI: THE LIFE AND LEGACY OF HENRI J. M. NOUWEN).

The Many Faces of Henri

Published by Thriftbooks.com User , 13 years ago
This wonderful book by Michael O'Laughlin, which is a follow-up to his insightful God's Beloved: A Spiritual Biography of Henri Nouwen (2004) [the publication date for Henri Nouwen: His Life and Vision, contrary to the information on this page, is actually 2005, not 2000], reminds me of an icon. It has no "new" information about Henri. Folks who have read his books will learn nothing "new" from the text. (Folks unfamiliar with his works, on the other hand, will find this a marvelous introduction.) What makes this book so special are the dozens of photographic portraits of Henri that so wonderfully capture his moods, his stages of life, his joy, his suffering, his self-doubts, his enthusiasm, his weariness. As the book progresses, Henri looks increasingly worn-out. The final photograph of him, on page 169, is actually rather alarming. He looks gaunt, and his eyes have an exhausted look to them. But there's also something incredibly centered and spiritually healthy in that final photograph, suggesting that the end of the journey really has arrived, and that the suffering and the wholeness can't be separated. Anyone who loves Nouwen will love this book, and will spend many hours gazing at the photos that O'Laughlin has so carefully selected.

Published by Thriftbooks.com User , 14 years ago
A very readable biography about a very complicated man of God. His love of Jesus and his fellow man -- mirrored by the self-hatred of his homosexuality -- made for a heart-breaking story. Available, accepting and loving to so many people, Nouwen could never accept himself as God made him.

Nouwen in Story, Quotes, and Photos

Published by Thriftbooks.com User , 16 years ago
This work, written by Henri Nouwen's teaching assistant at Harvard, presents "the ups and downs and main events" that made up the life of the Dutch priest, who, in the author's words "was an example of how to be a real Christian." The opening sections on the 1930s Catholic Church in Holland and Nouwen's post-ordination interest in studying psychology provide important insights into his development as a priest, writer, and teacher. Nouwen was highly energetic and continued during his 12 years of university teaching (10 at the Yale Divinity School) to discern God's plan for him. He investigated monasticism and worked among the poor of Latin America, all the while writing books and publicly promoting peace and justice. At age 54 he took up residence at L'Arche Daybreak, a community of disabled individuals in Toronto. Nouwen served and ministered there until his death 10 years later. O'Laughlin's brief biography demonstrates the connection between Nouwen's many and varied activities and his spiritual journey. The story is enriched by the book's format: pages with wide margins to accommodate quotations from Nouwen's works and 140 candid photos that speak volumes. This volume will be a valued addition to any library, even one that already contains a shelf full of books by and about Henri Nouwen.

Published by Thriftbooks.com User , 16 years ago
The famous Dutch priest and spiritual writer, Henri J. M. Nouwen, will be dead ten years next September. Nouwen, himself, reflected that his genius resided in the fact that he "always tried to use as my prime resource some of my own observations and personal struggles with whatever I am writing about". Henri Nouwen was a prolific writer of more than sixty books. He was also a captivating preacher, public speaker and teacher who appealed to both Catholics and Protestants alike, from Evangelical social activists to traditional Trappist monks. In this book, Henri's former student and graduate assistant at Harvard Divinity School and previous biographer, Michael W. O'Laughlin, rates Nouwen "as one of the great twentieth century communicators of the gospel... as a speaker and teacher he showed himself to be a true master and he had that rare commodity-- a true message." O'Laughlin paints an endearing but unvarnished portrait of Henri as a "wounded healer": "Henri was a troubled man, someone whose sensitivity could become a two-edged sword. Certainly, it opened up new vistas to him, but on the other hand, it sometimes drove him to anxious despair... Henri's own fluidity of feelings and intensity meant that he often found himself on a roller coaster ride from equilibrium to joy to turmoil." O'Laughlin sensitively and painstakingly recounts the major moments, movements and relationships of Henri's well-documented life. The text is beautifully written, laid out and designed, and complemented by 140 photographs, many of which have never previously been published, including many rare shots from Nouwen family albums. It features representative selections of Nouwens writings laid out and displayed in sidebars that perfectly augment O'Laughlin's narrative. In voicing his own doubts and distress, Henri seemed to speak for many. By crafting this excellent biography, Michael O'Laughlin succeeds in bringing Nouwen back to life again for generations of readers, both the uninitiated and longtime devotees and aficionados. I shared a friendship with Nouwen for over three decades and I can report that I was delighted by this moving tribute to one of the great priests of the post-Vatican II era and one of the most prolific and beloved spiritual writers of our time. I plan to give this book to many on my Christmas gift list. Highly recommended. Reverend Gerald S. Twomey, Ph.D. Port Washington, NY, USA [Gerry Twomey edited THOMAS MERTON: PROPHET IN THE BELLY OF A PARADOX (Paulist Press) and wrote WHEN CATHOLICS MARRY AGAIN (Harper & Row) and THE 'PREFERENTIAL OPTION FOR THE POOR' IN CATHOLIC SOCIAL TEACHING (Edward Mellen Press). He is currently editing HENRI NOUWEN: CREATIVE MINISTER (Orbis Books), which will appear in July, 2006].
Copyright © 2020 Thriftbooks.com Terms of Use | Privacy Policy | Do Not Sell My Personal Information | Accessibility Statement
ThriftBooks® and the ThriftBooks® logo are registered trademarks of Thrift Books Global, LLC