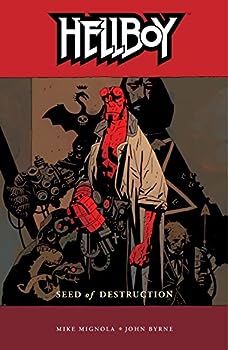 This description may be from another edition of this product. Suitable for comics fans, collectors, and those just discovering Hellboy through the motion-picture, Hellboy II: The Golden Army, this book and figure set includes a Mike Mignola-inspired Hellboy...

Published by Thriftbooks.com User , 17 years ago
Between Marvel devoting their time to Spider-Man clones and X-Men re-hashes, and DC deciding which super hero to kill off next, I had toned out of comics for a while. But the minute I took my first glance at Hellboy, I knew that this was something special. Created by Mike Mignola (set designer for Francis Ford Coppola's adaptation of Bram Stoker's Dracula), Seed of Destruction begins in Germany in 1944 where a young demon is raised from hell. The demon, dubbed Hellboy, grows up fighting the paranormal with a small group of allies, and is a hero in every sense of the word. The irony of Hellboy? He's more human than just about every other character you can find in a comic book in the past ten years, and this graphic novel is pure brilliance from beginning to end. Mignola's artwork is awesome to say the least, and his story (scripted by comic legend John Byrne) nicely begins the mythology of what would become a beloved comic. This is a must own for any and every comic fan, and the books that followed only got better and better.

Hell on earth with a snappy attitude

Published by Thriftbooks.com User , 17 years ago
In 1944, a team of specialized German Nazis gathered together with a powerful sorcerer on a strange mission to raise seven demons, while at the same time a group of rangers led by Sgt. George Whitman gather in an old church in East Bromwich, England with a team of paranormals, determined to discover what it is the Nazis are up to.The Sorcerer, wearing some odd apparatus on his arms, powered by an electrical generator, casts a spell from a rocky hilltop resembling Stonehenge. A bolt of lightening-type power issues from the rod he holds in his hand, and strikes the church where the rangers are gathered along with their special forces. When the smoke and debris clear, a small being is hunched down on the floors, looking as though he were part demon and part little boy. It is Trevor Bruttenholm who names him: Hellboy.Skipping many years into the future, Hellboy comes to visit Trevor, now an old man. Trevor, who had been like a father to Hellboy all these years, tells Hellboy of the failed "Cavendish Expedition" he has just recently returned from, way up in the Artic Mountains. He and the Cavendish "Boys" had found some ruins high up in the frozen cliffs, older than old, and inside beneath a mammoth carved pillar is a statue of a sitting man so perfect it seemed to be alive.But Trevor has no further memory of what happened, though the Cavendish brothers did not return with him. During Trevor's narration of the expedition, Hellboy notices that Trevor's house is infested with frogs. When Hellboy mentions the frogs, Trevor freaks out and backs away from the frogs, out onto his balcony, from where he is suddenly and unceremoniously tossed back into the room at Hellboy's feet; quite dead. His body seems to be covered in odd marks that were not there mere seconds ago.Hellboy brings in his friends to help him investigate the death of Trevor; Elizabeth Sherman and Dr. Abraham Sapien. Liz has highly advanced pyrotechnic abilities, and Abe...well, Abe is a really cool fish-man. Beginning their investigation at the old Cavendish mansion, which is slowing sinking back into the lake it was built over, the three friends are quickly separated and all hell breaks loose; pun intended. The nameless Sorcerer who originally summoned Hellboy is back to claim what he believes is his, but by now we know that Hellboy can't be forced to do anything he doesn't want to do.This first Hellboy book reveals Hellboy's origin, and shows us the loyalty between him and his friends, and the lengths they will go to for each other. This was actually a very difficult review for me to write because I liked it so much, it is hard to describe in a non-gushing way just how much I enjoyed this book. The storyline is very intense and fast-paced, even for a graphic novel; the illustrations are superb, the cells formed and drawn just right, so that the eye follows the flow of Mignola's inspired tale of this devilishly good guy without staggering or stopping to search for the correct

Published by Thriftbooks.com User , 17 years ago
It's a mistake to divorce writing and art from each other in comics. A good comic needs to be a total package. Comics with great art but bad writing are failures, and vice versa. Hellboy is a great example of what makes good comics good. In Hellboy, Mignola amalgamated horror, faeire tales, fantasy, and mythology in comics in a way that hadn't been done before, and brought back some stuff that hadn't been seen in the mainstream in a long time (Most especially a strong and unabashed H.P. Lovecraft influence), and did it with his own refined visual style (heavy Jack Kirby influence). Top it off with Mignola's sense of humor which irreverently loves all those elements, and you've got a standup start to a standout series.

Its more than Seeds of Destruction!

Published by Thriftbooks.com User , 19 years ago
Seeds of Destruction is a nice place to begin because it deals with where Hellboy hails from, no pun intended, plus its actually one of Mignola's more heavily Lovecraftian tales. The coloration is also darker in graphic novel form, giving it more of more horror appeal than the pervious comic releases did. There are more than enough Nazis, plots leading into the next Graphic Novel (Wake the Devil) to want you to go on without stranding you in a half-read story, not to mention the fact that its so wonderfully dark. Something that all other reviews seem to be leaving out, something that affected my purchase of this particular graphic novel for a while, is the fact that it isn't simply the Seeds of Destruction story. Included within it are also two other stories, earlier works of Mignola, that are oftentimes overlooked and are quite the pain to find in their original formats. 1) This is a story from San Diego Comic-Con Comics #2, a little tale involving squibs of storyline and drying up towns in the desert, not to mention Anubis.2) There's another story from Comic's Buyer's Guide dealing with Herman Von Klempt, everyone's favorite Nazi "Nazi head in a bottle" and his Brutus, his super gorilla. Also included is a little section entitled "Where did Hellboy come from?," a section delving into the early promotional art showing Hellboy off, plus some nice pictures by artists including Art Adams and Gary Gianni. Tentacled things = Happiness!

Published by Thriftbooks.com User , 22 years ago
HELLBOY is probably everything Robert Bloch (from the intro to Seed of Destruction) and Alan Moore (from the intro to Wake the Devil) say it is but the bottom line is that it's just great fun; a great visual and mythical experience. It clears itself of any pretentiousness right of the bat: it's about a monster (more specifically, a demon) who goes around and beats up or gets beaten up by other monsters. Mike Mignola himself said he "wanted to draw monsters" and HELLBOY assures that he'll be able to do so, whether drawing the good guy or the bad guys. But while Hellboy may not be the most cerebral comic book on the rack (not to imply that there are that many to begin with), it draws it's inspiration from mythology and folklore, so it's definitely food for the brain. And it may just inspire you to go and read the source material. Something must also said for the artistic effort in the SoD series. Not to say that subsequent HELLBOY stories drawn by Mignola look bad (far from it), but in Seed Of Destruction, one can clearly see the labor of love involved. The combination of line work and heavy blacks seem to convey a stronger sense of depth than usual. Speaking of heavy blacks, Mignola has admitted that such a technique began as a way to cover up what he "didn't know how to draw", but he certainly knows how to turn this admitted weakness into strength. Mignola also skimps on backgrounds, often just leaving them out for panels at a time, but when he does render backgrounds, he knows just how to set the mood, whether the background in question is a derelict church, a moonlit forest or a graveyard. So effective are Mignola's backgrounds when they are seen, that the reader barely misses them when they're absent. Anyway, enough gushing praise. I end with a recommendation: anyone who's a fan of comics, folklore or mythology should give HELLBOY: SEED OF DESTRUCTION (or anything HELLBOY, for that matter) a look.
Copyright © 2020 Thriftbooks.com Terms of Use | Privacy Policy | Do Not Sell My Personal Information | Accessibility Statement
ThriftBooks® and the ThriftBooks® logo are registered trademarks of Thrift Books Global, LLC