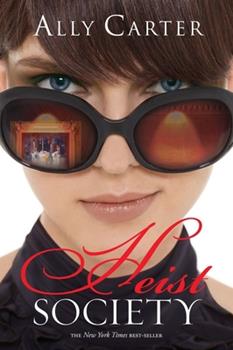 (Book #1 in the Heist Society Series)

Kat Bishop can steal anything-including your heart. Intrigue, adventure, romance, and charm abound in this New York Times bestselling series. For as long as she can remember, Katarina has been a part of the family business-thieving. When Kat tries to leave the life for a normal life, her old friend Hale conspires to bring her back into the fold. Why? A mobster's art collection has been stolen, and Kat's father is the only suspect. Caught between Interpol...

Heist society really is a beauty

Published by DocSparkles:p , 3 years ago
The book really goes through ideas that work out, leaving little things un finished. Kat and Hale are very expressive characters that hold very complete back stories. I feel that the book could really be read and loved by most who enjoy the mystery heist type of stories, and the book can hold its own along side the oceans 8 trilogy

Published by Thriftbooks.com User , 12 years ago
Heist Society was an intriguing, original, action packed read that had me at the edge of my seat. Kat was an amazing main character, she was witty, smart, kind, and most of all- a thief. I loved Carter's Gallagher Girls books and was very excited to dive into Heist Society. It was as good, if not better, than the Gallagher Girl books. Mysteries/suspense novels are few and far between in YA literature of late, and Heist Society was a refreshing and fun read that you can finish in a couple of days. All the characters were excellent and well developed, I could picture them all and her fellow team of thieves were one of my favorite cast of characters in a YA book. Gabrielle, Angus, Hamish, Simon, and Hale were original, unique, and fun. They each had terrific personalities and added a lot to the book. Everyone had a place in this novel. Hale was amazing, I loved him, and he's perfect for Kat! The "bad guys" were easy to dislike and they got what they deserved, which made me happy. The whole plot was building up to the last few chapters, which definitely had me on the edge of my seat. Of course, throughout the novel I was excitedly reading, there was never a slow moment, and I'm hoping for another adventure involving Kat and the gang soon! The plot was fantastic- one of the most original and well-orchestrated I've read in a long time. Carter's writing style is great and she has a way of really connecting the reader to what's happening. Even though this novel was in third person I could understand Kat and what she was dealing with. This is a novel for everyone and is appropriate for any age. 5 stars! In addition, there were a lot of twists in the plot that kept you guessing. Who was Visily Romani? What happened to the paintings? Everything was a mystery and the ending tied everything together perfectly. There are times when you want to laugh out loud and others when you're biting your nails with anxiety, but overall this was a fun read that has reinstated my love for books about spies (why are there so few in YA lit?) as well as for Ally Carter and her terrific writing. You'll fall in love with the characters, as I did, and the plot will easily engage you. I would definitely recommend this book to anyone and the cover's gorgeous as well, so it's a win-win! Heist Society is out now, this is one definitely worth buying in hardcover! Rating; Plot: 10/10 Characters: 10/10 Ending: 10/10 Enjoyment: 10/10 Cover: 10/10 -- Overall: 50/50= 100%

Published by Thriftbooks.com User , 12 years ago
When I first heard that Ally Carter was coming out with a new series I was both excited and wary. Excited because I really enjoyed her Gallagher Girls books and wary because I wasn't sure if a new series would live up. Well, I shouldn't have worried because not only did Heist Society live up to the goodness of Gallagher Girls it surpassed it. I really enjoyed this book. To get an idea of what its like think about if the characters in Ocean's 11 or on the tv show Leverage had children who grew up in their world....these are the teens that you find in Heist Society they live on the edge of the law and stealing and pulling cons is as easy for them as breathing air is for us. I loved the cast of characters in this book. They were all just so much fun! And where Cammie Morgan can sometimes get annoying and repetitive Kat does not. She is smart and feisty and she tries to leave the life she's always known to be a normal teen. But normal isn't what its cracked up to be and its hard to turn your back when your family needs your help. So she's pulled back into the life of cons and we are taken along for the ride across the US and Europe. Heist Society was a well told story, it was fast paced and filled with enough witty lines that had me laughing aloud as I read the book. I couldn't put this one down and I hated for it to end. There wasn't anything that I can say that I disliked in this book it just seemed to have it all. Adventure, strong characters, strong plot, romance, etc etc etc. I can't wait for Carter to come out with a sequel for this book. If you decide to only read one series of Ally Carter, then choose this one....its worth the trip. As originally posted on my blog Ticket to Anywhere

Published by Thriftbooks.com User , 12 years ago
Kat used to lead a life of danger before she pulled her biggest con ever and walked away from a life of thievery to attend boarding school. Her enrollment lasts a few months before her old life comes crashing in on her and her plans. She's framed for a prank she didn't commit, but that will nonetheless result in her expulsion from school. Quickly she realizes this dismissal is the work of an old family friend. He's here to tell her that her master thief father needs her help. Turns out her father's been set up, too. Only the consequences are nowhere near as soft as being kicked out of boarding school. Kat secretly meets her father's deadly enemy and works out a deal. She has two weeks to find the paintings and steal them back. If successful, it will be the biggest job she'll ever pull off - and also the most dangerous. Can she do it? I adore THE GALLAGHER GIRLS series, but this new series may be even better. HEIST SOCIETY is my new favorite book. The combination of finding the art, the major heist, saving a relative, and going against the family makes for a thrilling, edge-of-your-seat read. Reviewed by: Jennifer Rummel

Published by Thriftbooks.com User , 12 years ago
I always love Ally's books, and this was no exception. Heist Society has it all-suspense, adventure, travel, a smidgen of romance, a boarding school, a crazy family with a history that matches, and an all teenage crew of thieves. Katarina Bishop is a smart girl who just wants out of the family biz and be normal, but doesn't realize all she's left behind. Kat and her delicious billionaire friend, Hale, round up a merry band of thieves that are their best friends to help get Kat's father out of a tight spot. If they don't return what a seriously evil guy thinks her father stole, there will be some serious consequences. Kat and the team scramble to perform one of the most difficult and risky heists anyone in her family have ever attempted, before time runs out. If that doesn't reel you in I don't know what will. This was a seriously good and fast- paced book, pretty much impossible to put down. Take my advice, and read it ;)

Ocean's Eleven with a Teen Twist

Published by Thriftbooks.com User , 12 years ago
Katarina Bishop was born to the life. When she was three, her parents took her to the Louvre - to case the joint. Kat's family members have been thieves and con artists for generations. Kat herself has participated in some of the most daring heists in recent history, but none were as audacious as the con she pulled on her own, one that got her out of the life and into one of the most prestigious boarding schools on the East Coast. Kat's stay at the Colgan School lasts just a few short months before Hale, an old partner in crime, runs a scam to get her expelled and back into the family business. Kat would be furious with Hale but it turns out he had an excellent reason for ruining her con. Someone has stolen five paintings from a very powerful, very scary Italian mobster. The list of people who could have pulled the job contains exactly one name - Kat's dad. The only problem is, he didn't do it. Her dad is currently under surveillance by Interpol (a result of the job he was actually pulling on the night the paintings were stolen), so that leaves Kat to discover who pulled the art heist and get the mobster's paintings back before he starts hurting the people she loves. Kat's got two weeks, a crew of teenagers and (hopefully) all of the skills she needs to plan and pull off the biggest heist in family history - and given her family history, that's saying something.
Trustpilot
Copyright © 2022 Thriftbooks.com Terms of Use | Privacy Policy | Do Not Sell or Share My Personal Information | Accessibility Statement
ThriftBooks® and the ThriftBooks® logo are registered trademarks of Thrift Books Global, LLC