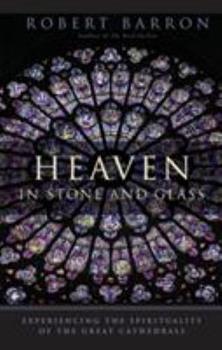 Heaven in Stone and Glass: Experiencing the Spirituality of the Great Cathedrals

Like a mystical tome awaiting to be deciphered, a Gothic cathedral holds many secrets about the soul's yearning for God. In Heaven in Stone and Glass , Catholic priest and professor of theology at Mundelein Seminary in Chicago teaches us how to read these secrets, with beautiful reflections on aspects such as light and darkness, the labyrinth, the meaning of gargoyles and demons, and the imagery of vertical space. whether you are preparing for a pilgrimage...

good insight into a historical treasure of the church

Published by Thriftbooks.com User , 15 years ago
This book is the door that opened me to the appreciation of Medieval arts from the eye of one who counts the past as a great heritage. People these days often think of the Medieval days with a certain sense of despise. We forget that we see a bigger world than the Medieval people did because we are standing on their shoulders. While we may know more about this world, we have much to learn from their understanding regarding the world yet to come, because spiritual truths are timeless. Spiritual truths aren't about how many angels standing on a pinhead. This book brings the spirituality of this ancient heritage vividly to life. Being a protestant myself, I certainly benefited greatly from it, because church history did not begin from the Reformation.

The portal between heaven and earth

Published by Thriftbooks.com User , 16 years ago
Fr. Barron's book was used in the course on the church and the arts at my seminary; the course strives to connect various aspects of art, architecture, music, etc. into the spiritual life of the church - this book fulfills that purpose admirably. It is an extended meditation upon humanity's link with God, using the idea and image of the Gothic cathedral as the central icon or focus upon which this meditation is based. His analysis is erudite and wide-ranging, drawing upon his own experiences and reflections, as well as references past and present in the greater corpus of Christian and intellectual traditions. For example, in the chapter on Virtues and Vices, Barron flows easily from Aquinas to Flannery O'Connor (both of whom are frequently reference throughout the text); in other places, he incorporates Bertrand Russell and Pythagoras on mathematics, Tillich's idea of the ground of being, Rahner's idea about the incomprehensibility of God, the theologies of Augustine and Teilhard, Dorothy Day and the Desert Fathers. The ideas incorporated here include those of this world and of other worlds, drawn together into harmony and unity, while still retaining aspects of particularity. Barron looks at particular aspects of the cathedral, drawing both on the physical and emotional responses one might get being in a cathedral. There are architectural and artistic features of cathedrals designed to deliberately evoke certain responses, symbolic of the status and relationship of human beings to God and the heavens. This includes the darkness upon entering, the verticality and light of the high windows, and even the very shape of the cathedral itself. `The building itself is a cross,' Barron writes; `as we walk through it, admiring its variegated faces and aspects, we are, unavoidably, walking through a cross.' Barron explores the design features such as tall walls, flying buttresses, and cruciformity, as well as the artistic features such as rose windows, labyrinths, gargoyles, and the exterior facades. Elaborate in detail and polyvalent in interpretative possibility, the Gothic cathedral includes elements for people of differing educational levels and backgrounds, seeking to be a place where all of humanity could come together as one before God. `There are indeed no greater shrines to a spirituality of the earth than the Gothic cathedrals produced by the medieval mind.' These churches were intended both as portals to heaven as well as a foretaste of heaven. This is a short book - indeed, I was able to read it in one sitting. Part of this was due to the engrossing nature of Barron's writing; it is easy to get swept away into the spiritual heights and depths of his descriptions and narrative flow. Each brief essay can stand alone (just as one might focus upon a particular aspect, such as praying the labyrinth in a cathedral), but like the cathedral, it is the combination of all the aspects taken together that makes it truly remarkable - there

Published by Thriftbooks.com User , 19 years ago
Fr. Barron's book is truly a small gem. Very compact and readable yet extremely spiritual and philosophical, it gets right at the heart of the very essence of the great cathedrals. Simply looking at their form, though very beautiful in itself, is not enough without completely immersing oneself in the mentality and spirit of the people who built them. This rich mentality is in sharp contrast to the agnostic hedonism that resulted from the Enlightenment. As an architecture student, it gives me great hope that, as he points out in the book, we are in an age when people are becoming increasingly interested in spirituality and symbolism and long for a reality deeper than the profane and the mundane. Given the spiritually and architecturally impoverished and overall pathetic nature of most Catholic churches built in the past three decades, this meditation is like a candle in the dark, not only harkening back to a time when everyone knew that God was the center of the universe, but inspiring hope that that time will one day return. In short, this is an excellent book that I recommend to everyone.

Published by Thriftbooks.com User , 20 years ago
Robert Barron's enlightening little book explores the rich symbolic world of medieval cathedrals. Written as a series of fifteen meditations, "Heaven in Stone and Glass" approaches the cathedral as an intentional evocation of both Christian belief and the Christian journey. Barron's observations are rich in metaphor and allusion. His images are strongly drawn: the nave as womb, cruciformity as a way of the cross for all entrants, verticality as an invitation to transcendence, the rose as music of the spheres. He is also a voluminous reader, citing sources as diverse as the Desert Fathers, Dante, Flannery O'Connor, and Alisdair MacIntyre.One criticism though. Despite his deep knowledge of cathedrals and their meaning, Barron misstated a few architectural details. Mostly notable was his contention that the flying buttress (not the pointed arch) was the architectural breakthrough that made brilliant illumination possible. But don't let this lapse deter you from enjoying this excellent book.

Published by Thriftbooks.com User , 21 years ago
I am a seminarian where Fr. Barron teaches and have had some of his courses. He is an excellent instructor, pastor, and priest, but more importantly he is one of the best communicators around. He can convey with passion and brevity in two minutes what it would take others twenty; he is exciting and inspiring, chracteristic of a good witness to the faith. I feel blessed to have him as a part of my formation. He tackles theological issues with a fresh and unique perspective. Heaven in Stone and Glass is no exception. Not many books may ever have been written about the distinct (and sorely overlooked) spiritual dimensions that Gothic cathedrals convey. Joseph Campbell, in The Power of Myth, once said that while in France, Chartres Cathedral is his sacrament; it puts him in touch with the Divine like nothing else. That is the point of Gothic; to make you awestruck, humble and kneeling before the Almighty. Travel to any cathedral in Europe or Washington National Cathedral in D.C. and you immediately understand; it is the numinous, the religious feeling, the experiential wonder of which Schleiermacher wrote; it is the Mysterium Tremendum of which Otto wrote. It is to make you feel like a child before God; small and lost in praise walking in the lofty, incense-filled rarified interiors of these cathedrals. It is to put us in our place before the grandeur of God like no other. It could be argued that this is what true religious experience is, of which Gothic cathedrals afford us. Perhaps that is what, in part, Jesus meant when He said we had to become child-like unto the Lord. That is the point of Gothic. This is what Bob Barron was on to. This could come in very handy as we continue to deal with the loss of the sacred in general in the modern world as well as the inexplicably bad taste in music, art, liturgy, and architecture that is prevalent in too many of our churches, that has the propensity of turning many inquirers to the faith off. Get this book, share it with others, and keep it in your prayer and the treasure of your heart.
Copyright © 2020 Thriftbooks.com Terms of Use | Privacy Policy | Do Not Sell My Personal Information | Accessibility Statement
ThriftBooks® and the ThriftBooks® logo are registered trademarks of Thrift Books Global, LLC