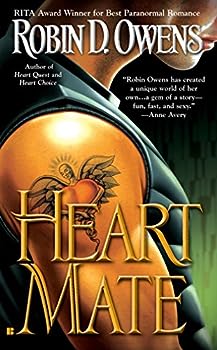 (Book #1 in the Celta's Heartmates Series)

This description may be from another edition of this product. All his life, Rand T'Ash has looked forward to meeting his HeartMate, with whom he could begin a family. Once a street tough, now a respected nobleman and artisan, he has crafted the perfect...

Published by Thriftbooks.com User , 18 years ago
It is amazing to think this is a first book from Owens. Her storyteller's ability is strong, her use of humour done with flair, her adapting ancient Celt lore into a whole new world is done with strong imagination. It is obvious there will be more "Heart" tale from the world of Celta, where there are gifted people who are blessed with Fams (familiars). Anyone who loves kitties will enough this tale that is so original.I cannot wait for Heart Thief! One of the best books I have ever read, so I hope there will be many more visits to Celta!

Published by Thriftbooks.com User , 19 years ago
Rand T'Tash looked all his life for his HeartMate, his own true love with whom he could start a family. In preparation, he created something spectacular and priceless from deep within his soul -- HeartGift. The HeartGift is something that a mate gives to his one true love as a gift, something that only the one true love can see. Danith was a common, plain nobody, hidden in the world of nothingness. She couldn't see the true love before her -- the person who could heal her aching heart and complete her inside and out. Rand and Danith find each other with the help of a familiar with a taste for luxuries and a magical cat called Princess. When Rand tries to give Danith the HeartGift, she rejects it and then it is stolen which is tricky since it should not have been able to have been seen to anyone else but them. HEARTMATE was a marvelous, refreshing romance and Robin D. Owens should be commended. It was futuristic, magical, filled with love and set up for more books to come which is all my favorite things. I'm hoping for a sequel or more!

Published by Thriftbooks.com User , 19 years ago
HeartMate won two PEARLS from the Writerspace Paranormal Romance Readers Group: one for Best Fantasy/Magical Book of 2001 and one for Best New Author of 2001, plus an Honorable Mention for Best Futuristic of 2001. Add these to the four stars that Romantic Times Magazine gave to HeartMate and this gets a five star rating for a wonderful new magical world of romance.Rand T'Ash and Danith Mallow are two strong-willed individuals who are each struggling with their own unique magical/Psi abilities and all the ups and downs associated with being from two different social classes. Rand can't quite understand why Danith doesn't readily accept the love which fate has predestined for them. He must learn the hard way that love from the heart is stronger than any bond fate or magic might provide. Nothing comes easy for the inhabitants of Celta, a trend which lends itself to more tales from this fantasy world where not everyone is capable of magic but where everyone is vulnerable to the power of love. Looking forward to the next book in the series.

Published by Thriftbooks.com User , 19 years ago
I understand this is the first for this author, but not the last I hope. It is a great book and held my attention from the beginning. I love books that are different and with an sense of humor as well as believable characters. Robin Owens has both in this book. The fantasy and magic are something else I enjoy. The author uses all of these elements in the story to their best advantage. I cared about about TAsh and about Danith. I can see more stories coming from this book with Holly and his brother for instance. Perhaps also Danith's best friend could have her own love story. She has no flair and can't have children, in this world both are a huge handicape. It would take a special man for her. Please continue writing and could you hurry, I am almost done with this one and want a new one soon. thanks dj

Published by Thriftbooks.com User , 20 years ago
In the delirium of his third Passage when he gained mastery of his psi powers, T'Ash created a HeartGift that binds him to his future HeartMate. He had fashioned a necklace that lacked his current level of graceful craftsmanship, but that holds his creative, carnal energy. The fine jewel in the center is a large roseamber pendant with an inner flaw that takes a different appearance to each person who views it. Only T'Ash and his HeartMate can see the true image captured within. The necklace will attract and affect only his HeartMate. Danith Mallow prefers the charming and whimsical over the expensive and gilt laden. She comes to the jewelry shop because she's drawn to T'Ash's most sensual and original creations. But the stunning necklace that T'Ash holds out to her at once attracts and repulses her. Overwhelmed by her responses to it, she believes he's cast a filthy seduction spell in an effort to win a common woman to his bed. It leaves her feeling cheapened and oddly betrayed. A Null, someone unaffected by psi gifts, steals the necklace from the counter before T'Ash can convince Danith to take it. Worse, an heir to another Great House calls in his debt of honor, forcing T'Ash to focus on another task rather than searching for the necklace and winning his HeartMate. Now his once serene life is suddenly in a shambles. He had believed pursuing his HeartMate would be simple, easy. Instead, the task becomes incredibly complicated and confusing. Danith wants a family, marriage to a simple man, and a peaceful life, not a nobleman with Flair and dubious intentions. T'Ash, the man who once moved in Downwind circles, and now in rich noble circles, is too different than Danith, too intense and too alone. She's an average woman of common birth and was raised in an orphanage. She's learned to accept that there are many things she cannot have, like an extraordinary psi gift, and T'Ash only reminds her of her insignificance. Danith's fears result in a habit of refusing T'Ash, of disbelieving his words and running from him. Yet their destiny drives T'Ash to face her rejection again and again, even though his inept attempts at courtship only seem to infuriate her.Accompanied by his familiar, Zanth, T'Ash will steal the heart of readers with his inept wooing of his HeartMate and his fear of sharing his inner self. His incredible abilities balance a carefully protected vulnerability that makes him endearing to readers. Zanth's attitude about life, that "Life is good," as he stalks sewer rats and arranges jewels also provides excellent amusement. Indeed, author Robin Owens' world of Celta that includes psi gifts and familiars who communicate telepathically is delicious. Rich with humor and nuance, presenting danger on multiple levels while remaining utterly irresistible, HEARTMATE will capture readers' hearts, and leaving them hoping for a sequel. Very highly recommended.
Copyright © 2020 Thriftbooks.com Terms of Use | Privacy Policy | Do Not Sell My Personal Information | Accessibility Statement
ThriftBooks® and the ThriftBooks® logo are registered trademarks of Thrift Books Global, LLC