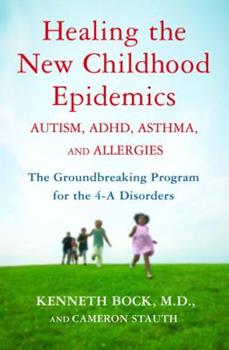 Healing the New Childhood Epidemics: Autism, ADHD, Asthma, and Allergies: The Groundbreaking Program for the 4-A Disorders

Autism is an epidemic: It has spiked 1,500 percent in the last twenty years. ADHD, asthma and allergies have also skyrocketed over the same time period. One of these conditions now strikes one in every three children in America. But there is hope. Leading medical innovator Kenneth Bock, M.D., has helped change the lives of more than a thousand children, and in this important book, with a comprehensive program that targets all four of the 4-A disorders,...

Autistic children can be helped--This book is a blessing!

Published by Thriftbooks.com User , 14 years ago
We have been working with Dr. Bock for about four years and our son (now 18 years old) who is considered to be "on the spectrum" (most said Asperger's; some said PDD-NOS)has made tremendous strides. When I went to my first DAN! Conference in 2004 what immediately surprised me was how the doctors who spoke said it was the parents--not the doctors--who need to take charge of their children's treatment and healing programs. Highly effective doctors like Dr. Bock are very much in demand. Appointments are made months in advance and then you have only so much time with the doctor--not that he doesn't want to give you more time but so many other patients are waiting! Therefore a parent needs to get as much understanding of what the problems are, what the treatments are supposed to do and how they work. Fortunately there are books like this as well as the internet that can provide this vitally needed education. It is clear that there is no one single cause of autism and as a result, no two autistic children are exactly alike. When it comes to autism there are some treatments that aim at treating the effect while others aim at treating the cause. However, it is only the latter that truly promote healing. Healing a child's autism is not like treating an infection with antibiotics. Using natural treatments--vitamin mineral, herbal, enzyme, and nutritional supplements as well as dietary changes and hyperbaric oxygen can result in significant progress but the natural healing process, unlike treating with drugs, is painstakingly slow. Our son's digestion was also helped by another doctor, who gave him a homeopathic remedy. We know that over time all cells in the body are replaced by new ones and my aim and hope is always that any defective cells in the brain or elsewhere be replace by new, healthy ones. This cell replacement process continues throughout life and so I believe there is hope for older people as well. In addition, we try to eat a natural diet and avoid nutritionally useless junk food. It's all been costly and we've pretty much have had to pay out of pocket for everything. But the fact that our son now has friends and is looking forward to going to college next year is for us priceless. I know parents of autistic children who are either demanding that the government do something for them or else they sit around feeling sorry for themselves. There are always things WE can and should do. As for the government, it takes a lot more than it gives and makes us into a nation of guinea pigs by allowing all kinds of toxins into our foods and our environment in general. We all know a spoonful of arsenic can kill you, yet the government allows small quantities of arsenic in chicken feed. Is that going to do anyone any good? As for vaccinations, Americans should know that the government of Japan, the country with the world's highest life expectancy (unlike the U.S., which is around No. 48), banned the MMR vaccine in 1994. In conclusion, thi

GREAT for Newly diagnosed kids with 4-As...

Published by Thriftbooks.com User , 15 years ago
Dr. Bock has done a FANTASTIC job of explaining why the rates of these 4 diseases have gone up and how we can help to heal our kids who have them. Since we're all focused on helping our kids, here are the 4 parts of his healing program: 1) Nutritional Therapy, 2) Supplementation Therapy, 3) Detoxification, 4) Medication, and Putting these 4 therapies together. The 4 changes that he feels strongly have caused these diseases to now effect 1 in every 3 kids are: 1) Toxins Proliferated (in the air, oceans, foods, etc.), 2) Nutrition Deteriorated (fast foods and processed foods), 3) Vaccinations Increased (doubled since 1991), 4) Ability to Detoxify dwindled (methylation and sulfation damage or not working properly). This is a great book for those who are just starting down the road of Autism, ADHD, Asthma or Allergies. It is NOT however, the book that old timers who have been doing Biomedical for years will get much from. It is similar to Jacqueline McCandless' book "Children with Starving Brains" but with much more explanation and details behind it and a great approach that goes beyond just one of the four epidemics. If you have to choose just one book for a new parent to read to get them off the ground and jumping towards Biomedical approaches for their child's A-disease, this is it.
Trustpilot
Copyright © 2022 Thriftbooks.com Terms of Use | Privacy Policy | Do Not Sell or Share My Personal Information | Accessibility Statement
ThriftBooks® and the ThriftBooks® logo are registered trademarks of Thrift Books Global, LLC