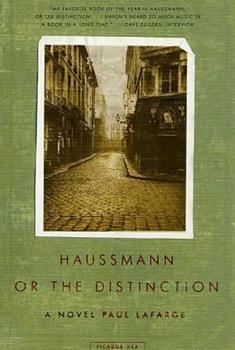 Haussmann, or the Distinction

A stunning, imaginative novel about the great architect of Paris Baron Georges-Eug ne Haussmann, who demolished and rebuilt Paris in the middle of the nineteenth century, was the first urbanist of the modern era--and perhaps the greatest. He presided over two decades of riches, peace, and progress in a city the likes of which no one had ever seen before, with boulevards monumentally conceived and brilliantly lit, clean water, public transportation,...

Published by Thriftbooks.com User , 19 years ago
Framed as a 1920s novel by an obscure French poet, based on the life of Baron Georges-Eugene Haussmann, the ambitious mid-19th century Prefect of Paris, LaFarge's ("The Artist of the Missing") second book transports the reader to a cramped, unsanitary, venerable Paris in the midst of its transformation to a modern airy city of wide boulevards and functional sewers - as envisioned by Haussmann.The narrative opens by questioning the story that on his deathbed Haussmann regretted his modernizing zeal. "Regret is a backward-turning emotion, and the Baron was famous for straightforwardness; he made the boulevards and razed the crooked lanes where tanners' sheds fronted cracked courtyards and sewer ditches spilled over into the bins of wire and paper petals of the artificial-flower makers for which the city, before his arrival on the scene, was famous."This regret is the thread the all-but-omniscient narrator follows from the old Paris that spawned a great, clandestine love, to the ambition and modern rigidity that crushed it, leaving a bitter thirst for revenge in the ruins.Haussmann's lover, Madeleine, was born in 1840 in the tumult and squalor of old Paris. "Born to a tanner's dying wife, she was dropped in the Bievre. There she was saved by pollution, for the river was already so laden with debris that nothing more could sink into it." Fished out by a lamplighter who encourages her to regard the mystery of her birth as a special emancipation, and later raised in a convent where the nuns suspect a noble lineage, Madeleine's discovery of her actual parentage drives her to flee into "the cool, criminal indifference of the street."When she surfaces again, she has found refuge in the home (and arms) of M. de Fonce, the "demolition man" who has grown rich on the clean sweep of Haussmann's modernizing broom. De Fonce has schooled himself in the value and appreciation of "the overlooked" and rich Parisians flock to his door for souvenirs of Paris' vanished buildings. And there, Haussmann meets Madeleine.LaFarge's style is exuberantly Dickensian - full of painterly detail and droll quirks. The rounds of the lamplighter in old Paris are as vivid as the well-organized domicile of the Prefect or the subterranean warrens of the Paris library. Good natured ridicule is heaped equally high on the "celebrated decorum" of the court of the nervous Emperor Louis Napoleon and the flamboyantly artificial balls of the demi-monde. Much is made of hypocrisy, venality, greed and ambition. The serpentine plot winds through political and amorous intrigue, building to a frenzied crisis over Haussmann's grand plan to move the Paris cemeteries outside of the city and build a Railroad of the Dead.His characters are richly and lovingly imagined, their foibles and fancies turned out with affectionate humor. Madeleine as a young convent girl fond of cats: "And Madeleine loved most of all that which was catlike in herself, in other words, that which achieved freedom without struggle
Copyright © 2022 Thriftbooks.com Terms of Use | Privacy Policy | Do Not Sell My Personal Information | Accessibility Statement
ThriftBooks® and the ThriftBooks® logo are registered trademarks of Thrift Books Global, LLC