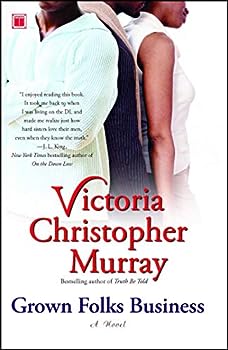 This description may be from another edition of this product. Sheridan's husband wanted to stop living a lie, but how is she going to live her life knowing the truth? "There's no other way to say this. I'm in love with someone else." With these words, Sheridan...

Honey, I Got A Secret

Published by Thriftbooks.com User , 16 years ago
What do you do when the man that you have loved for the past seventeen years tells you he is unhappy with you and has fallen for man? Just days into the beginning of a brand new year, Sheridan Hart's life is turned upside down when her husband, Quentin makes this statement. Dealing with her own feelings of shock, disbelief, shame and humiliation, she must relay this news to her children, family and friends. How will they react? How can she face the church members, friends and family? Victoria Christopher Murray answers all these questions and more in her latest offering Grown Folks Business. Sheridan Hart is stunned when her supposedly God-fearing Christian husband, Quentin announces that he is gay. It is a secret he has been keeping for many years and has finally decided that he can no longer live a lie. His announcement makes Sheridan take a look at herself. She has to deal with feelings of inadequacy as a woman and a wife. How she reacts to Quentin as a Christian is being scrutinized by church members. She gets conflicting responses from friends and family. She knows what the Word says one ought to do and she has her pastor looking out for her best interest, but she still finds it difficult to take the Christian route. The children, Chris and Tori, have two different extreme reactions. Sixteen year old Chris refuses to have a relationship with his father and denounces everything in his life prior to his father's coming out. On the other hand, nine year old Tori is accepting of her father. Unconditional love allows her to maintain a relationship with him and to accept her father's partner. Just barely getting over Quentin's betrayal, another man enters Sheridan's life. Now, she must decide if having a relationship so soon after her breakup is the right thing to do. My book club had an enlightening discussion regarding the many issues found in Grown Folks Business, foremost being homosexuality, fornication and unconditional love. We all agreed Victoria is one of the best when it comes to extracting emotions from her readers. Though the consensus was we did not really care for Sheridan as a person, we could empathize with all that she was going through; we cried when she cried and rejoiced when she rejoiced. Even when Brock entered her life, we could understand her relationship with him. Initially, I had my doubts when I found out this was one of those "my husband is on the down low" books, but Victoria took this subject to another level and really got inside the heart and heads of the characters. I highly recommend this book. Jeanette (...)

Published by Thriftbooks.com User , 16 years ago
I first fell in love with Victoria Christopher Murrays' writing style with her very first book, Temptation several years ago. Several novels later, I am not disappointed. While I loved Temptation, Joy and Truth Be Told, GROWN FOLKS BUSINESS is among my very favorite summer reads!! DL men and the women who love them (or) were left by them have been all the buzz, and Christian women alike have been trying to sort through the various emotions of the realization, that DL was happening in everyday life and in some cases their very own lives. With GROWN FOLKS BUSINESS, Murray has masterfully spun a delicious fast paced read with just the right doses of spirituality and faith that is sure to make GROWN FOLKS BUSINESS a bestseller while an answer to prayer for every woman, every age. Let's follow Sheridan as she relies on GOD as never before. If you didn't believe GOD was with you in the storms of life, you will definitely see HIM present in Sheridan's. GROWN FOLKS BUSINESS is a page-turner. A stay in all weekend and up all night type of novel. You'll love it and don't forget to grab one for a friend or two, too. You'll have lots to talk about! Reviewed by Marina Woods, The GOOD GIRL Reviewers, www.goodgirlbookclubonline.com

It had me from the very first sentence.

Published by Thriftbooks.com User , 16 years ago
This book was bound to be written since the great fervor erupted over J.L. King's nonfiction book "On the Down Low". I'm glad that it was written by Victoria Christopher Murray, one of my favorite authors. Ms. Murray is a wonderful story teller that seamlessly blends a Christian message into a good storyline. Her style is classic novelist who happens to be a Christian, rather than preachy Christian who wants to write a novel. In this story, Sheridan's world is turned upside down in the first few sentences of this book as her husband tells her that he is in love with someone else. As she begins to ponder who the woman could be that has intruded on her lovely marriage, the situation becomes emotionally unbearable as she is informed that her husband is in fact in love with another man. After seventeen years of an idyllic marriage, this is the last thing Sheridan was expecting to hear. After insisting that he pack up and leave, Sheridan is left with the aftermath of this situation. She struggles with how to help her young daughter, an unabashed daddy's girl, and her teenaged son deal with the news about their beloved daddy. As her son rebels and she deals with the input and judgments of family members and church members alike, Sheridan has to truly call upon her faith to see her through this situation. Like so many, Sheridan realizes that it's not so easy to turn off the emotions that have been nurtured for nearly two decades. A story line such as this could quickly descend into clichés, comedy or worse. Yet, Ms. Murray writes a story that builds sympathy for all involved. Rather than simply display Sheridan's husband as the villain and Sheridan as the victim, the author teases apart the psyches of all involved resulting in a compelling story of what could happen when life is turn upside down unexpectedly. Through it all, Sheridan's Christianity and faith are strong foundations at every turn of uncertainty. I must admit when I heard the subject matter of Ms. Murray's latest novel, I worried that the overexposure of J.L. King's book and R. Kelley's latest song series on the same topic was indicative of a topic overexposed and over dissected. However, to my delight and surprise, Ms. Murray brought a fresh, thorough view to the subject with her characteristically good storytelling style. Well done!

From A Woman's Pespective

Published by Thriftbooks.com User , 16 years ago
After E.Lynn Harris' shocking Invisible Life novel, we have now been trained to consider that it could happen. And yet, when Sheridan's husband tells her that he is in love with another man, the news is overwhelmingly painful. How does a woman deal with the impact of this news on her teenaged son whose manhood he feels is now called into question? How does she handle her young daughters questions about why Daddy doesn't live here anymore when she knew her parents were in love? Victoria's new book, Grown Folks Business, takes a look at the impact of this particular type of infideity, on the wife, her children, her family and church members and the result is a very well writen novel giving us the story from the woman's perspective. As expected in a book by Victoria, Sheridan's faith and her belief in God are the means by which she moves through this storm to another place where there is peace and once again joy and love. A real page turner, I am sure you wil be hooked from reading the first few pages. Enjoy

Published by Thriftbooks.com User , 16 years ago
Happily in love with her husband, Sheridan Heart is caught off guard when one morning after breakfast and kissing the kids goodbye, he tells her he's in love with someone else. Because they just celebrated Christmas and New Years with gifts of love and words of adoration, somehow his statement doesn't fit. When asked to repeat himself, he does and goes on to say that he's actually in love with a man. Sheridan's world stops as she tries to grasp the fact that the church-going, loving, and sensitive man isn't quite who she thought he was. For the past seventeen years, he's been keeping a secret that makes her question if their great love is a lie. Amidst dealing with her own feelings, Sheridan must temper those of her two children, adjust to the attitudes of her parents, and learn when to ignore those of her church and community. She has to rely on her instinctive reactions to her husband's confession and also learn how to be patient and let him get through his problems. Though no one is sure exactly how things will turn out, it's evident that with God, all things are possible. This is a heart-wrenching story of a woman's loss, pain and sorrow, brought about by the one person who promised to love and protect her. GROWN FOLKS BUSINESS is to be lauded for its relevance to our changing world, the lessons on love and forgiveness, as well as, how trust and faith in God can get a person through even their darkest times. Victoria Christopher Murray is one of my favorite authors, not just in the Christian Fiction genre, but she is known across genres for her ability to help the reader connect with the characters, offer compassion, and open one's eyes to all facets of a situation. Because of its subject matter, it should be read by everyone, not just by those merely looking for entertainment as it offers so much more. Reviewed by Tee C. Royal of The RAWSISTAZ™ Reviewers
Copyright © 2020 Thriftbooks.com Terms of Use | Privacy Policy | Do Not Sell My Personal Information | Accessibility Statement
ThriftBooks® and the ThriftBooks® logo are registered trademarks of Thrift Books Global, LLC