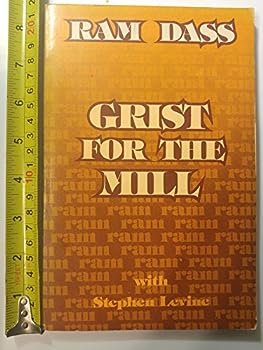 Grist for the Mill

by Ram Dass and Stephen Levine

From Ram Dass, one of America's most beloved spiritual figures and bestselling author of Be Here Now and Be Love Now, comes this timeless classic about the experience of being and the risks and... This description may be from another edition of this product.

Published by Thriftbooks.com User , 15 years ago
Richard Alpert has had a long, strange, wonderful trip. One of the best public speakers I've ever seen, back in the 80s when he was in top form, he used to turn a roomful of people into a group of one in minutes. His books, which are largely transcriptions of his public speaking, reflect this to varying degrees. The two most successful, to my mind, are The Only Dance There Is and Grist For The Mill. Grist is an excellent introduction for someone who's seeking a higher path but is put off by organized religion. Ram Dass (or Rum Dum as his Dad called him; I always crack up when he says that on his tapes) is a master at making spiritual growth seem natural and simple and just something you do when you're ready to. There are so many fine stories and moments in this book; I still remember the exact moment I was sitting on an SF trolley and read this thought (paraphrased): "But often you'll find that once you finally get the Cadillac you dreamed of for years, the guy who wanted the Cadillac is gone." That thought has resonated in my mine like a Tibetan bell so many times over the past 20 years, and it just keeps getting truer. Rum Dum dispenses with most of the hokey pokeyness of many westerners gone east, and separates the wheat from the chaff. Simple instructions on various modalities of thought and action that lead gently to enlightenment are his forte, and his concepts tend to stay with you for a long time. Not to mention that it's just a gas to read; he can be a very funny guy! If enlightenment doesn't lead to happiness and contentment, I ain't buying. Here's a fellow who's living proof that we can all grow as much and as long as we choose to. Namaste, brother.

My father never knew me

Published by Thriftbooks.com User , 16 years ago
This book is full of stories that communicate what it means in daily living to "Be Here Now." In one story, as Ram Dass is living in India following his spiritual quest, his father calls to inform him that his mother has died. He returns home wearing a robe, long hair and beard, not looking at all like the law student his father remembers from only a year earlier. His father, one of the founders of Brandeis University and former President of the New York, New Haven & Hartford Railroad, is so embarrassed that he doesn't want his friends to see them together. How they relate to each other over the next few days, for example, in the simple act of making raspberry jam, will open your heart.

Overall, the best book general book to help one awaken

Published by Thriftbooks.com User , 17 years ago
this book changed my life. he just presents everything in such a non-judgmental, joyful and hilarious way, it makes you think and feel while truly realizing that everything's gonna be all right. Ram Dass is my first true spiritual hero and, after fifteen years and countless other books and teachers, he still remains at the top. For anyone who is beginning to awaken or wants to -- this is a fantastic place to start!

Published by Thriftbooks.com User , 18 years ago
Grist For the Mill/Be Here Now. These two books I've had for years and every now and then find on my bookshelf and read them for the I don't know how manyith time. There's one part where Ram tells how he's been fasting for seven days. He's visiting his publisher who tells him he's looking a little pale, a little thin. Ram says he's on a ten day fast. As he leaves the publisher's high-rise office building, exits the elevator, he passes a homeless person who says, "Hey man, can you help me? I haven't eaten for seven days." Ram says, " That's great, you just got three more to go." Where we're at doesn't mean that's where our friends' are at, our husbands, our wives. We are so self-concerned the rest of the world barley exists. This book will help you see others' points of view in a way no self-help book ever can. Making Raspberry Jam, one of many stories in the book, is about his father. Ram is living in India, he's dropped out of Harvard Law School to study with his Buddhist Master, and gets a call from his father that his mother has died. He gets off the plane wearing a robe, long hair, beard, not looking at all like the Law Student his father remembers from only a year ago. His father, a snobby Boston Banker, is embarrassed, doesn't want his friends to see them. How they relate to each other over the next few days will make you laugh and cry, and remind you of your parents, maybe your children. It's a story you will remember for the rest of your life, and you'll tell it to your friends. Some will get it, some won't. The whole book is that way, filled with stories and insights into human nature. Buy the book just for the Raspberry Jam story and it will be worth it. If you can find hardcovers buy them both. You'll be reading these books many times. I enyoy these two books so much that if you'd like to chat about them please email me, deanaustin@earthlink.net

Published by Thriftbooks.com User , 23 years ago
This book really helped me bring more of my spiritual growth into my daily life. Most of the spiritual books I have read have been written by non-Americans with monastic backgrounds, and the disconnect in lifestyles has been the most difficult thing to bridge. I understand more fully now what the eastern teachers are talking about when they say that America has to create its own traditions from the teachings.
Trustpilot
Copyright © 2022 Thriftbooks.com Terms of Use | Privacy Policy | Do Not Sell My Personal Information | Cookie Preferences | Accessibility Statement
ThriftBooks® and the ThriftBooks® logo are registered trademarks of Thrift Books Global, LLC