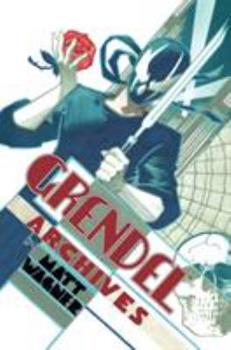 (Part of the Grendel Behold the Devil Series)

A successful novelist by day, Hunter Rose becomes the unstoppable assassin Grendel by night, the leader of a vast criminal empire opposed by the mysterious wolf Argent. Containing the black-and-white interiors and full-color covers of Primer #2 and Grendel #1-3 originally published by Comico, this handsome hardcover volume is an essential piece of comics history, presenting the earliest work of Matt Wagner, the legendary creator behind such acclaimed...

Devil by the Deed the beginning drawings of a craftsperson

Published by Thriftbooks.com User , 13 years ago
You just do not see much about the wildly popular Grendel Comics from Comico written by Matt Wagner and the Pander Brothers. Nor is it easy to find many of the early books written by Matt Wagner on his own. That is unfortunate, but maybe it is time for a new generation to discover the character. Dark Horse and Matt Wagner have been slowly releasing their works back into circulation which is a very good thing to do. The premise of the Grendel series was that various people snap and then take on the character exacting bloody revenge on the problems and issues of the day. Some are darker than others, some explore human issues, those times where we could be stronger about our principles and morals but fail abjectly. The Archive Edition is the first primitive run at what would end up becoming the basis for Devil by the Deed. This early portrayal, the stirrings of a comic book artist is clearly seen amidst the poor beginnings of what he was doing. There is nothing more interesting than the first drawings of a kid, as Matt Wagner was 21, still very new at his craft, you can see the latent genius in the work, but not in this book. If you want the polished work, go get Devil by the Deed, if you want to see how the idea started and took form, to see the early artist, then you will get this book. This would be great for people who are wondering how to get started, or how to learn to draw. This book debunks every myth that all comic book artists start off great. Grendel will influence you, these are much more than comic books, in many ways, Matt Wagner has hit on one of those few universal meme's, power, revenge, anger, that consumes the actor in the end.

Published by Thriftbooks.com User , 13 years ago
This is where it all started. The artwork in Grendel Archives is not as crisp as some of Matt's later work, but the story is as unique and multi-dimensional as the best comic stories out today. Even in these early stories you can see that Matt can blend so many different writing and artistic styles and story elements. From film noir to native traditions, he fuses it all into one slightly strange but incredibly cohesive piece. Get this collection!

Published by Thriftbooks.com User , 14 years ago
In 1984, Matt Wagner began including a backup feature in his ongoing Mage series. This feature retold the origin of his character Grendel, based on the 1982 - 1983 stories in Comico Primer #2 and Grendel # 1-3. This retelling was eventually collected as GRENDEL: DEVIL BY THE DEED, but the original stories remained out of print, and it was rumored that they would never be collected due to Wagner's embarrassment at the quality of his earlier work. Well, now we have evidence to the contrary with the release of the hardcover GRENDEL ARCHIVES, and Wagner makes a point to dispel any rumors in the introduction, inviting the reader to judge for themselves. The story follows the rise of Hunter Rose, celebrity novelist and international fencing champion. Of course, Hunter has another side: the master criminal and assassin Grendel. He will stop at nothing to expand his empire, even though he is opposed by the bizarre wolfman known as Argent. While the difference in quality between this original story and "Devil by the Deed" is obvious, I appreciate the opportunity to have these stories in my hands, as I am a newcomer to the whole Grendel phenomenon and want to start at the beginning. I'll be honest: Wagner's story is at times clumsy, especially with its eventual transformation from an intriguing origin into a standard murder mystery, complete with parlor room exposition. In addition, the art is obviously from someone who was just starting out in the field. Still, it's apparent that Wagner had some established ideas for this character, and his page layouts were very promising. The design of this hardcover is beautiful, with a wraparound cover, glossy paper, and cardstock reproductions of the original covers bound into the book. Overall, this is an excellent showcase of early work from one of the great creative forces in modern comics. Do you need to read it in order to enjoy the Grendel saga? No, but it may increase your appreciation and understanding of what Matt Wagner was trying to do.

Published by Thriftbooks.com User , 14 years ago
I know some people would argue that Matt Wagner's first steps into the world of comics don't deserve a four star rating. I disagree. While I will admit that they certainly lack the polish of his later work (both from a writing and an artistic standpoint), the energy and enthusiasm he so obviously put into these issues makes up for much. And, much like his other hallmark work, Mage: The Hero Discovered, one can actually see his style evolve from issue to issue (though Mage offers a much longer look at that evolution with consequentially more satisfying results.) Still, I found this to be well worth the price (especially considering I'd spent a good bit of money a few years ago trying to collect the issues contained herein.) Just don't expect any of the grace or adaptability Wagner shows in his later work (or even a finished story, as issue three ends on a cliffhanger that was not resolved until the reimagining of Grendel as a back-up feature in the aforementioned Mage series (and collected as Grendel: Devil by the Deed.)
Copyright © 2022 Thriftbooks.com Terms of Use | Privacy Policy | Do Not Sell My Personal Information | Accessibility Statement
ThriftBooks® and the ThriftBooks® logo are registered trademarks of Thrift Books Global, LLC