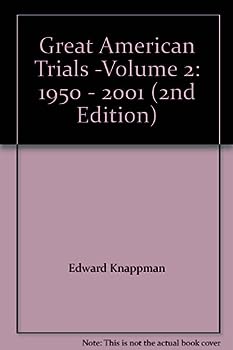 An extraordinary introduction for anyone contemplating a legal career; for the rest of us it is a fine reference and a delight to read. -- Chicago Tribune. Two hundred historically significant,... This description may be from another edition of this product.

Published by Thriftbooks.com User , 13 years ago
As much a history of the United States as it is of the great trials. From the mid 1600s (with trials involving religious heresy, insanity defence, impeachment, etc.) to the Rodney King trial of 1992, this book covers all the important ones.Hard to put down--reads like a thriller. Also a brief, but informative discussion of the law.There won't ever be a better book on the subject.

Published by Thriftbooks.com User , 19 years ago
I read this book straight through-- more as a history of the legal system in the colonies and the United States than as a reference book. I was engrossed by the stories behind many of the cases. Some of the cases I recognized from law school. It would have been much more interesting to know the "story" behind the cases when studying them in school, although I am certain my law professors would discourage the notion of letting "unnecessary facts" get in the way of legal analysis. (Hey, that is the kind of things lawyers like to say... :o)...)This book provides a resource like none I have been able to find previously. When read chronologically, the cases give one another a sense of historical context often absent from the study of the law. And the law-- as a reflection of society-- makes an interesting way to study history. Although I knew it cerebrally, it was amazing to read of women being arrested for voting, courts deciding whether persons from Africa were human, mentally ill women being routinely steralized, and convicted killers hanged by their necks within days of their convictions. And this is within the last 125 years! That we have come so far, so quickly gives hope for our future.So... Why only four stars? Two reasons, as the title demonstrates: This book is desparately in need of an update and an edit by an attorney. As for the datedness, this book stops in 1994. While it includes the trial of the officers who battered Rodney King and the William Kennedy Smith rape trial, it was published prior to some cases that have transformed the ever-changing legal landscape over the past ten years. The criminal and civil trial of O.J. Simpson, the mutilation trial of Loreana Bobbitt and her sucessful insanity defense, and the Louis Woodward/"Nanny Murder" trial with its questions of overcharging and judicial review of jury verdicts belong in this volume. I felt as if I had watched a movie, wanted a sequel, but there was none coming.Technically, the use of legal terminology was not always correct. For example, post-trial motions are referred to as appeals, and vice-versa. These are small details that irked me a tad as an attorney, though I doubt they would distract anyone who didn't attach specific meaning to these "terms of art."This is a excellent, enjoyable, almost-addictive read. And it has accomplished more than any of the "true crime" books to which it could be compared but which it greatly overshadows: It has made me want to learn more about several of the cases in the book and several other cases I remember from law school. A book that can entertain, educate, and stimulate is a wonderful thing.

Published by Thriftbooks.com User , 21 years ago
Great American Trials gives a two or three page summary of the most well known trials in American History. The editors begin with trials from more then 350 years ago and end in the mid-1990s. The consistant quality and detail found in this book is remarkable. It is a very good reference book and an interesting collection of stories as well.For example, do you know what is spectral evidence? Spectral evidence was the belief that the Devil could appear in a person's form, but ONLY to people the devil wanted to tomment. No one else could see this image. Since only the tormented could "see" this image, only they knew who the Devil was working with. What would happened is a tormented person lied? Or was crazy? The Salem's Witch Trial was one result when this type of evidence was used.From this starting point, this book again, and again, teaches the reader amazing facts and laws from our past. The best part of this book is how easily each story flows. You read this book because each story is enjoyable. At the same time, you learn about U.S. History and U.S. Law. Some things in our past, like the Salem Witch Trial, was shocking to most people today. Other things, like the "Amistad" trial, (called "U.S. v. Cinque"), where black slaves were freed by the American Courts in the 1830s, may fill you with pride. Still other cases, where ministers are on trial for slander, 200 years before Jim Baker, remind us of the enduring and consistant qualities of men. All and all, this book is fun, easy to read, and a fun trip into our past. I would think it would be especially interesting to teacher, lawyers, and anyone with a love of history.

A wonderful way to teach history and law in the classroom.

Published by Thriftbooks.com User , 23 years ago
I have used this book in a high school law class for the past three years. Although I use other materials, the structure of the book is a wonderful way to teach history, while learning basic law concepts. For example, the facts of the Sickles trial always "hooks" the students, yet it serves as a wonderful way to teach mens rea and actus reus. My students after studying Dr. Mudd's trial learn more about the Civil War than in a standard history class.

Use in the Classroom

Published by Thriftbooks.com User , 23 years ago
This book is great to use in the classroom. It can be used to get students involved with a historical time period. The book is a great framework for students and teachers that want to study history or the law.
Copyright © 2022 Thriftbooks.com Terms of Use | Privacy Policy | Do Not Sell My Personal Information | Accessibility Statement
ThriftBooks® and the ThriftBooks® logo are registered trademarks of Thrift Books Global, LLC