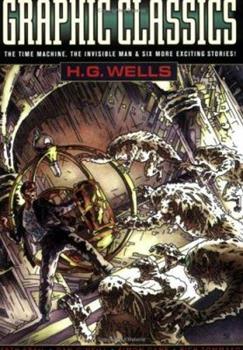 (Book #3 in the Graphic Classics Series)

Graphic Classics: H.G. Wells is a completely revised second edition of the third volume in the Graphic Classics series. It features three new comics adaptations: "The Time Machine" by Antonella Caputo and Seth Frail, "The Invisible Man" by Rod Lott and Simon Gane, and "The Inexperienced Ghost" by Tom Pomplun and Rich Tommaso. Plus returning stories adapted by Dan O'Neill, Skip Williamson, Milton Knight, Brad Teare and Nick Miller, including the story...

Review of "The Star" in the Graphic Classics H.G. Wells Collection

Published by Thriftbooks.com User , 14 years ago
The Star by H.G. Wells; illustrated by Brad Teare. In Graphic Classics, H.G. Wells, Vol. III. The Star is interesting because it deals with man's survival in the face of certain death. The graphic novel paints two pictures: one, the decline of humanity; and two, the overall impact of the "star" on the earth. --- The review above was submitted by a student in my class. (J.C.) --- The use of graphic novels and stories in my classroom has been inspiring to my students. Sometimes, students need the visual aids to process the vocabulary used in these stories, many of which do not translate to our technology-driven culture. It is difficult for a student who has never lacked for clean water and electricity to comprehend a situation in which they had none of the standard accomodations we take for granted.

Published by Thriftbooks.com User , 15 years ago
Being a big fan of classic and horror literature I happened across these books quite by accident . I was immediatley struck by the talent of the artists across the board ranging from the comedic interpretations to the serious. These graphic novels are a wonderful way to access Well's work whether you are a novice or devoted follower. But be warned they are addictive and you will want to colleect the whole series .

The Invisible Man and The War of the Worlds

Published by Thriftbooks.com User , 16 years ago
H.G. Wells wrote some amazing stories. There are so many classic tales it is easy to forget that they all come from the same talented man. Of course, he is one of the founders of Science Fiction, single-handily creating many of the sub-genres that can be found within its boarders. The alien invasion, the insane scientist who falls victim to his own experiment, the vision of a dark apocalyptic future, they all come springing from Wells's brain. Graphics Classics has again taken these fantastic tales and mixed them with talented illustrators for a unique storytelling experience. Nine stories in total have been adapted, from his most famous epics to a few sharp satires. The blend is nice, highlighting Wells's skills beyond what is generally known. This volume contains: The Invisible Man - One of Wells's most renowned adventures, and one of the best-adapted from the Graphics Classics series. The story is longer than is usually found in Graphics Classics, and is allowed to play out in its brutal entirety. The art is especially well-suited to the story, giving a cartoony and Victorian feel. The Inexperienced Ghost - What starts off as a humorous tale of a ghost who isn't sure how to be a ghost, this ghost story takes an odd turn when a human tries to enter the ghost world. A melancholy ending. The Man Who Could Work Miracles - A cautionary tale about the dangers of wish-fulfillment. Especially when the Miracle Worker isn't too bright. The Temptation of Harrington - A text-with-pictures adaptation of an artist and his business. The War of the Worlds - Instead of adapting Wells's popular invasion yarn, this tells the tale of the infamous Halloween night when Orson Welles broadcast his radio adaptation, and the US nation panicked. Le Mari Terrible - Another text-and-pictures adaptation. Short and sassy with a great piece by Lisa K. Weber. The Man with a Nose - A very odd story of a man with the world's ugliest nose. The Time Machine - Another long adaptation, with some great art. A fearful vision of the future of mankind, with the Morlocks looking nice and freaky. The Star - A short but interesting tale of the unimportance of humanity, when seen in context of the whole planet. The art is excellent.
Trustpilot
Copyright © 2022 Thriftbooks.com Terms of Use | Privacy Policy | Do Not Sell My Personal Information | Accessibility Statement
ThriftBooks® and the ThriftBooks® logo are registered trademarks of Thrift Books Global, LLC