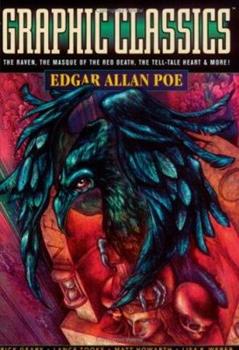 (Book #1 in the Graphic Classics Series)

Graphic Classics: Edgar Allan Poe is completely revised, with over 40 pages of new material. New to this edition are comics adaptations of "King Pest" illustrated by Anton Emdin, "The Imp of the Perverse" by Lance Tooks and "The Premature Burial" by Joe Ollman. Plus a newly-illustrated version of "The Raven" by 10 great artists. Returning from the previous edition are "The Tell-Tale Heart" by Rick Geary, "The Fall of the House of Usher" by Matt Howarth...

A Lot Of Fun

Published by Thriftbooks.com User , 13 years ago
Like the writings of his fellow American fantasists Edgar Rice Burroughs, H.P. Lovecraft, and Robert E. Howard, the work of Edgar Allan Poe cries out to be illustrated; so it's no wonder the folks at Eureka Productions chose to begin their series of Graphic Classics with a collection of illistrated tales and poems by this master of the macabre. They've hardly stinted on the talent, either - artists include the great Richard Corben (creator of the character Den seen in the film Heavy Metal (Collector's Edition)), the insane and ingenious Maxom Crumb (known from the excellent Terry Zwigoff film Crumb (Special Edition) and younger brother of underground comix great Robert), and Alan Moore collaborator John Coulthart (The Haunter of the Dark: And Other Grotesque Visions). Award-winning writer Joe R. Landsdale (The Bottoms) provides the introduction. This collection strikes me as an incredibly useful book - teachers can use it as a remarkably faithful and accessible introduction to one of the giants of American literature; comics fans, to introduce themselves to a marvellous storyteller; and Poe aficianados can see some the greatest talents currently working in the fields of comics and illustration. Oh... and if you're somebody who just enjoys a good scary story, you'll have a lot of fun with this, too - and who doesn't like a good scary story?

Published by Thriftbooks.com User , 14 years ago
Great artistry behind one of the best poets of modern time. My personal favorite, The Raven, was put into wonderful artistic views. A must have for any Poe Fan.

Published by Thriftbooks.com User , 14 years ago
Edgar Allan Poe Graphic Classics Okay, I get the point. Having read all of Tom Pompluns' classic compilations, I have often thought `Why not get mainstream artists? I'm sure John Byrne would do one for him? Hey, Steranko? What about Wiacek? Or Perez?'. But, call me slow, this collection of stories has opened the door. The tales he has chosen to adapt, and the artists he has assigned the work to, work. Why? In a twisted way, the sheer esoteric nature of the Poe, Twain, Stevenson, Doyle, Bierce, and Lovecraft stories match the highly stylized artwork from Geary, Weber, Howarth, Knight, Shaw and others. Put a story like King Pest into the hands of Frank Brunner, and you have a masterful piece, that may miss the off mark. Brunner is fantasy. Pest is satire, at its' best. Neal Adams doing the Cask of Amontilado would be a visual feast, but the art would overshadow the terror of the story. Some of the art in this volume does not necessarily make the tale sing, but it does put the onus onto the writer and as a team, it either does, or does not work. Most of these work. This volume includes The Premature Burial, Imp of the Perverse, King Pest, The Tell Tale Heart, Masque of the Red Death, Hop Frog, Never Bet the Devil Your Head, Cask of Amontilado, Fall of the House of Usher, and the Raven. A couple of these are reprints but 40 of the 144 pages are new. Because of the new material, the book has a `new' feel to it. Of the stories here, I had never heard of half of them. King Pest is a hoot. Hop Frog is delightful. The Imp of the Perverse is perverse. And the Premature Burial is masterful. Material from a genius like Poe should never be forgotten. What the heck Tom, I bet Steranko would do a cover!! Tim Lasiuta

Gothic comics - An outstanding blend of words and pictures

Published by Thriftbooks.com User , 17 years ago
Edgar Allan Poe is a natural choice as the first volume of the Graphic Classics volumes, a series partially inspired by the Classic Illustrated collection of comic books, which attempted to lure young readers into reading respectable, "classic" authors through the comics medium. This new incarnation, however, takes an entirely different tact, combining fantastic literary stories with equally talented artists for something that is far more entertainment than education. Also, while these are "comic books," the illustrators are far more "New Yorker" than "Fantastic Four." Creative, individualistic and highly stylized, each artist leaves their own distinctive mark on their story, creating a unique experience, a collaboration between author and artist. This 3rd Edition of "Graphic Classics: Volume 1 - Edgar Allan Poe" assembles nine short stories and three poems of the master, including his most famous works as well as some less well-known. Each is given a different treatment, ranging from illustrated text pieces to full comic strips. Each is of very high quality, making this book highly recommended. Included in this volume are: "The Tell-Tale Heart" - My first Edgar Allan Poe story, that I was assigned to read in Jr. High School, is still a provocative and powerful piece. Artist Rick Geary gives us a straight-forward rendition, including a lovingly detailed picture of The Eye. "King Pest" - A story of plague-ridden London, where two hapless sailors find themselves guests at the table of the King and Queen of pestilence. Anton Emdin's grotesque illustrations add a nice comic flair to the tale. "The Premature Burial" - A claustrophobic tale of fear of premature burial, and how we often create the demon's that haunt us. Joe Ollman does a splendid job of creating atmosphere, and the panic of being buried alive. "El Dorado" - This one I liked a lot. A semi-humorous cartoons style brings the point of the sad poem home even more fiercely. "Spirits of the Dead" - A surrealistic adaptation of a quiet Poe poem, ruminating on death. "The Imp of the Perverse" - Like "The Tell-tale Heart," a story of the sting of guilt, and how a perfect murder is never as perfect as we would like to think. "The Raven" - A new adaptation of Poe's masterpiece, this is an assemble version with a different artist doing a different stanza. It comes off beautifully, allowing Poe's words to be the true star of the show. "The Masque of the Red Death" - A text-and-pictures adaptation,full of the stunning delights of Propero's hidden Bohemia, and the plague of the Red Death that intrudes on their party. "Never Bet the Devil Your Head" - A wild and funny adaptation of a wild and funny story. An excellent ending. "Hop-Frog" - The text is presented in its entirety, and the artists is so completely well-suited to this story that I think I will forever see the foolish fat king and his eight fat friends as portrayed by artist Lisa K. Weber. "The Cask of Amontillado"

Each black-and-white rendition is by a different artist

Published by Thriftbooks.com User , 18 years ago
Compiled and edited by Tom Pomplun, Graphic Classics: Edgar Allan Poe is an outstanding graphic novel anthology of diverse comic-book style adaptations of classic stories and poems by the legendary Edgar Allan Poe. Included are "The Raven", "The Cask of Amontillado", "The Tell-Tale Heart", and nine others. Each black-and-white rendition is by a different artist, and the styles range from gruesomely realistic to extravagantly bizarre; all of them deftly capture Poe's brilliant and sometimes shocking dialogue, plots, and the helplessness of man. Also very highly recommended from their "Graphic Classics" series are the Eureka Productions graphic novel editions of H.P. Lovecraft (0971246440); Ambrose Bierce (0971246467); and Bram Stoker (0971246475).
Trustpilot
Copyright © 2022 Thriftbooks.com Terms of Use | Privacy Policy | Do Not Sell My Personal Information | Accessibility Statement
ThriftBooks® and the ThriftBooks® logo are registered trademarks of Thrift Books Global, LLC