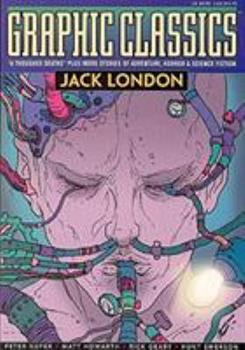 (Book #5 in the Graphic Classics Series)

Weird and Wild tales from an American master

Published by Thriftbooks.com User , 15 years ago
Think of Jack London, and the image springs to mind of racing dog packs racing over icy Alaskan landscapes, fighting fang and fur in a primitive struggle for life. On the reading list of almost every American school system, "The Call of the Wild" is a classic of American literature. And there it stops. Aside from "The Call of the Wild," I was totally ignorant of Jack London's works. I never knew his clever since of humor, or his ability to delve into mystery and unknown lands. He always seemed an author very much grounded in hard reality. Graphic Classics has again taken a treasured author and produced some fantastic adaptions of his lesser-known yarns. Editor Tom Pomplun has a great eye at matching artistic style to the tone of the story that makes each collaboration a treat. He also picked a wide selection of London's stories, showing a breadth of talent that most readers were not aware of. This collection features: The Red One - A classic pulp adventure tale featuring head-hunters, native romance and a massive, unearthly artifact that pules with an ominous sound. This one would have been right at home in Weird Tales. Artists Mark A. Nelson keeps the art rough and realistic, just the way it should be. Jan, the Unrepentant - A very funny little short story about a group of rascals, and frontier justice. Hunt Emerson gives it just the right comedic touch. To Kill a Man - This one has almost a Sherlock Holmes feel to it, dealing with a thief and a woman who has to learn if she has what it takes to kill a man. Nice moody adaptation by Rod Lott. Just Meat - The hard reality of what it means to be human, as a pair of thieves divvy up their loot. Onsmith Jeremy takes a cartoony approach that suits the tone. The Wit of Poportuk - Now this feels like Jack London. A beautiful Indian maiden is desired by a poor man, whom she loves, and a rich man, whom she hates. Her will proves to be stronger than both of them, but there is a power that even she must bow to. Arnold Arre gives the yarn exactly the edge it needs. The Handsome Cabin Boy - After the last hard-edge tale, this one is another comical piece, adapted from an old folk song about a cabin boy who is a girl who is a boy who is a...a good laugh at the end, with some good Victorian-style illustrations by Anne Timmons That Spot - A dog story! Another funny piece about the toughest and laziest dog of the Yukon. Nick Miller draws a clever adaptation. War - A text-and-pictures adaptation. Hard-edged and sorrowful, with lovely pictures by Peter Kuper. The Francis Spaight - A true tale of the high seas, and what men are capable of when the chips are truly down. John W. Pierard gives it a taste of salty hell. How I Became a Socialist - A personal essay on how Jack London became a socialist against his very will. Another text-and-pictures adaptation, with art by Spain Rodriguez Moon Face - A dark and funny story about a man who is so happy that people want to kill him, because the
Trustpilot
Copyright © 2022 Thriftbooks.com Terms of Use | Privacy Policy | Do Not Sell My Personal Information | Accessibility Statement
ThriftBooks® and the ThriftBooks® logo are registered trademarks of Thrift Books Global, LLC