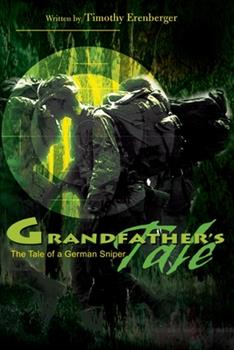 Grandfather's Tale: The Tale of a German Sniper

Every grandfather has a tale and this is the tale of Georg Frick, a German sniper for the German Army during World War II. Georg Frick is an old man now, but in 1937 the German Army drafted him.... This description may be from another edition of this product.

The Dirty Side of War

Published by Thriftbooks.com User , 16 years ago
Think of a John Wayne war movie. This is about as far away from Grandfather's Tale as you could possibly get. This book is all about the dirty little tricks of warfare. It's about snipers, and every dirty trick that they used in World War Two. In one battle, Georg and his fellow snipers are shooting enemy heavy machinegun operators. In the next, they're killing the infantry protecting enemy tanks (enabling their fellow soldiers to overwhelm the armored vehicles with ease). In brutal battle after battle, the realizm and intensity surprised me. I literally could not put the thing down until I had read every page. There's really nothing quite like it. I play online WW2 games, including Call of Duty. Let me tell you, the tricks used in this book actually work. Things like the use of cover, keeping your sigts trained upon heavy weapons (waiting for the next poor sucker to try to use the MG) really work with great effectiveness. I'm not sure if the author played paintball or what he did, but he definitely did his homework when it comes to the finer details of small armed-combat. The main character, Georg, starts out as a civillian baker, who is conscripted into the Wehrmacht just before the invasion of Poland. Gradually, in battle after battle, Georg learns more and more tricks of his trade. By the end of the book, he's a super-soldier who makes Chuck Norris and Rambo look like a couple of Boy Scouts. These skills are put to the ultimate test when he is placed in the Battle of Berlin. I think something like 75,000 Germans were defending Berlin from about 1-million Russian soldiers. They managed to kill about 250,000 of them in a final, desperate stand of epic proportions. I had wondered for years exactly how they pulled this off but in Grandfather's Tale the battle and the many tactics used by both sides are highly detailed as the battle is played out between the two armies. I also have to say that I kind of felt sorry for this man as I read this book. He was just working away in his mother's bakery one day, minding his own business. The next thing he knows he's being conscripted into the German Army, invading other countries and fighting to survive. His only thoughts are of home as he dodges bullets, mortars, artillery, grenades, mines and deadly hot and cold weather time and time again. It's a miriacle that any of the Germans who fought all six years survived, but surely many of them did. The German's attempt to capture Moscow is yet another huge part of the book. I used to think it was the cold that stopped them, but actually it seems that the rain-soaked mud roads were a huge factor as well. The muddy conditions stopped Georg and his fellow German soldiers for two months as they sat poised to take Moscow. It's a good thing it rained so much or we'd probably all be speaking German right now. When the Winter did hit, it froze the mud like concrete. German tanks were frozen in what had been mud the night before. What made matters worse, t

An Epic Tale of War and Survival

Published by Thriftbooks.com User , 16 years ago
This book really surprised me in many ways. It begins in the modern USA with a boy going to visit his grandfather, who at first seems to be nothing more than an old man. When the boy and his grandfather go target shooting, the boy quickly recognizes that his grandpa is no ordinary marxman, as he nails one bullseye after another. One thing leads to another, and the boy finds an old box of German war medals. Rather than being upset with the boy for snooping around in the attic, the old man decides that he should finally pass on the story of what happened to him during the war, so that the memory would live on. At this point, the story goes back in time, to (I believe) 1938. The grandfather, Georg, is a young man in Germany. He is working at his mother's Bakery when he recieves a draft notification. The world suddenly changes for the baker as he joins the German Army and is trained to be a soldier. Next comes the annexation of the Sudetenland, where young Georg rolls into Czechoslovakia along with thousands of troops. Not much happens here in the way of combat, but it is an omen of things to come. A few months later, the army rolls into Poland in the first real blizkrieg of the war. Jeorg experiences combat for the first time as he picks off enemy Polish soldiers with extremely long-range shots with his scoped Kar 98K rifle. The Polish campaign surprised me, as I have always been told that the Polish were incompitent soldiers, charging the German machinegun emplacements with cavalry. In Grandfather's Tale, the Polish cavalry behaves much differently. They dismount for combat and are very well armed and trained. The Poles also have an airforce (although a very outdated one), tanks and artillery. It is more the tactics of the Germans than their technological advantage that they prevail over the Poles.\ During the Polish campaign, Jeorg is befriended by a master sniper, named Ellis. This man teaches him tricks he learned during the First World War. The two of them make an amazing sniper team as they pick off enemies from hundreds of yards away, concentrating upon soldiers using heavy weaponry. After the Polish campaign, Jeorg and Ellis join the Fallshirmjager, which is the equivilent to the US Airborne. As paratroopers, they participate in the taking of Eben Emael, the greatest single fortress in the world, which is located in Belgium. Here, a mere force of 85 paratroopers overcomes a garrison of 1500 men. This enables the remainder of the German Army to take Belgium and France. Next the story moves on to the invasion of Crete, a small island south of Greece. Here, the English Army is waiting for Georg and his fellow paratroopers with a deadly trap, for they have already cracked the German Enigma codes. Though the enemy is waiting for them and thousands of their fellow paratroopers are killed, the Germans manage to take a small pocket on the island, enabling reinforcements to land on a newly captured, crater-filled airstrip. Just when you think Ge

Published by Thriftbooks.com User , 16 years ago
I must admit, I'm not one who normally finishes books. I start them, become bored, and never finish them. I finished this one in one weekend. I was riveted. Before I read this book, I never knew how hard the Polish Army fought against the Germans. I never knew that they had modern technology, such as tanks and planes. Every history book I had looked at only mentioned the Polish cavalry being slaughtered by German machineguns. This creates a completely wrong picture of how the Polish Army functioned. Their cavalry were elite soldiers, who merely travelled upon horseback and dismounted to fight. All of this is detailed in Chapter 5. This is but one aspect of Grandfather's Tale. There are simular in-depth details about the British, Russian and American armies as the main character describes fighting them in bullet-by-bullet detailed accounts of battle after battle. It is a story both entertaining and educational, and one of my favorites.

Published by Thriftbooks.com User , 19 years ago
If you want to see what the war was like for a front line soldier on the German side, read this book. It begins in the near future, when the main character is an old man. He hasn't ever told anyone what happened to him during the war. When his grandson finds a box of German medals in an old cigar box up in the attic, he decides to tell him the story. From here, the book goes to 1937. Jeorg, the main character is conscripted into the German army. Details of training, swearing allegience to Hitler, the equipment he is issued, etc. are given in great detail. After that the story goes to the invasions of Poland, Western Europe, Crete, and the Soviet Union. When Germany goes on the defensive, the main character fights in Italy, France, and finally (a very climactic) the battle of Berlin.

Published by Thriftbooks.com User , 20 years ago
I have to admit that I have a very short attention span when it comes to books in general. Erenberger's writing is fast paced and easy to digest. In fact, it's very hard to stop reading the book. My wife kept hollering for me to "put the book down" after I read it for three or four hours nonstop. The descriptions of the many battles are so vivid and well done that they make you think of the many sounds, smells, and dangers which surrounded the soldiers as they fought. The closest thing It's like a mixture of Saving Private Ryan and War of the Rats. (Although where I found War of the Rats rather boring and lacking action in compairison to GT) It also covers a lot of battles which seem to have been "forgotten" in our history books, because they did not involve American soldiers.
Copyright © 2022 Thriftbooks.com Terms of Use | Privacy Policy | Do Not Sell My Personal Information | Accessibility Statement
ThriftBooks® and the ThriftBooks® logo are registered trademarks of Thrift Books Global, LLC