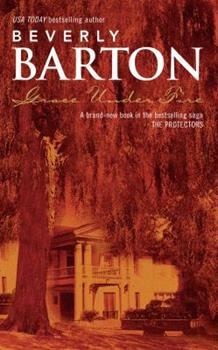 (Book #20 in the The Protectors Series)

In this brand-new book in Barton's bestselling Protectors saga, hot-blooded bodyguard Jed Tyree is hired to protect Southern social beauty Grace Beamont, who is determined to uncover the truth about an accident that tore apart her life. Original.

Published by Thriftbooks.com User , 19 years ago
Grace Beaumont was living in an emotionless void for four years after the deaths of not only her father and her husband, but her unborn child as well. When she gets a letter stating that the accident was no accident, Grace feels she has no choice but to pursue justice for the people that she loved and lost. She turns to the Dundee Agency, and the bodyguard they send, Jed Tyree. Suddenly she her feelings are not only back, but intensified as she and Jed get closer and closer. Soon she realizes that while she may not have cared if she lived or died, she doesn't want to lose out on a second chance to love.Jed Tyree has a bigger agenda than only protecting Grace. The more he falls for her, the more he realizes what a big mistake keeping the full truth from her was. He's not who she thinks he is. While she is on the top rung on the social ladder, he isn't even on the ladder. He soon realizes that there is no way they have a future together.As the danger comes to a boil, both realizes that they won't give the other up. With her flair for romance and suspense combined, Barton doesn't dissapoint the reader in the new 'Protector' book.

Published by Thriftbooks.com User , 19 years ago
Three years ago, a car accident killed Gracie Beaumont's father, husband and unborn child and for all effective purposes Grace is only going through the motions of living. The father of a rich man and the wife of a powerful person, Grace took over the reigns of Sheffield Media Inc. as the new CEO. The job occupied her mind so much that she didn't have to think about all her losses.One day at work Grace receives a letter that states that the deaths were not an accident but a murder for hire ordered by Booth Fortier, the top leader of the southern Mafia. Her husband and father were going to expose his dirty dealing with the governor and that's why they had to be eliminated. Grace hires a PI firm to investigate the charges and Jed Tyree serves as her bodyguard since the case is bigger than she knows. Jed and Grace quickly become a couple but he is afraid she will reject him when she learns that he is the nephew of Booth Fortier.Beverly Barton writes a thriving work of romantic suspense that has readers totally absorbed in the story. The sexual tension between the hero and the heroine is so powerful that readers can empathize with their feelings of insecurity. The villain comes across as a real person, which makes him viler than many antagonists found in crime thrillers. GRACE UNDER FIRE is a special book filled with lots of suspense and action.Harriet Klausner
Trustpilot
Copyright © 2022 Thriftbooks.com Terms of Use | Privacy Policy | Do Not Sell or Share My Personal Information | Accessibility Statement
ThriftBooks® and the ThriftBooks® logo are registered trademarks of Thrift Books Global, LLC