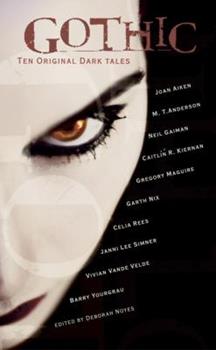 "Get ready to sleep with the lights on " -- GIRLS' LIFE A lovesick count and the ghost of his brutalized servant . . . a serial killer who defies death . . . a house with a violent mind of its own and another that holds a grotesque secret within its peeling walls. Here are witches who feast on faces, changeling rites of passage, a venerable vampire contemplating his end, and a fanged brat who drains the patience of a bumbling teenage boy. Here too...

Tangles you in its wicked vines...

Published by Thriftbooks.com User , 15 years ago
"Lungewater" is a classic gothic tale that evokes ghosts of the past to establish a terrifying atmosphere in the present. The ambiance created in "Morgan Roehmar's Boys" is so well described that it pulls you right inside the barn (even if you've never been inside one in real life). A story that misleads you while sending shivers up your spine. My favorite story is "Watch and Wake", for from the moment that Jim arrives in town a feeling that something is not right invades your every fiber; a feeling that doesn't abandon you even after the dreadful twist in the end. Despite its extremely long title "Forbidden Brides of the Faceless Slaves in the Nameless House of the Night of Dread Desire" is excellent! In an exceptionally ironic manner it explains why anyone would read or write stories like the ones in this book... "The Dead and the Moonstruck" is a marvel! With its dream sequences and mysterious, yet fascinating world, it does what a good story should: leaves you wanting for more. The title alone is enough to crack you up: "Have no Fear, Crumpot is Here!" is a bizarre story that deals with bratty vampires, a peculiar hero and responsibility; it combines horror and humor in an extraordinary way. "Stone Tower" wraps you instantly in the lines of its astonishing plot. The more you read the more questions and doubts will arise. A bold story that, as you begin to read, you really don't know what to expect. "The Prank" is bizarre; however, it holds a sense of irony, wit and emotion. While reading "Writing on the Wall" I couldn't help to think "Amytiville Horror" and even though it is about a haunted house, it is nothing alike. This story brings up horrifying images and a fantasmagorific sense of insecurity. "Endings" is rather poetic and very short story that leaves you with a sense of honor and closure. If you enjoy shivers, creepy plots, horror in general and have an open imagination, this book is for you.

Published by Thriftbooks.com User , 16 years ago
I started reading this book on a train. When the train came to a stop I was right in the middle of one of the stories and ran through the dark parking lot to my car and sat there, freezing my tush off, to finish the tale (Vivian Vande Velde's!). Then I sped home, looking over my shoulder the entire time for fear there was someone in the back seat of my car breathing down my neck. I got home - sped inside - turned on all the lights and dove under a blanket on my couch to finish reading the whole book. It's that good! Gothic! is a collection of fun, scary, sometimes hysterical and sometimes melancholy tales that puts you in the perfect mood for a dark and stormy night. Once you start reading one, you'll have to read them all...and be sure to read the intro by Deborah Noyes - it perfectly sets the tone for the entire collection. Don't miss it!

Frighteningly fun for fans of horror movies and horror tales

Published by Thriftbooks.com User , 17 years ago
What exactly is the difference between a gothic tale and a horror story? In Deborah Noyes's introduction to GOTHIC!: Ten Original Dark Tales, she explains: "It's probably more accurate to think of gothic as a room within the larger house of horror. Its decor is distinctive. It insists on burden of the past. It also gleefully turns our ideas of good and evil on end." GOTHIC! contains more than a collection of the classic gothic tale, however. Although some stories maintain the classic gothic story, we also find more contemporary tales that are both dark and sometimes even humorous. The cast of authors includes: Joan Aiken, Vivian Vande Velde, M.T. Anderson, Neil Gaiman, Caitlin R. Kiernan, Barry Yourgrau, Janni Lee Simmer, Gregory Maguire, Celia Rees, and Garth Nix. There are several stories that stand out in this dark collection. Among them are Neil Gaiman's "Forbidden Brides of the Faceless Slaves in the Nameless House of the Night of Dread Desire." Gaiman is well known for his eerie graphic novels, and most recently the children's book CORALINE. As a fan of the gothic structure, Gaiman tips his hat to the traditional tale and leaves the reader questioning. Also of note is Barry Yourgrau's "Have No Fear, Crumpot is Here!" which masterfully mixes humor and horror. The main character of the tale is a troublesome teen named Walter, who is to spend one week during the summer with his parents' friends. His parents, who are away on a business conference, want Walter to learn to "demonstrate responsibility." Walter is in an angsty world of his own where he has invented a ruthless alter ego named Crumpot. But not even Crumpot is prepared for what is in store! Gregory Maguire's "The Prank" is another story that stands out from the pack. Maguire is widely known for his new renderings of the traditional fairy tales as he shows in his popular books WICKED and MIRROR MIRROR. Similar to Yourgrau's Walter character, Maguire introduces us to an equally angsty teen, Melanie, who has been sent away to live with her great aunt. Melanie has been in trouble at home and her smart alecky attitude is not getting her far with her great aunt. But even Melanie is shocked when she finds out the secret that is hiding in the attic... GOTHIC!: Ten Original Dark Tales is a frightfully fun read for fans of horror movies and horror tales. --- Reviewed by Kristi Olson (zooey24@yahoo.com)

Published by Thriftbooks.com User , 17 years ago
Truly enjoyed these shockingly repellent yet oddly inspiring tales. Quick question for anyone in the know. Is the editor of these stories related to Alfred Noyes, author of The Highwayman?

Published by Thriftbooks.com User , 17 years ago
Goosebumps are for kids, Gothic is for those who welcome the night with both open arms and opened imaginations. Come my children, what are you afraid of?
Copyright © 2020 Thriftbooks.com Terms of Use | Privacy Policy | Do Not Sell My Personal Information | Accessibility Statement
ThriftBooks® and the ThriftBooks® logo are registered trademarks of Thrift Books Global, LLC