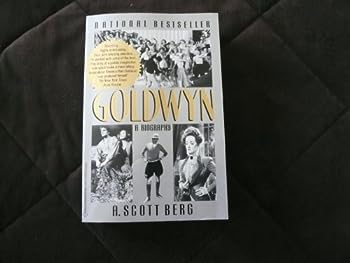 This description may be from another edition of this product. Samuel Goldwyn was the premier dream-maker of his era, and in this lavishly-praised biography, the Pulitzer Prize and National Book Award-winning author of Lindbergh and Max Perkins: Editor of Genius...

Another Great Work by Berg

Published by Thriftbooks.com User , 13 years ago
A. Scott Berg does an excellent job in capturing the life of one of the American cinema's first industry moguls. From his tough beginning as an immigrant to his phenomenal success as an independent producer, this entertaining and fascinating biography delves deeply into the man with the "Goldwyn touch." Berg also effectively captures the spirit of early cinema and its rapid rise in American culture. Along the way, we also learn about many of Hollywood's colorful personalites, including Charlie Chaplin and Mary Pickford. This book is a must for any fan of early American motion pictures.

Published by Thriftbooks.com User , 15 years ago
I picked this book up at the library not knowing what to expect and was amazed! Although it is indeed a biography of Sam Goldwyn, it is also a very well told piece about the studio system and Hollywood in the first half of the century (with an emphasis on the 20's) Not only insightful but entertaining; it makes for a read more gossipy than the trashiest celeb autobiography while maintaining class and style. I recommend this book to anyone the least bit interested in the classic hollywood days. It is the best book I've read thus far on the era, and it will get you down to the video store hunting down old movies just to see the actors and actresses you've read about.

Published by Thriftbooks.com User , 19 years ago
What a story! A remarkably easy to read account of Sam Goldwyn's rags-to-riches life. Did you know "Goldwyn" was not his real name? Did you know he was thrown out of the MGM company after a few years?! Goldwyn worked at some stage or other with just about every famous name in the business, and also fell out with just about everybody he ever met. A cantankerous and perverse character who loved contradicting people. When people quit because he made their lives intolerable, he sometimes felt personally attacked and betrayed. The book is full of colourful characters, and Scott Berg has done a wonderful job of using quotations and dialogues to really bring these people alive: Gary Cooper, Marlon Brando, Charlie Chaplin, Mary Pickford, Lillian Hellman, William Wyler, Billy Wilder, and the remarkable Hilda Berl. It reads like a movie! By tracing Goldwyn's history, the book also covers the story of many of the other famous movie companies that are still famous today: United Artists, Universal, Paramount, Warner Brothers, RKO and of course MGM. Goldwyn also came across many young actors and actresses before they were stars: Vivien Leigh, Laurence Olivier, David Niven, Marlon Brando, John Wayne, etc. And of course the famous Goldwyn malapropisms are here, though limited to the ones actually traceable (as far as possible) to Goldwyn himself: "Anyone who sees a psychiatrist should have their head examined! Include me out! A verbal agreement isn't worth the paper it's written on," to pick just a few.A remarkably well-written and well-researched biography that brings this vigorous, infuriating, yet oddly attractive ugly duckling to vibrant life. This must rank amongst the best biographies, up there with Ron Chernow's book about the Morgans. Anyone at all interested in movies and movie history will enjoy this.

Great bio of a genius's life

Published by Thriftbooks.com User , 21 years ago
Great book! I enjoyed reading about a man who literally came from poverty to be on of Hollywood's pioneer filmmakers. He was a rough man to work with no doubt, but knew what worked and lasted in an industry that is hard to last in! A. Scott Berg did a wonderful job of writing a respectful book about this man!

Exceptional Hollywood Bio - the best of the bunch

Published by Thriftbooks.com User , 22 years ago
A most compelling, intricate, mesmerizing, passionate, heartfelt and respectful account of Goldwyn's life! A. Scott Berg has created a profound work as equal an opus to any of Goldwyn's best stuff. The neat thing is that you feel as if you were there - the birth, growing pains and maturity of Hollywood - brutally recreated for our pleasure. Bravo!!
Copyright © 2020 Thriftbooks.com Terms of Use | Privacy Policy | Do Not Sell My Personal Information | Accessibility Statement
ThriftBooks® and the ThriftBooks® logo are registered trademarks of Thrift Books Global, LLC