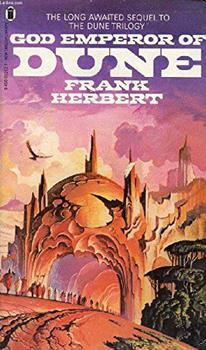 Book Four in the Magnificent Dune Chronicles--the Bestselling Science Fiction Adventure of All Time Millennia have passed on Arrakis, and the once-desert planet is green with life. Leto Atreides, the... This description may be from another edition of this product.

The Joys and Pains of Leto II

Published by Thriftbooks.com User , 18 years ago
I personally think Herbert could have ended his series here, as he manages to accomplish, with Leto Atreides II, all of the things he didn't manage with Paul. I'm going to reveal a ton of plot here, so bear with me. [Reading a review about what happens and reading the book are two different experiences, anyway, so you won't lose anything by reading what I type here.]At the end of Children of Dune, Paul's son Leto II had merged with the "sandtrout" (larval form of the Dune sandworms) to become a super-human monster who was very close to invincible. It is speculated at the end of that book that he could live for 4,000 years. As God Emperor of Dune opens, it is 3,508 years after the events of Children, and Leto's sandtrout have transformed him into a human-sandworm hybrid, the only such animal in existence. Arrakis is now totally terraformed, and Leto has a tyrant's grip on the empire's dwindling supplies of the spice, melange.Leto is a more powerful telepath than his father, and has the memories of all his ancestors--male and female--upon which to draw. He has become sensitive to moisture, and mostly lives in a citadel near the desert portion of Arrakis. Around him, the Bene Gesserit, the technologists of Ix, and the genetic manipulators of Bene Tleilax continue to weave their schemes in an effort to find his "secret stash" of spice.The God Emperor has transformed society on an unprecedented level. Every world reflects the same pattern of life, and has been frozen by a ban on space travel. Only Leto's "Fish Speakers," an army composed entirely of women, are allowed free travel, and they perform the roles of conquerers and "civilizers." The clever part of forcing humanity into this pattern (which I didn't catch until I had read the book later) is that all of humanity gets to experience what age after age of peace is like. That was a big part of Herbert's story, after all: to show what life would be like for a person dependent upon prescience. And the verdict of that life is boredom.Thrown into this mixture, of course, is a rebel Atreides, Siona, and the continually-reborn Duncan Idaho. They are considered crucial to Leto's breeding program for humanity. There is also a new, female ambassador from Ix, who allows Leto to recall his human side. All in all, there's a lot happening here, but Herbert manages to tell his story briskly. The usual quotes at the beginning of each chapter are usually excerpts from Leto's Journal, and provide (as usual) interesting comments about society and politics. I really enjoyed this book. To get a better, simpler look at Frank Herbert's universe, this serves as a triumphant example.

The future of mankind hangs upon Leto's breeding program

Published by Thriftbooks.com User , 21 years ago
Leto Atreides must be the loneliest person in the world, though he is an Emperor and worshipped as a god. And why a god? Because he is unique and practically, though not really, immortal.At the end of Children of Dune, (Book 3) Leto makes a terrible choice and covers himself with sandtrout, the spawn of the mighty Shai-hulud, the sandworm. This causes a transformation and we meet him, mostly Worm, all too human, in the fourth book.The characters are very well drawn, as you'd expect from Herbert. In particular, Duncan Idaho, returned as the eternal clone or ghola, has a large role. Leto, bigger than life, still retains the human tragic-hero quality, similar to that of his father Paul-Muad'Dib. He has created an army of women, the Fish Speakers, to enforce his law throughout the galaxy. There is peace, but at what price? Despite the peace, Leto has powerful enemies, and he knows it. Some are enemies he has deliberately created. Why?The end of the story has all the qualities of a legend or great tragedy, though Leto's legacy is that men can survive an uncertain future. This is a fine book and better than the second and third of the Dune series, and in fact, quite unique.

Published by Thriftbooks.com User , 22 years ago
This is what the whole series is all about right here. Paul Muad'Dib was a failed messiah. Failed because he locked himself into a future that he could not stand to be a part of. Like his father, young Leto II also saw the path that his father fled from. But in looking deeper into that future saw the only way to save humankind from itself. The Golden Path. This book is set smack-dab in the middle of that golden path. Deeply religious and philosophical undertones drive this book right to the top of my personal best list. If I had to pick only one book that truly changed my perspective and deepened my thinking it has to be this book. Leto is a very rich character unparalled in any other series. Frank Herbert took the ideal of a higher power and what it must be like to be that power, and humanized it for all to disect and study. True Genius. If you're looking for the action of the first book, God Emperor might dissapoint you. Though there is action, it is the dialogue of this book that makes it the timeless perfection that it is. So if you want to take your mind on a consciousness expanding ride, curl up with this book and enjoy.

This is what it's all about

Published by Thriftbooks.com User , 22 years ago
After I read the first fifty pages of God Emperor Dune, a sudden sadness overtook me. I thought of all my friends that loved Dune, but got stuck in Dune Messiah. I thought of all the other ones that made it through Dune Messiah, but got stuck in Children of Dune. Can we please have a moment of silence for these unfortunate souls. While I did like books 2 and 3 of the series, I'm the first to admit that they were not of "Dune" quality. God Emperor of Dune, however, may be its rival. It is so rare in a series, especially in Book 4, that you think to yourself, all the other books have been leading to this one moment. Leto II's Golden Path indeed shines through. For non-sci-fi people, this series is more than sci-fi. It's an examination of political philosopy, economy, and religion. One could almost call it allegory. Herbert's characters: Maud'dib, Leto II, even Moneo (in God Emperor) are so well developed as to become Messiah's, God's, and friends in their own right. The Dune books force you to think, they entertain, and they sweep the imagination to a world millenia away from now. God Emperor of Dune itself take place 3 thousand years after Children of Dune. If you are thinking of quitting the series, I counsel you to wait until after you have read this amazing fourth book. My idea: there's now way anyone could stop now.

God Emperor of Dune Mentions in Our Blog 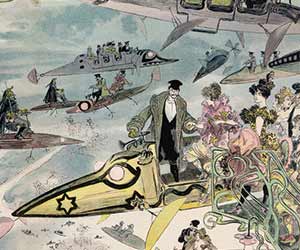 The genre of science fiction writing has two great pillars representing the wonder and promise of future worlds, and the intricate technology as yet unimagined, except by their questing minds. Frank Herbert and Robert Heinlein were contemporaries who saw sci-fi through these different lenses.