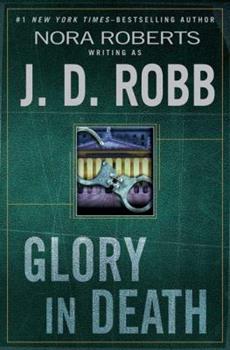 From Nora Roberts writing as J. D. Robb comes the second novel in the number-one New York Times-bestselling series starring New York Lieutenant Eve Dallas-now in a special hardcover edition. It is 2058, New York City. In a world where technology can reveal the darkest of secrets, there's only one place to hide a crime of passion-in the heart. Even in the mid-twenty-first century, during a time when genetic testing usually weeds out any violent hereditary...

Published by Diana Secrist , 3 years ago
I just finished reading it. I couldn't put it down.

Published by Thriftbooks.com User , 17 years ago
"Glory In Death" is the second book in J.D. Robb's futuristic mystery series. Set in New York City, 2058 CE, robotic drones and voice activated machines do menial work; there is a total ban on guns, (the police use lasers); major advances have been made in medicine, technology, and genetics; airbuses are the preferred vehicle for public transportation; tele-links replace telephones; and people travel to other planets, (Venus, Mars), for vacation and business. It's not quite a brave new world, but there are significant changes midway into the 21st century. The overpopulated world has more limited resources - real coffee is rare and way too expensive, as is beef and other fresh meat. Robb has not written a sci-fi series, however. Far enough into the future to make the storyline more interesting, today's world is still easily recognizable. Lieutenant Eve Dallas of the NYPSD is a tough cop who made Lieutenant before the age of 30. She, is also very vulnerable emotionally. Eve doesn't remember the early years of her life, but knows that she was sexually, physically and emotionally abused by her father, abandoned at age eight and left to the mercies of Children's Services. She met handsome businessman Roarke in book one, and the couple has become seriously involved. Roarke is a charismatic Irish billionaire, who wields considerable power worldwide, and has fallen hard for the first time in his life - for Eve. Prosecuting Attorney Cicely Towers, a powerful, talented professional, is found dead, throat slashed, in a sleazy part of town. Eve is called in as primary to work the case. Then a second victim turns up. A beautiful, up-and-coming TV actress is found murdered, throat cut, on the rear patio of her apartment building. Eve is again called in -same MO, most probably the same killer. Unfortunately, both victims were involved with Roarke in the past. Obviously this development causes friction in their growing relationship - a relationship which is also stressed by Eve's discomfort with Roark's world of wealth, power and the "beautiful people." Then there's the additional pressure of knowing that another murder will probably take place unless the case is solved ASAP. Again, J.D. Robb has come up with a winner. "Glory in Death" is a fast paced police thriller with top notch characters and an excellent plot. Although the murder mystery is primary, Roarks's and Eve's developing romance does add a lot and allows for a better insight into the complex characters of the two. The author's knowledge of police procedurals make the storyline more believable. The only problem I had with the book is that Roarke was a murder suspect in the first novel, "Naked In Death" also. This just seems too contrived to me. He is a man with an amazing number of business and personal connections. He knows half the world. It is a bit much to have a stable and respected figure like him suspected twice in a row. Overall, I recommend the mystery and intend to read more of

Published by Thriftbooks.com User , 20 years ago
In this book, someone's slashing the throats of prominent and successful women. Since the suspects include family friends of Lieutenant Eve Dallas' commander and Eve's lover, Roarke, this becomes a very difficult case for her.If you haven't read the first book, Naked in Death, I would suggest that you do that first, although this early in the series it's not as important. Just as a warning for those who have never read one of the In Death books, the mystery is not really the most important part in the book. I've heard regular mystery readers complain that they were able to figure out who committed the murders long before anyone in the books did. That wasn't the case for me - I enjoyed the mystery element in this book - but the relationships are the reason why I keep reading the series and why I reread all the books. In this book, Eve has to deal with her problems with commitment in her relationship with Roarke. The way Eve and Roarke interact is wonderful, and Eve's gradual attempts at making herself more than just a cop are interesting reading. I definitely recommend this book and series to anyone who likes well done and well paced romance with mystery and murder mixed in.

Second book to a great series!

Published by Thriftbooks.com User , 21 years ago
I read the first book with such enthusiasm, but this one was only better! Eve and Ruarke continue in the developing a relationship, unlikely for both being they are very strong and independent characters. You get a little bit of both their haunting pasts as you go along. This does keep it very interesting. The year is 2058 and the setting for this future is really easy to believe and she did a great job with the setting. The mystery of "who done it " is really great as I didn't figure out who it actually was in either books! I have already started the third and this is really a great series!!!

Published by Thriftbooks.com User , 22 years ago
I read every J.D. Robb (Nora Roberts) book I can find. I have enjoyed them all. This one had a great ending and kept me guessing about 'who done it' until the wrap up. I really like Eve Dallas and Roarke as a couple and Eve as a cop is perfect. I'm looking forward to the next one "Witness in Death".

2nd in the series and another great one.

Published by Thriftbooks.com User , 23 years ago
2 down and 6 to go. I've already started on #3. I haven't gotten tired of reading Eve Dallas's stories. This series is excellent. When it is a series as long as this one, I usually switch to another author. But with this one, I can't wait to get my hands on the next one. I don't have #4 yet, but I will call tomorrow about getting it. Only ONE bit of advice. Start this from #1 and work yourself to #8. You need to know the character when you read the books. And the only way to do that is to start with #1 and work your way up. VERY GOOD READING. I can't understand how anyone could have given this book a 1 star or 2 star rating. It's way TOO GOOD for that.
Trustpilot
Copyright © 2022 Thriftbooks.com Terms of Use | Privacy Policy | Do Not Sell or Share My Personal Information | Accessibility Statement
ThriftBooks® and the ThriftBooks® logo are registered trademarks of Thrift Books Global, LLC