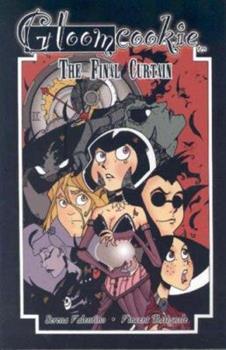 (Book #5 in the GloomCookie Series)

Wrapping up the long-running Gloom Cookie series, The Final Curtain brings us to a brief resting point for all of the characters as the goth soap opera brings everything to a boil, with plots, twists and turns in the relationships and the storylines.

Good, but could have been better

Published by Thriftbooks.com User , 14 years ago
This is a great series, but I (like the other reviewer) felt that it really lacked a great ending. For the most part, everything in this volume has an ending, although there are one or two parts that are left open (maybe for a sequel later on down the road?). The biggest flaw I would say that it had, other than the fizzle ending, would be that at times the plot seemed a little disjointed & jumped from plot point to plot point. The pairings in this volume were forshadowed, but I would have liked there to be a bit more storytelling.
Copyright © 2020 Thriftbooks.com Terms of Use | Privacy Policy | Do Not Sell My Personal Information | Accessibility Statement
ThriftBooks® and the ThriftBooks® logo are registered trademarks of Thrift Books Global, LLC