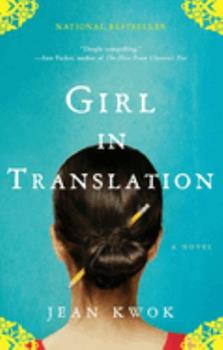 From the author of Searching for Sylvie Lee , the iconic, New York Times -bestselling debut novel that introduced an important Chinese-American voice with an inspiring story of an immigrant girl forced to choose between two worlds and two futures. When Kimberly Chang and her mother emigrate from Hong Kong to Brooklyn squalor, she quickly begins a secret double life: exceptional schoolgirl during the day, Chinatown sweatshop worker in the evenings...

Published by Patty , 11 months ago
I thoroughly enjoyed this book. It was so well-written. I didn't know there were still sweat shops in NYC in the 1980's. This book gave me a renewed appreciation for the struggle immigrants have.

Published by Rosamond , 2 years ago
Girl In Translation is a well written book that tells such an interesting story. The characters are presented in a unique way; thus creating such an enjoyable book to read.

Published by Thriftbooks.com User , 11 years ago
WOW were the first words out of my mouth after finishing Girl in Translation by Jean Kwok. I had only meant to read for a bit but before I knew it I had raced through the book. From the first page to the last, Kimberly's story just grabbed me and wouldn't let go. "There's a Chinese saying that the fates are winds that blow through our lives from every angle, urging us along the paths of time. Those who are strong-willed may fight the storm and possibly chose their own road, while the weak must go where they are blown. I say I have not been so much pushed by winds as pulled forward by the force of my decisions. And all the while, I have longed for that which I could not have. At the time when it seemed that everything I'd ever wanted was finally within reach, I made a decision that changed the trajectory of the rest of my life." I have to confess something: I'm an immigrant who's not drawn to immigrant stories. Why? I think it's because it's too close to home. But something about this book just really called to me. Some of what Kwok writes about (which she says is not a memoir but drawn from her own life) reminded me a lot about my experiences (without the extreme poverty) - being an outsider in a world where you understand very little of what's going on because of language difficulties or cultural misunderstanding, prejudice, finding refuge in scholastic achievement. But Girl in Translation's realism goes far beyond this, painfully so - what Kimberly and her mother endure as very poor immigrants is heartrending: They are forced to live in a rat and cockroach infested apartment building slated for demolition. To survive, her mother, once a violin teacher, now has to work long hours in a sweatshop factory for a pittance. Kimberly, who has to help her mother after school, in violation of labor laws, already knows that this is her future. She views the price of items not by the dollar, but by how many skirts she and her mother have to finish at the factory. Every item bought is measured by the amount of backbreaking work. You don't have to be an immigrant for this story to affect you; Kwok does a magnificent job of putting you in Kimberly's shoes. For instance Kimberly speaks and understands a Chinese schoolgirl's English; she understands most words but not all. Thus, Kwok writes the dialogue the way Kimberly hears it. The reader then is forced to be in Kimberly's place, feeling the sense of disorientation and bewilderment she feels. Another thing that Kwok used effectively was the loveliness of Chinese sayings and idioms translated to English. When the Chinese characters interact, the way they talk to one another has a poetic and metaphorical wit that is very different from American idiom. One thing that didn't work for me was a momentous decision that Kimberly makes towards the end of the book; it came as too much of a surprise. The reasons for it are explained but the circumstances seem improbable. It's as if Kwok faced two outcomes, one

Published by Thriftbooks.com User , 11 years ago
This coming-of-age story absorbs the reader in the life of an exceptionally intelligent young girl who, brought by her recently widowed mother, immigrates from Hong Kong to Brooklyn with just a rudimentary command of English and no resources to speak of. Despite her young age, Kimberly Chang enjoys none of the carefree privileges of childhood. Attending an elite private school on full scholarship while working in a sweatshop and living in unmitigated squalor, Kimberly exists in two parallel worlds, and becomes a keen observer of both. The book is a fast read, and a poignant one.

A Dickensian novel about hard choices

Published by Thriftbooks.com User , 11 years ago
This novel has it all. The first part, in which we are exposed to the squalor and hardship of the new immigrant's life, reminds me most of Oliver Twist, or David Copperfield, in the best ways. The second part is a classic coming-of-age story, filled with the existential dread that comes with being a teenager, and an outsider. The third and final part, about mature love and loss, displays a rare sensitivity to the human condition -- a condition in which we make hard choices, where we can't have it all, where our best attempts will still lead to life-long regrets, and where self-affirmation does not erase the painful consequences of choice. This book is an experience you should have. Read it.

Published by Thriftbooks.com User , 11 years ago
This is perhaps one of the best autobiographical novels I have had the opportunity to read. The story literally grabs you from the first page and gives readers poignant and eye-opening glimpse into the world of sweat shop, immigrant labor and a family's struggle to survive. The last third of the novel failed to keep pace with the opening portion and the story was concluded a bit hastily (and perhaps even a bit cliche) but nonetheless, the story was crafted expertly. An "A" novel by anyone's standards.

The immigrant experience through young Chinese eyes - a story about hope, persistence, and dedicatio

Published by Thriftbooks.com User , 11 years ago
Girl in Translation is a coming of age story that intertwines what it means to be an immigrant with the values of family, a sense of duty, and hope for the future. Kimberly and her mother find themselves in New York looking for a better future than the life they'd known in Hong Kong. They are, unfortunately, at the mercy of Kimberly's aunt and uncle as they are quite indebted to them for arranging green cards and for taking care of medical bills for Kimberly's mom (who has had TB) as well as paying for their accommodations to New York. When the story starts Kimberly is a middle school age girl who speaks and reads some English but not enough to create any real level of understanding of her surroundings. Her mother speaks almost no English. They've just arrived and their mother's sister (herself with a story that I won't spoil) has arranged an apartment and a job. The apartment is a heat-less, roach and rodent infested slum tenancy, and the job working at a sweatshop making pennies for long hours. The Chinese culture is front and center here and it is interesting to understand why Kimberly and her mom would agree to these conditions. The sense of duty, of obligation, runs strong - and they have very little other options and no choices. It certainly brought me back to stories my grandparents talked about as immigrants themselves and how they arrived in America and the struggles they faced. I think many of us have lost this sense of our past, of the struggles of our ancestors and how it really was when you arrived at Ellis Island (or how it could be) As time passes they manage by making noises to frighten the various other non human tenants of their apartment and tape garbage bags to the broken window panes. Various people enter their life but they keep very much to themselves, afraid of what others would think if they knew the true situation. At first Kimberly struggles in school with her limited English skills but she soon picks things up and shows herself to be the star student she was back in Hong Kong for science and math. Meanwhile both she and her mom work in the sweatshop for the pittance they get paid. Their life is undeniably hard and there is a marked contrast between the way things are for them and what Kimberly sees in school. The scenes in the sweatshop are particularly disturbing and it is unsettling to say the least to know that this type of thing exists not only in the USA but all over the world. As high school approaches Kimberly receives a scholarship to an exclusive private school. All is not perfect though as there is such a contrast between her impoverished life and the immaculate and sprawling landscaped school grounds and beautiful buildings. It is really the first time Kimberly feels that she can escape the life she's been living and sets the stage for the choices she will make for the future. As Kimberly tries to balance the demands of a top notch private school with her work both at the school and at her aunt a

Girl in Translation Mentions in Our Blog 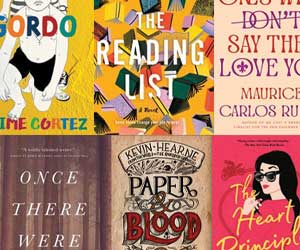 Our TBR shelves are already packed, but that doesn’t stop us from browsing (and buying!) new books! Here are 15 August releases you can preorder, along with suggestions for similar books you can pick up right now. 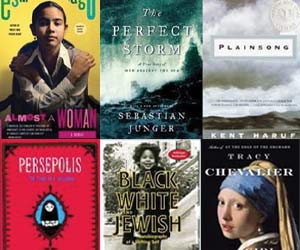