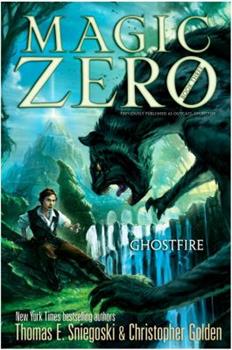 (Book #3 in the OutCast Series)

The battle lines are drawn--and only Timothy can cross them--in book three of the otherworldly Magic Zero series from two New York Times bestselling authors. Despite shunning Timothy since his arrival in Arcanum, the government has now turned to him for help. Raptus, the vicious leader of the dragon race called the Wurm, is determined to break through the magical barrier that separates his world from Sunderland and exact vengeance upon the mages...

Published by Thriftbooks.com User , 13 years ago
I actually got into this four-part series after picking up the first book in the series which my son had left laying around. I'm not sure what the reading level is supposed to be as he reads above age level and apparently had the book (and second book) for at least two years. Still he had decided to re-read the first two books and said they still were surprising good. So I read them and order the rest of the series for the both of us. The basic premise of this book reminds me of Raymond Feist's first book "Magician" (which was originally two books entitled "Magician: Apprentice" and "Magician: Master" due publisher demands of shorter books). In "Magician," the protagonist for the first part of the book is a boy with magical potential that just can't get things right, but manages to pull off some major magic in ways that can't be understood. As the series progresses, you learn that he simply had a different form of magic and had to be trained differently. In the Un-Magician series, the protagonist is a boy born into a world of magic with no magical ability. His father hides him in an alternate dimension, only to be found after his death by his finest student. The father does this out of fear of what the people of this magical world might do to him. As the series progresses, the reader discovers that young Tim is indeed regarded with a variety of responses ranging from pity, disgust, and the true thing his father had been concerned about - fear. While in hiding, Tim has become a master inventor, coming up with all sorts of devices, including a robot built as a companion, to do what he cannot do with magic. Again, this ability, which is right up there with DaVinci in scope, is viewed with a variety of responses positive and negative. As the books progress, however, Timothy discovers that he does have a form of magic that is rightfully feared - he cannot be detected by magic, affected by spells, and as time passes he is even able to 'shut off' the magic of the entire world in an emergency situation. It's the last part that I find a bit too far-fetched and somewhat taking away from Tim's inventions that were his primary aides in the throughout most of the first three books. He's an archtypical character type such as Anakin Skywalker, having great power and abilities not available to others, except he remains on the side of good though sometimes like a bull in a china shop. Throughout the series a wide range of topics that are consistently dark are addressed. Again, I can't say what age group I would recommend this to, but from watching my son, it's obvious that the finer subtle details he was somewhat oblivious to two years ago he now can see. The authors manage to put some truly heavy hitting, basic historical parallels regarding politics, wars, and human nature in such a way that is subtle enough to not distract a younger reader, but that can be seen by more mature readers. The negatives I would have about this series would be tha

Published by Thriftbooks.com User , 15 years ago
"Anticipation crackled in the air. His expectations were so high that it tingled upon his skin like magic." So begins Ghostfire, the third in the OutCast fantasy quartet by Christopher Golden and Thomas E. Sniegoski. In a world where everyone else can wield magic and weave spells, young Timothy has never had any magical powers. Instead, he's cultivated his skills in ways that are hands-on -- building robots, testing out his own inventions, creating blueprints, and more. The bad guys are back with a vengeance in this installment. Arcanum is not only propelled by magic, but by power and politics as well. When a brownout weakens everyone else's magic, Timothy must figure out who is truly on his side - and who will be the thorn in his side instead. There are twists and turns aplenty here. Fantasy enthusiasts will enjoy the mystery of just what or who is keeping the Ghostfire lit. If you and your family enjoyed the first two novels in the OutCast series, you will not be disappointed by this story.
Copyright © 2020 Thriftbooks.com Terms of Use | Privacy Policy | Do Not Sell My Personal Information | Accessibility Statement
ThriftBooks® and the ThriftBooks® logo are registered trademarks of Thrift Books Global, LLC