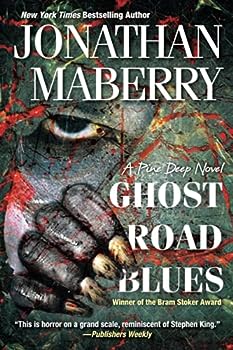 The book that launched the Pine Deep trilogy Thirty years ago, a blues musician called the Bone Man killed the devil at the crossroads, only to be beaten and hung like a scarecrow in a cornfield--or so the story goes. Today, the people of Pine Deep celebrate their town's grisly past by luring tourists to the famous haunted hayride, full of chills and scares. But this year, "The Spookiest Town in America" will learn the true meaning of fear. Its residents...

Packs a supernatural wallop with a sense of play

Published by Thriftbooks.com User , 15 years ago
Something bad is happening to the little hamlet of Pine Deep, Pennsylvania, where things that are dead are not staying dead; where a strange blight is destroying the crops; and where ghosties and ghoulies walk the streets in Jonathan Maberry's debut novel _Ghost Road Blues_. Halloween is only thirty days away, and our protagonist, Malcolm Crow, is busy with the town's annual Haunted Hayride, a carnival-type yearly event owned by Crow's childhood friend and now city mayor, Terry Wolfe. But when three bad guys blow into town amidst the resurrection of something darkly hideous that has been buried in the swamps of Dark Hollow for the past thirty years, the mayor cancels the Haunted Hayride out of concern for the citizens of Pine Deep, and instead deputizes Malcolm Crow against the haunting, creeping darkness that is apparently swallowing up this little farming community. Jonathan Maberry is a writer who's doing everything right, including writing well, with a sense of play that translates onto every page, creating sympathetic characters about whom the reader cannot help but care. Ghost Road Blues is the first installment in what is to be a trilogy. The sequel, Dead Man's Song, is slated for release in June of 2007. The series wraps up with Bad Moon Rising in June of 2008. Highly recommended.

Published by Thriftbooks.com User , 15 years ago
This is my first horror novel since high school, and I bought it thinking it was a mystery (the cover looks like a mystery novel). I was surprised to find out that the mystery is built on a supernatural story, and that the book is the first of three. Sooo...I read it anyway, and boy this guy hits a homerun out of the park on his first try. Though I would rather have had everything wrapped up in one book, I have to say that I really dug the way the plot twisted and turned.

Halloween is early this year

Published by Thriftbooks.com User , 15 years ago
Ghost Road Blues by Jonathan Maberry is a wonderful read, though it is not a book one would ideally read in the dead of night. It is extremely frightening at times. I found this at our library in Columbia (SC) and was enchanted by the cover illustration. Though my horror reading tastes seldom venture beyond Mary Higgens Clark, I thought I would give this a try, and I was extremely surprised to find that the novel has taste, sensitivity and well-rounded characters. The dialogue is on the money, and the story is the kind of complex, intricate weaving of plotlines that I find most challenging and rewarding. I will put Jonathan Maberry's on my "must have" list from now on.

A great novel of good and evil

Published by Thriftbooks.com User , 15 years ago
In Ghost Road Blues by Jonathan Maberry there is a brewing battle of good vs evil in a small American town. The story takes place at the beginning of autumn, during harvest time, with creepy cornfields, threatening storms, unlighted back roads, and things leaping out at you from all sides. This is NOT a calm, kick back with a cup of tea read. Maberry's style is fast and furious, and I would recommend that anyone reading this book come prepared for blood, violence, and a million volts of pure intensity.
Copyright © 2020 Thriftbooks.com Terms of Use | Privacy Policy | Do Not Sell My Personal Information | Accessibility Statement
ThriftBooks® and the ThriftBooks® logo are registered trademarks of Thrift Books Global, LLC