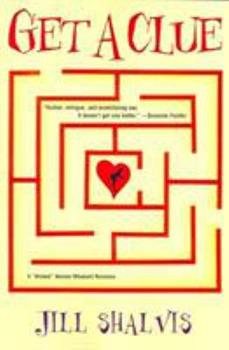 And You Think You've Had A Bad Day City girl Breanne Mooreland gets left at the altar, takes the flight from hell to her honeymoon--alone--loses her luggage, and ends up snowed in at a Sierra mountains lodge run by the kookiest staff this side of the Addams Family. Oh, and there's a gorgeous naked man taking a shower in her suite who says he isn't going anywhere. That's just the first 24 hours. . . Burned-out vice cop Cooper Scott is in serious need...

Published by Thriftbooks.com User , 15 years ago
Breanne Mooreland has been dumped at the alter and since the scum sucking groom has already paid for the honeymoon, Breanne decides to go to get away from the embarrassment the whole situation has caused. When she arrives at the mountain resort home in the middle of a blizzard, she's introduced to a naked showering guy who's already staked a claim to the honeymoon suite. Cooper Scott needed to get away for awhile and what better place than a secluded mountain? Not long after their arrival, a dead body is found. Now Bree and Cooper are in a house surrounded by 4 other people -- and one of them must be the murderer! This story had me laughing almost constantly, but in true JS form, a scene here and there would make me have that 'emotional tug' that just made me sigh. Cooper and Bree are like oil and water -- at least at first -- and watching them dance around each other was fun. I was rooting for all the couples in the house and the closer I came to the ending, the more I didn't want there to be a resolution! But -- I loved it! I'm putting it on my 'this is what I aspire to' shelf, because really, I just love the way JS writes! Shelly @ www.dramedyoflife.blogspot.com

Published by Thriftbooks.com User , 16 years ago
Breanne Mooreland's honeymoon in the Sierras isn't going anything like she had planned. In the first place, she expected to be married. She expected her husband to be on the honeymoon with her. She thought maybe her luggage would be there, too. The turbulent flight and snowstorm of the century weren't in her plans, either. And she definitely didn't expect to find a naked man in the shower of her honeymoon suite! A very annoyed naked man who is chasing her through the freezing-cold house. To make things worse, the phones and electricity go out, plunging the house into total darkness. A man who looks like a hoodlum shows up claiming to be the butler, and the rest of the staff members are equally unconventional. Breanne is not having a good day. Cooper Scott needed to get away. He quit his job as a vice cop and his brother sent him off to a luxurious mansion in the Sierras to relax, regroup and get his life back together. He certainly didn't expect a woman carrying a neon pink vibrator to show up in his bathroom while he was in the shower. And it didn't do wonders for his ego when she ran screaming through the house to get away from him. Cooper is not happy to discover there has been a booking mix-up. The manager is missing, and no one is leaving until the blizzard stops raging outside. Cooper and the woman, Breanne Mooreland, have no choice but to share the house. Then Breanne stumbles over a dead body, and things really get interesting. Cooper can't suppress the cop inside and no one is above suspicion. Certainly not any of the motley group of characters who staff the mansion. After all, the dead man used to be their boss. Breanne is spooked by the whole situation and she can't seem to keep away from Cooper. The air itself practically sizzles when they're together. The trouble is, Breanne decided to swear off men completely after her disastrous almost-wedding. So why did fate have to throw Cooper in her path now? The sexy, capable cop is thoughtful, generous, and understanding to boot. Can Breanne resist him? What happens when the trip is over and it's time to go back to real life? GET A CLUE is witty and humorous, intriguing and suspenseful, with plenty of steam and sizzle. I thoroughly enjoyed the diverse group of characters who run the mansion and the skillful way they were integrated into the story. Even in the midst of a blizzard, the setting in the Sierras is absolutely beautiful. There's plenty to enjoy but the relationship between Breanne and Cooper is what I like best. Each has an abundance of reasons to mistrust the opposite sex and I loved watching them confront their issues and deal with the undeniable attraction between them. If you're looking for a fast-paced read with just the right balance of steam, humor, suspense, intrigue and surprises, don't miss GET A CLUE!

Get A Clue sizzles

Published by Thriftbooks.com User , 16 years ago
Jill Shalvis writes a delightfully funny and sexy book in Get A Clue. Breanna Moreland has been stood up at the altar for the third time. She decides she is going on the honeymoon just to rethink her life. Boy is she in for a shock when there is a naked man in her shower. Cooper Scott needed to get away from it all. He was burned out as a cop. Cooper was told by his brother to get his act together. He thinks a get away in the mountains will do the trick. But there is a mix up with the rooms. A woman wants his room. This spitfire of a woman intrigues Cooper. Stick Cooper and Breanna together and you can watch the temperature melt the snow. Both come to this mountain getaway with problems and realize that they have found the unexpected. Get A Clue has a quirky cast of characters that run the mountain lodge. They add an additional layer of laughter and intrigue. This book had me laughing, tearing up and reaching for the fan. It's another great read from Jill Shalvis.

Published by Thriftbooks.com User , 16 years ago
Dumped at the altar"I-hate-men" Breanne Mooreland looses her luggage, gets left at the door of a seemingly empty lodge in the middle of a raging blizzard, finds a naked man in her shower and a dead body in the wine cellar. Cooper can't believe his eyes when he turns and sees a woman ogling him in the shower. Not exactly the ski-bunny he was expecting when his brother booked him the place for a much-needed get-away. Breanne irritates him in more ways than one and he's stuck with a murder investigation in an isolated lodge in the middle of a snow storm with the goofiest set of usual suspects this side of sanity. Dante is at the top of the list of any Christie-an detective worth his salt and the taciturn street-wise butler doesn't help his case with his enigmatic personality. Shelly the cook? Was her naiveté only a front for a cold-blooded killer? Lariana the housekeeper doesn't look like she scrubbed a lot of floors in her skin-tight clothes and high-heeled shoes. And finally Patrick the handyman whose language any sailor would envy. With giggle inducing wit, Shalvis lets the humor fly without sacrificing the sexual tension and romance that marks her other works. This RITA Award nominated author has done it again with characters who leap off the pages and a mystery that will not be solved until the end. "Get a Clue" sticks with you and will not allow you to put it down until it's finished. One of the best books that I've read in my over 30 years of romances, "Get a Clue" is a book that I highly recommend.

Published by Thriftbooks.com User , 16 years ago
Things were not going according to plan when Breanne Mooreland arrives at her honeymoon destination soaked to the skin, chilled to the bone, minus her luggage and her groom, seeing how she had just been left at the alter. At least she thought she was alone, until she walks in on a naked man in her honeymoon suite. Cooper Scott, who needed some time away from his job as a cop, also thought he was alone. Imagine his surprise at being ogled by a woman wielding a dayglo pink vibrator. This was the first surprise of many for the two of them. Continuing surprises include a blinding snowstorm that simply would not let up, a most unusual staff that is determined to accommodate them despite a power failure from the storm, and Cooper and Breanne fighting a losing battle against the undeniable attraction that is pulling them together. After a dead body is discovered in the wine cellar and Cooper's law enforcement training takes over, he is determined to keep Breanne safe, not knowing who can be trusted. Cooper and Breanne are absolutely adorable and the cast of secondary characters in this book is pure fun. Jill Shalvis never fails to deliver romance with a laugh, a tug at the heartstrings, and a wonderful dose of steamy romance. Add to that a touch of mystery that adds just the right touch. Get A Clue is food for the romantic soul.
Copyright © 2020 Thriftbooks.com Terms of Use | Privacy Policy | Do Not Sell My Personal Information | Accessibility Statement
ThriftBooks® and the ThriftBooks® logo are registered trademarks of Thrift Books Global, LLC