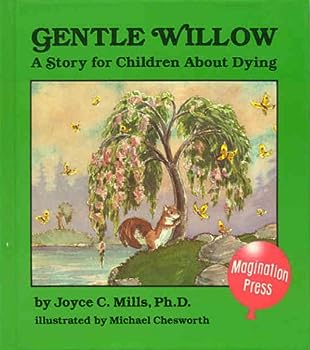 Gentle Willow: A Story for Children About Dying

This amazing book is just as helpful for adults

Published by Thriftbooks.com User , 14 years ago
I originally bought this book to read to my children, on the plane ride home to Michigan, to help them deal with the soon to be death of my father. I had read them a few books about dying and those books were about teaching them it was ok to have all their feelings. That was what I was expecting when I read this on the plane. I was hoping I was giving them some more help in dealing with their feelings, while I (although I hadn't known it at the time) wasn't even thinking about my own. What I ended up getting, though, was a story that was so beautiful and breathtakingly comforting that I was helped, along with my children. When my father died and we were waiting for the coroner, I told my mother about the book I had just read the children called Gentle Willow. I was hoping that it's metaphorical story would bring her some of the same comfort it brought me. My mom made me get it right then and she read it while we waited. My mom could not believe how the story was just like my dad's situation. When he was in his coma he was like the catapillar who was in a dark place, but with his death he would be well again and in heaven and he would now have the gift of becoming the butterfly. This thought and story brought my mom so much peace she ordered copies to give all her friends. She has since commissioned a glass artist to do a mosaic of the Gentle Willow and the yellow butterfly to be done and hung in her church. There was actually an article in the newspaper about the Mosaic and how the book, Gentle Willow, helped her during the death of my father. As far as how it helped my children, they are 18 and 19 now and they still read Gentle Willow when someone has died. The author has given an incredible gift of hope, comfort and peace to both adults and children who know someone that is sick and is going to die. You will probably still want to get another book about death and how to deal with their feelings as a companion book. Also, if the person you know died in an accident, you might want a book that deals specifically in that type of death. But, this book should not have gotten a 1 rating because it didn't help deal with the accidental death of someone. It is a book meant to help children who know someone who is dying or has died from an illness. I hope Gentle Willow comforts and helps your family the same way it did mine during a really difficult situation for everyone.

Published by Thriftbooks.com User , 14 years ago
I love this book. I bought this book for my 3 yr old to help explain death to him after my husband passed away. It was perfect because it explained about being sick and not being able to be fixed sometimes. This was similar to what we were going through with my husband who had cancer. Our son always knew his father has being sick and going to the doctor...so this helped to explain.

Helping children deal with the pain of a terminal illness

Published by Thriftbooks.com User , 20 years ago
When I first read "Gentle Willow: A Story for Children About Dying," I thought it was about preparing a child for the death of a terminally ill loved one. After all, the story tells about Amanda, a squirrel, and her friends Little Tree and Gentle Willow. One day Amanda notices that Gentle Willow looks and feels differently. Amanda becomes concerned about her friend and calls in Fixumup and Imageen the tree wizards, who check Gentle Willow and have to admit that while they can make her feel more comfortable and help her feel stronger, they cannot make her all better. The tree wizards comfort Amanda about the impending loss of her friend by explaining about the special gifts called memories.When I finished reading this book I turned to the introduction and learned "Gentle Willow" was written for children who may not survive their illness as well as for the children who know them. I have to admit, I thought this sensitive book would also help children prepare for the death of a grandparent, or someone of any age. The basic metaphor of the caterpillars turning into butterflies applies any loved one. Dr. Mills developed this book out of an earlier effort, "Little Tree: A Story for Children with Serious Medical Problems," which reflects her specialty in storytelling as a healing process of children and adults. Obviously, this book will touch adults as well as the children for whom it was intended. The watercolor illustrations by Michael Chesworth captures the shifting tones of this tale, especially through the subtle changes on the face of Amanda, as sadness is replaced by hope through the healing power of love. I wish your children will never have a need for such a book, but if the situation arises, I hope that you find this book.

"Gentle Willow" is a truly gentle story of life and death.

Published by Thriftbooks.com User , 22 years ago
A lot of childrens' books about death are either specific to one religion, or not spiritual at all. This book is a nice bridge between the two extremes. It alludes to the metamorphosis of caterpillar into butterfly, and it describes death as change of form rather than an ending. It also talks about how the living can comfort the dying and how the we cherish memories of them after death. All of this is brought up very tenderly, in the context of a squirrel whose friend, a tree, is dying. The book even touches on the emotions of anger and fear, without dwelling too much on negatives.

Tender and gentle way to help children cope with death.

Published by Thriftbooks.com User , 23 years ago
I read this book to my 9 year old daughter when we found out her cancer was terminal. It helped her and her friends deal better with her impending death. I highly recommend this book to people who are dealing with children and death.
Trustpilot
Copyright © 2022 Thriftbooks.com Terms of Use | Privacy Policy | Do Not Sell My Personal Information | Accessibility Statement
ThriftBooks® and the ThriftBooks® logo are registered trademarks of Thrift Books Global, LLC