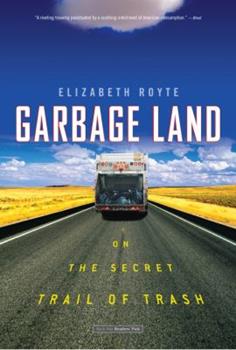 Out of sight, out of mind ... Into our trash cans go dead batteries, dirty diapers, bygone burritos, broken toys, tattered socks, eight-track cassettes, scratched CDs, banana peels.... But where do these things go next? In a country that consumes and then casts off more and more, what actually happens to the things we throw away? In Garbage Land, acclaimed science writer Elizabeth Royte leads us on the wild adventure that begins once our trash hits...

From 'The New Yorker'

Published by Thriftbooks.com User , 15 years ago
From The New Yorker Royte is a journalist with a nose for the "sordid afterlife" of trash, thoroughly at home in the putrid world of "Coney Island whitefish" (used condoms); "disco rice" (maggots); and--the darling of American consumer culture and the nemesis of waste activists--"Satan's resin" (plastic). Her book takes the form of a quest for the surprising final resting places of her yogurt cups, beer bottles, personal computer, and organic-fig-cookie packaging, and leads to an impassioned attack on overconsumption in America. If Royte does not quite demonstrate the muckraking skills of an Eric Schlosser in "Fast Food Nation," she does expose the feculent underside of our appetite for things and challenges her readers to disprove the resigned assessment of a former New York sanitation commissioner: "In the end, the garbage will win."

Published by Thriftbooks.com User , 17 years ago
Sometimes I think there is a problem with having too much knowledge, and I thought that occasionally while reading this book. It is disheartening to know that our water supply and air supply is at "safe" levels only because the politicians (paid off by the garbage & recycling industry)tailor the acceptable level of contaminants to what the industry is willing to spend to clean it. This is one of the incidental facts I learned while reading this book. Although the author primarily focuses on following her stream of garbage, recyclables, and sewage to learn what happens to them, she also informs the reader of interesting facts. Did you know that NYC used to have a herd of wild pigs roaming its streets? The pigs ate all the food leftovers that residents threw into the streets. What's good about this book (besides learning more than you ever wanted about the ickiness of garbage) is that the author presents a balanced view of garbage vs. recycling and points out that recycling (which she calls a moral act) also has its many negative environmental effects. The best solution is (and I agree with her) is to watch consumption--if you don't need it, don't buy it. Don't buy products with a lot of unnecessary packaging. Also, the industry which produces the bottles and plastic, etc. should help by creating products that can be reused or recycled more easily. The author writes about her subject with humor and intelligence. The book is a good read and makes you look at the contents of your garbage can in a whole different way.

Published by Thriftbooks.com User , 17 years ago
Garbage Land is an entry into that recent non-fiction genre that has brought us books and documentaries like Fast Food Nation and Supersize Me. Each address the inherent flaw of capitalism-- that its tenets are not physicanny or environmentally sustainable-- by looking at universally familiar subjects. While it's possible to avoid imbibing fast food, our culture, and our bodies, makes it virtually impossible not to produce waste. Elizabeth Royte makes the brave move to use her own actions as a catalyst to explore trash as the profit driven phenomenon that it is. Her findings are disturbing-- as far away as we may ship our garbage, it comes back to haunt us in so many ways-- yet the picaresqe, investigative narrative of the long, winding, sometimes heavily secured road to the dump is surprisingly rich and even inspiring. While she makes clear that the problem of trash is bigger than us all (it's in the culturally encouraged habit of consumption), and that we all participate in degrees of detritus denial, Royte manages to affirm the idea that change can begin with one less java jacket in the waste bin.

Published by Thriftbooks.com User , 17 years ago
It takes a dedicated person (or a nut!) to spend time with garbage as your companion, but Elizabeth Royte has done just that, and she did so over a period of many months. Her new book, "Garbage Land", is remarkably comprehensive, thoroughly engaging and downright fun. How many people know the names of their garbagemen? The author certainly does as she relates a time where she did a stint or two picking up garbage with the local "San Men" around her neighborhood in New York. (yes, there are women in the "pick-up" business, too) Ms. Royte duly notes the "rejectamenta" that leaves her home as she includes chapters from recycling, waste sites and sewage treatment plants, to landfills, incinerators and composting. All you've ever wanted to know about garbage and the six degrees of separation thereof, (and many things you've never cared to know) are contained in this gem of a book. To say that she has done her homework may be a bit of an understatement. Sifting through her own household garbage week after week must earn extra points as I know of no one who would ever want to undertake something like that. While the subject is indeed a fascinating one for her and for those of us who care to read about it, Ms. Royte is surprisingly (and refreshingly) not overly judgmental. Is recycling good, for instance? Well, yes and no, she offers. She introduces differing points of view and largely lets the reader decide. I must be honest and say that there are parts of "Garbage Land" that get heavily bogged down in technical terms and statistics, (which is why it took me a period of several days to get to the end) but the final "product" is as informative a look as one will most likely get these days. The author is good at giving some astounding facts. Referring to anthropology students digging through dry landfills she says, "forty-year-old hot dogs look just like the ones currently sold in the Times Square subway station. Seventy-year-old newspapers can still be read. Cling Wrap still clings". I laughed out loud when she mentioned that "as late as 1892, a hundred thousand pigs roamed New York City's streets, feasting on scraps tossed out doors and windows by the working poor"..... Times may have changed but garbage is still garbage. Elizabeth Royte has written a terrific book but she has also done a great service in enlightening us in an area of our lives about which most of us would rather not know. It is an eye-opener as well as a nose-opener. I highly recommend it.

Waste Not, Want Not

Published by Thriftbooks.com User , 17 years ago
Elizabeth Royte's Garbage Land is one woman's journey to find out where her waste goes. She follows her putrescibles to the landfills, her recyclables to recovery facilities, and even tracks her poop all the way to the sewage treatment plant and beyond. She discovers that there are no easy answers and that consuming less is the best answer to the waste problem. The reason that I resonate so strongly with Garbage Land is that since the late `80s my wife and I have been on a quest to reduce, reuse, and recycle to the max [although I participated in the recycling program in Forest Hills, Pennsylvania when I was a teen in the `70s] and have run into many of the problems encountered by Royte. Even though Whittier, California now uses the 3 barrel system [yard waste, recyclables, and trash, with the trash barrel being much smaller than the other two], we still find the level of our trash disconcerting AND we live over the hill from the Puente Hills landfill, now the largest sanitary landfill in the world [enlarging the landfill has been mitigated by setting aside or buying land for parks in the hills, so it hasn't been a total waste]. I agree with the previous reviewer's comparison to Fast Food Nation - the books share a similar feel, although I find this one even lower key in the polemics department. I finished the book over the weekend while I was at a wedding in Mendocino County. The couple was married at the oldest organic winery in the country and their house is equipped with a composting toilet - I ended up feeling like a piker when it came to the 3 R's of waste. Garbage Land is food for thought for anybody thinking about their own impact on the planet.
Trustpilot
Copyright © 2022 Thriftbooks.com Terms of Use | Privacy Policy | Do Not Sell or Share My Personal Information | Accessibility Statement
ThriftBooks® and the ThriftBooks® logo are registered trademarks of Thrift Books Global, LLC