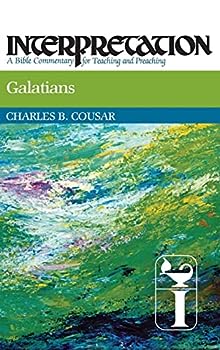 (Part of the Interpretation: A Bible Commentary for Teaching and Preaching Series)

by Charles B. Cousar

In this book, Charles Cousar offers a fascinating commentary on the book of Galatians. Interpretation: A Bible Commentary for Teaching and Preaching is a distinctive resource for those who interpret... This description may be from another edition of this product.

So you Want to Preach on Galatians

Published by Thriftbooks.com User , 16 years ago
This was one of the early commentaries in the Interpretation Series. It was intended for the busy pastor who wants to preach "faithfully" from Paul's letter to the Galatians. It happily succeeded in its intent; this book has become a staple on my shelf and his been underlined in, re-underlined in, and highlighted in, numerous times. To understand the Apostle Paul is no easy task, just look at the number of books from New Testament scholars on Paul's thought purporting to have some insight (which no one else has). With this book from Cousar, however, pastors just might be that much closer to really knowing Paul! We who mount the steps of the pulpit week in and week out hoping to have a faithful Word from God are in his debt for this beautifully written and sensitive reading of Paul's letter to the churches in Galatia. Get it if you can, read it again and again and again, and hold on to it!!
Trustpilot
Copyright © 2022 Thriftbooks.com Terms of Use | Privacy Policy | Do Not Sell My Personal Information | Cookie Preferences | Accessibility Statement
ThriftBooks® and the ThriftBooks® logo are registered trademarks of Thrift Books Global, LLC