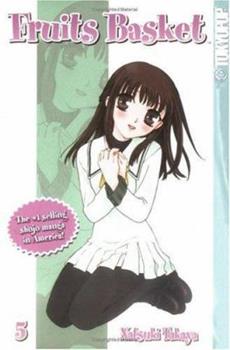 (Book #5 in the Fruits Basket Series)

We receive 50 copies every 6 months.

This description may be from another edition of this product. Tohru Honda is an orphaned teenager who comes to live with the Sohma family in exchange for housekeeping duties, but she soon comes to know the family secret

Published by Thriftbooks.com User , 14 years ago
I own this series in Japanese, and it is a wonderful read! It has all the important elements of a good shoujo manga: it is romantic, twisted, with a shoujo (in the traditional meaning of the word) involved in finding a new family and love triangles galore. It is just a very fun read, no matter the language!

Published by Thriftbooks.com User , 15 years ago
I though this book was very good in this one it starts out with them at the summmer home place that Shigure brings Toharu, Yuki,and Kyo and since no of them can drive Hatori drives them there. When they get back they later find another member of the Zodiac, this time it's Kisa the one cursed by the tiger. Trough out the book there was a lot of funny parts...but I was reading this in school so every time I can to a funny part I had to restrain my self from giggling in the middle of class(do you know how weird that would seem...). But I thought it was an Awsome book I rate it 2 thumbs up err... I mean 5 stars ^.^' .

Published by Thriftbooks.com User , 16 years ago
Shigure decides to go to the Sohma family lake house for a much needed vacation, and to torment his editor. He invites Tohru, Yuki, and Kyo.. And persuades Hatari to come along as well (because he's the only one with a drivers liscence. This episode deals largely with Yuki and Kyo's changing relationship, and how Tohru deals with. At the Lake house Ayami Sohma shows up out of the blue. The rift between him and his younger brother, Yuki, is tested once again. He also reveals to Hatari that his former fiancee, Kana, has gotten married. While out on a walk together Yuki and Tohru encounter Hatsuharu Soma carrying a small tiger. This turns out to be another member of the Sohma family, Kisa, also a member of the Chinese zodiac. When Kisa's mother comes to retrieve her it is obvious that she needs a much needed reprieve from her daughter's curse, so Shigure allows Kisa to stay with them for a few days. Kisa soon bonds with Tohru. Kisa's mute behaviour causes some concern for the Sohma family, and for Tohru as well. Momitchi Sohma reveals the root of Kisa's silence and a letter from Kisa's instructor proves to be too much for Yuki. Then Hanajima suddenly invites the Prince Yuki fan club to her home after they ask to write a newspaper column about Denpa waves. President of the fan club, Motoko Minagawa has ulterior motives, and Hanajima doubts it not. Hanajima's little brother and his ability to curse people is awaiting for them at the house. Much to Tohru's shame and dismay she fails one of her mid term exams and has to attend a make up test day. Under this stress her body becomes susceptible to a cold and the Sohma family becomes concerned that she is pushing herself too hard and force her to spend her illness in bed convalescing. Kyo proves to be an apt nurse when he makes her a cure all he loathes, and listens to Tohru reveal her anxieties about graduating high school and why it is so important to her. Again...I am hopelessly addicted. I'm going to stop telling people to read this anymore. If you have read all of my other reviews of the manga so far, you already know how much I love it. Go read it for yourself. It's wonderful.

I love this volume!

Published by Thriftbooks.com User , 16 years ago
I don't know why, but I love this volume! I think because it has so much of Hatori in it- actually so much of all the Mabudachi trio! They're most definitely my favorite characters- especially Shigure and Hatori (Ayame's growing on me...) Anyway, the Sohma's lakehouse is beautiful! (I always wonder what they did to get so fantastically wealthy...) There are some very adorable Tohru Yuki Kyo moments. We meet Kisa, the tiger. (Who's about as un-tiger-like as it is possible to be...) Kisa's adorable, and Hatsuharu makes a wonderful big brother to her. (Proving that you don't have to be Tohru to be nurturing and loving...)

One of the best mangas out!

Published by Thriftbooks.com User , 16 years ago
This is the 5th volume of the Fruits Basket series. Orphened Tohru Honda once homeless, is now living with her two classmates Yuki ,cousion Kyo Sohma, and cousion, Shigure Sohma, who is a novelist....I guess. Each of them and nine others (Sohmas) are cursed by spirits of the Chinese zodiac and like the legend, the cat, Kyo is left out. Oh! Shigure's the dog, and Yuki's the rat. In volume 5 it's golden week! So Shigure takes them and Hatori Sohma to a vacation home! Kyo and Yuki, who hate each other, are on speaking terms but when they do speak, they fight with each other! Tohru's kinda worried and thinks that she's the reason for them not talking. So she confronts them and they turn back to normal. Then they get home, Hastuharu Sohma, the ox, is there, with something being coved up by a coat... it's a cute kitty.. well, really,it's Kisa Sohma, the tiger. She's lost being able to speak because of teasing and is fearing that if she speaks, what she says well be laughed at. Kisa and Tohru become friends and... I don't want to give away the ending... But.. they Prince Yuki Sohma Fan Club tries to get rid of Tohru and ends up becoming cursed by Hana- chan's brother, Megumi... HA HAHA.....But this book is really good and is well worth the money!
Copyright © 2020 Thriftbooks.com Terms of Use | Privacy Policy | Do Not Sell My Personal Information | Accessibility Statement
ThriftBooks® and the ThriftBooks® logo are registered trademarks of Thrift Books Global, LLC