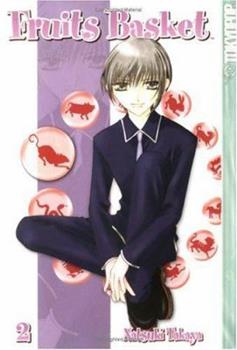 (Book #2 in the Fruits Basket Series)

We receive 71 copies every 6 months.

This description may be from another edition of this product. Tohru Honda, an orphaned high school freshman, is invited to stay with the mysterious Sohma family in exchange for cooking and cleaning. She soon discovers the family's great secret. . .its members...

Published by maya , 5 months ago
I purchased this book in 'good' quality in early June, it arrived yesterday and it should have been categorised as 'acceptable' at best. The spine is peeling off at the base, deeply scratched cover and a sizeable rip on the front cover which some bright spark (most likely previous owner) had taped on both sides of the cover. I certainly wasn't expecting it to be close to dazzlingly new condition but it's still disheartening that I paid $24AUD for a good quality book, waited weeks for it to arrive to Australia and ended up having to repair it with glue so it doesn't fall apart further. I have purchased another good condition book before and was extremely satisfied, but after this experience I advise purchasing above 'very good' to avoid disappointment.

I Can't Complain Too Much

Published by Aine , 1 year ago
I do like the story and the art style. For a $6 book, this is pretty good. I'm not annoyed about the animal scratches on the cover because, again, I got a used book for half the price of a newer one. But what I can't sit with is the residue on the cover. It's dark and crusty and I don't want to think about what it could be. I have not yet tried to clean the cover of the...substance.

Published by Amy , 1 year ago
If you've never read or watched Fruits Basket; I HIGHLY recommend it. It is defiantly one of the best shojo manga's out there!!! It is so beautiful and bittersweet. (I just bought this manga to complete my collection as I have already read it)

Published by KelseyRain , 2 years ago
This manga series. The book came in in great shape and so glad to re-own the series

My daughter loves this book

Published by Thriftbooks.com User , 15 years ago
I purchased this book and two others in the series for my 12 year-old daughter after she received the first volume as a Christmas present. She absolutely loves them all.

The Best Manga Ever!

Published by Thriftbooks.com User , 16 years ago
I don't read manga. I don't buy manga. I have always thought that those who get interested in manga are over the top otaku's who love their anime way too much. However, I watched the show and ABSOLUTELY LOVED every minute of it and I could not get enough of it! I decided to pick up the manga after I read some online forums that talked about how much the show left out. After reading it, some things in the show just make more sense. I feel like I understand the whole story a little bit better, and understand the characters better. I really enjoyed everything about this manga and I plan to buy the rest of them! So, if you're wondering about whether you'd enjoy it, whether you should buy it... I would say that you should just do it! If you loved the show, you'll love these (especially because it helps to fill in a lot of the blanks!) If you haven't seen the show and are interested in reading this anyway, I say go for it, it can't hurt ^_^ Even if you haven't seen the show, I think you'll still love it.

A 5 second guide to Japanese honorifics

Published by Thriftbooks.com User , 16 years ago
Quick review of the manga: Sweet, beautiful, slow-paced. Now, a quick guide to Japanese Honorifics (titles) used in Fruits Basket -san is the most common honorific. Comparable to Mr. or Ms. -kun is an informal and intimate honorific used by superiors addressing inferiors, or by males of roughly the same age and status. Also used among male friends. -chan is the imformal diminutive of -san, used by children to refer to friends and family members, or by family members, close friends, lovers, pets, etc. -sama is the most formal honorific used in everyday conversation. Used in addressing one of much higher rank.

Published by Thriftbooks.com User , 17 years ago
Fruits Basket happens to be one of my FAVORITE animes, and ironically, it's completely insane. It will DEFINITELY remind you of Ranma 1/2. Tohru Honda is a very pleasant and independent High-school girl. When her mom dies, and her grandfather cannot give her a home, she decides that everyone would be happy is she lived by herself...in a tent. On her way to school, she meets Shigure, who just happens to be "Prince" Yuki's cousin, the school heart-throb. She also meets another relative of Yuki's; Kyo, a foul tempered red-head. But what is *really* strange about the three? They have a curse, that when hugged by the opposite sex, they turn into their animal of the zodiac. Tohru is given the chance to live their if she keeps their weird secret. So...everything will be alright? Maybe if this weren't an anime.

A great edition to a great story!

Published by Thriftbooks.com User , 17 years ago
Fruits Basket is one of the best manga I've read in years, hands down, and volume two is just as good as the first one. It is a little darker (perfectly balanced, though) and you get to dig deeper into some of the characters. You learn more about the Sohma family and about the curse, too. You won't regret adding this to your bookshelf!
Copyright © 2020 Thriftbooks.com Terms of Use | Privacy Policy | Do Not Sell My Personal Information | Accessibility Statement
ThriftBooks® and the ThriftBooks® logo are registered trademarks of Thrift Books Global, LLC