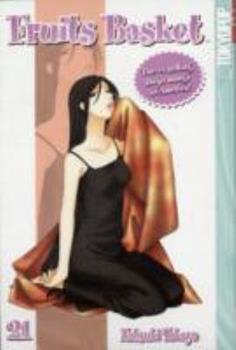 (Book #21 in the Fruits Basket Series)

Kyo finishes telling Tohru about his role in her mother's death and how the reason he disappeared for so long was that he felt so guilty about it. How will he react when Tohru says that she loves him anyway?

We receive 19 copies every 6 months.

Published by Thriftbooks.com User , 12 years ago
Basically, in a word, fantastic! I've been waiting for this one for a long time and it was totally worth it.

Published by Thriftbooks.com User , 13 years ago
the only thing that disappointed me is that I have to wait 4 months for th next one

Published by Thriftbooks.com User , 13 years ago
Poor Kyo Sohma. Not only is he an outcast, doomed to life in a prison, and pitied by his family... but he's also got a tragic secret connecting him to the girl he loves. And he and Tohru have even rougher problems in the twenty-first volume of "Fruits Basket," where Natsuki Takaya starts wrapping up some of the more personal storylines all at once. There's a little romance, a little comedy, and lots of sorrow and self-discovery in this manga, especially for the much-abused Kyo and his half-suppressed feelings for Tohru. Kyo blurts out his tragic connection to Tohru's late mother, expecting Tohru to utterly reject him. Instead, Tohru reveals her own feelings for him. But after he leaves, she's confronted by an enraged Akito, who accuses her, "You've made ME the outsider, and everyone loves you." But as Tohru suddenly realizes what Akito's problem is, she makes the desperate Sohma an offer... ... just in time for the ground to literally crumble under her feet. Her accident throws the already-fragile Akito into a tailspin, and causes the entire Sohma zodiac to be thrown into turmoil. Already blaming himself, Kyo has a nasty confrontation with Yuki in which the two boys reveal what they really think about one another. Well, we knew from early in the series, but it's nice that they're telling each other. If the manga "Fruits Basket" can be said to have a climax, then the twenty-first volume might actually be it. A whole bunch of storylines -- Akito's nutty loneliness, Kyo's hidden guilt, Tohru and Kyo's love for each other, and Kyo and Yuki's mutual envy -- are all addressed in these chapters, although it's clear that some of these plots aren't yet over. And Takaya takes the chance to show how much Tohru has come to mean to all of the zodiac members, as well as how much stronger they have grown because of her. Even Akito begins to realize that she doesn't have to be alone even without the curse. But after a few volumes of angst and sorrow, Takaya also weaves in some lighter stuff, including some truly exquisite romantic moments (including a cute little kiss). And Yuki unexpectedly provides some comic relief ("Are you trying to lighten the mood, brag, or just start in on sexual harrassment?" "Can't it be all three?"), particularly with Kakeru ("You wanna cry in my manly bosom?" "I'm going to punch you into the sun"). Tohru is the center of this volume, although she spends little time actually onscreen -- her goodness and love are what the rest of the plot runs on. Kyo begins painfully creeping out of his shell as Tohru's feelings become clear, and Akito is shown as a desperate, lonely creature who desperately wants just one friend. Yes, even after she starts swinging that knife around, you feel sorry for her. The twenty-first volume of "Fruits Basket" has the bittersweet feeling of a story that is approaching its end, with plenty of tragedy, romance and comedy along the way.

The Cat, The Rat and The Girl

Published by Thriftbooks.com User , 13 years ago
The stories of the supporting cast are largely told. We've waved Haru into the proverbial sunset with his Rin with a smile, and cried one last time for Momiji as we faced the harsh reality that sometimes people aren't rewarded with more than the perhaps not inconsiderable peace of a clear conscience for consistently putting everyone else first and always doing the right thing. Now, although everyone else is still in the background, we're back where we first began - with a girl and the two boys who became her housemates. As tragic as Momiji's situation is, we have to admit that with no alternative it was better he take another fall than Kyo. Momiji will survive not being completely happy if he has to. Kyo, on the other hand, literally might not make it without Tohru. But as the volume begins, Kyo is about to squander Momiji's final sacrifice and runs out of the house, rejecting Tohru's response to the bombshell he's just dropped on her. When Yuki finds Tohru in tears, he storms after Kyo prepared to beat sense into him either verbally or physically if necessary - and the two go at it in a raw, cathartic fight in which they finally air all the real reasons why they've mixed like water and oil their whole lives. Tohru, meanwhile, is left to face Akito - who arrives at Shigure's place completely, utterly mad in the wake of the events surrounding Momiji and Kureno... The volume also includes the climax of the Yuki/Machi story, and ends with two troubled souls in the balance as the final volumes are poised to answer the two remaining big questions of Fruits Basket - Kyo's fate and Akito's salvageablity or lack therof. If the Sohma's are owed a miracle, now is the time for them to call it in.
Copyright © 2020 Thriftbooks.com Terms of Use | Privacy Policy | Do Not Sell My Personal Information | Accessibility Statement
ThriftBooks® and the ThriftBooks® logo are registered trademarks of Thrift Books Global, LLC