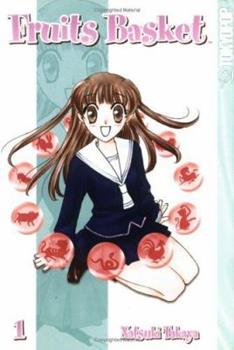 (Book #1 in the Fruits Basket Series)

We receive 62 copies every 6 months.

Tohru Honda, an orphaned high school freshman, is invited to stay with the mysterious Sohma family in exchange for cooking and cleaning. She soon discovers the family's great secret. . .its members... This description may be from another edition of this product.

Published by Leslie , 1 year ago
One of my favorite animes! I just had to read the manga.

Published by Thriftbooks.com User , 4 years ago
Fruits Basket will always be close to my heart. After years of loving the original anime (I’m so excited for the 2019 remake), I decided it was time that I read the complete story. Admittedly, the premise of the story wasn’t too interesting to me. I thought the whole “Sohma family curse” thing was kinda stupid when I first read the series description. Obviously, I now stand corrected. Despite its silly-sounding premise, Fruits Basket is a deep series that digs deep into the bigger questions of life. Fruits Basket is a must-read for everyone. It has taught me so much about life, acceptance, and true kindness. The series is filled with relatable characters that I have grown attached to over time. This series has helped me through the darkest of times. Tohru’s outlook on life is contagious, and I soon found myself wanting to be as kind and optimistic as her. Fruits Basket is a series that I will watch/read with my future family. It’s a series that I will always, always cherish and keep close to my heart. You will not regret reading Fruits Basket.

Published by Thriftbooks.com User , 17 years ago
I don't read manga. I don't buy manga. I have always thought that those who get interested in manga are over the top otaku's who love their anime way too much. However, I watched the show and ABSOLUTELY LOVED every minute of it and I could not get enough of it! I decided to pick up the manga after I read some online forums that talked about how much the show left out. After reading it, some things in the show just make more sense. I feel like I understand the whole story a little bit better, and understand the characters better. I really enjoyed everything about this manga and I plan to buy the rest of them! So, if you're wondering about whether you'd enjoy it, whether you should buy it... I would say that you should just do it! If you loved the show, you'll love these (especially because it helps to fill in a lot of the blanks!) If you haven't seen the show and are interested in reading this anyway, I say go for it, it can't hurt ^_^ Even if you haven't seen the show, I think you'll still love it.

I can't believe I almost passed this up...

Published by Thriftbooks.com User , 17 years ago
I am very picky about the manga I read, since it takes a bit of a financial investment to start and complete a series. So when I was looking to start a new manga series, I thought about Fruits Basket and how it was so popular. I figured 'why not give it a try', so I picked up the first 2 volumes. And now I am addicted. This is flat out one of the best series I've ever read. It has humor, action, romance, and quite a bit of drama. I'll admit, there where a few volumes (4 and 6, I beleive) that had me in tears. The basic premise of the story is of a young girl, Tohru, who just lost her mother, and to make a long story short, is living in a tent in the woods (don't worry, this is all explained). It turnes out that Tohru is actually living on the property of the Sohma's, and in a strange turn of events, Tohru finds out their secret; they turn into animals of the zodiac when hugged by a member of the opposite sex. Yuki and Shigure Sohma feel bad that Tohru is living in a tent, and in exchange for her housecleaning services, they let her live with them. And that's just in the first few chapters! I don't want to give away too much of the story, because half the fun is going through all the shocks and surprises that Tohru goes through. But it is all done at a pace that isn't too quick, yet it keeps the story moving. It's just one thing after another, and some of the discoveries are sad, and a little frightening (these happen in later volumes). Tohru and her eternal optimism and cheeriness can get a little grating; I'd like to see her get really mad at least once (and maybe that does happen later; only 7 volumes are out so far), but I don't think the story would be the same if she were any different. The same goes for all the other characters. This is a fantastic series for long-time manga fans, and beginners as well. You get a little bit of everything, the artwork is nice and cleans, if a little busy at times. I'm glad I didn't pass this up, and I hope you won't either!

Published by Thriftbooks.com User , 18 years ago
Fruits Basket (or Furuba as it's known to many fans) is a truly amazing manga. From the title of it, you would expect it to be very hentai-ish, but it's not. In my opinion it has to be the cleanest manga that one can possibly stand. (IE it's not so clean and happy go lucky as Hamtaro *shudders* Hamataro is evil, pure evil). Well I got off track. This review has spoilers abound so beware if you haven't read the manga (or seen the anime). Fruits Basket is about a girl name Tohru Honda a girl with a heart of gold and truly a wonderful person, whoes father died when she was very young. She is now 16, her mother had just died in a car wreck, and she went to live with her grandpa on her fathers side. (Because her mother and she were not exactly on speaking terms with her mothers side of the family). Her grandfather has to get his house remoldeld for some distant relatives on his side of the family so Tohru has to move out for a while. He told her to find some friends to stay with. Not wanting to be a burden to any of her friends Tohru decides to rough it, and she finds a tent and campsout for about a week, on the Sohma familys property (not knowing of course). One day while walking to school she comes across the Sohma family household. She looks around in it for a while and comes across some stones with the Chinese Zodiac on it. Than she run's into Shigura (who is the year of the dog) and Yuki (her high-schools "Prince" He is the year of the rat) Later on in the story we are introduced to Kyou (the year of the cat, who is not in the zodiac because he was betrayed by rat). And this is where the trouble starts.The Sohma family is cursed and therefore whenever they are touced or huged by a member of the opiset sex of someone NOT in there family, they turn into the animal that they are the year of. Tohru finds out this secret, and therefore she might have to have her memories erased from her. What will become of our poor Tohru? Find out when you read the manga! And belive me, you will. It is a must read.Now I odviously left out a lot of details from this manga, but I didn't want to give away the whole storyline, that would be quite dumb wouldn't it?Also this manga is printed in the original left to right reading format, therfore preserving the original artwork and sound-effects. It makes it even more enjoyable. All in all this manga is a must read. It's kinda of a comedy/romance, kind of. And it's shojo, so it's more or less going to be apealing to the femail gender a little bit more. That's not to say that a guy wouldn't like it. It has quite a bit of action in it (not like Trigun action) more martial arts action. But it is a must read. And I really hope my review helped. Do you believe it was written by a 16 year old? The reveiw I mean.

Love it, love it!

Published by Thriftbooks.com User , 18 years ago
Living in Montreal, I bought the first volume of this series in French, about a month ago. I was feeling very depressed, and thought I'd cheer myself up with a new manga. I came upon the Fruits Basket series, which was already up to volume 7 here. The cover looked cute and the summary was intriguing: a girl living with a family of boys who turn into animals of the Zodiac in "particular circumstances"... I'm normally not a big fan of shojo (girl manga/anime), but I figured I could use some fuzziness.After reading the first volume, I found myself completely infatuated with Fruits Basket. It's absolutely adorable, but not in an excessive way. The basic story has been summarized by other reviewers, but here it is again: Yuki Sohma lives with his elder cousin, Shigure, on the outskirts of town. Yuki is one of those people everyone is drawn to: he is intelligent and extremely good-looking, and even has his own fan-club at his highschool (although he doesn't exactly endorse it). Despite everything he's got going for himself, Yuki remains a distant, mysterious person, with apparently no true friends and he never dates anyone.On the other hand, you have Tohru Honda, a classmate of Yuki's, who recently lost her mother. To make a long story short, no one in her family could take her in, and she didn't want to impose on her friends, so she decided to live in a tent in the woods, until things got better. Tohru is so naieve a lot of readers consider her to be a bit of an idiot, but she's actually a very pure-hearted, caring person, with a lot of courage and an eternally positive attitude. The emplacement she chose to set up camp happens to be close to Shigure's home, so it's only a matter of time before she stumbles onto the house and meets its two inhabitants. The two boys eventually find out she lives in a tent (Shigure's initial reaction is to laugh hysterically). They decide to let her stay with them, in exchange for her doing their housework: indeed, despite how gifted the Sohma cousins are, they are useless when it comes to cleaning and cooking.Enter Kyo, another member of the very large Sohma family, who appears out of nowhere and whose goal in life is apparently to beat Yuki (whom he despises) in a martial arts' battle. During the battle, Tohru accidentally trips and falls against all three of the boys, and they all turn into animals. Thus Tohru discovers the Sohma family's secret: thirteen of its members are cursed and transform into an animal of the Zodiac (plus the cat - embodied by Kyo - who was, according to the legend, left out of the Zodiac because the mouse - embodied by Yuki - tricked him) when pressed against a member of theopposite sex.Despite finding out the secret, Tohru is allowed to remain with the Sohmas, although there is always an ominous chance that the head of the family, Akito (the mysterious, rarely-seen "bad guy" whose presence looms over all the characters) might change his mind and have her memory erased.The story develops from 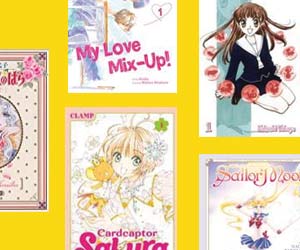 Find the best shojo manga available to English-language readers today that reflects part of the wide range of stories in this category.