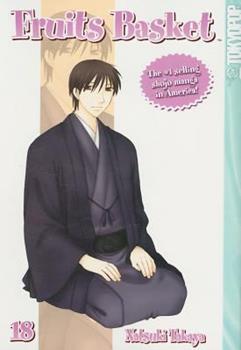 (Book #18 in the Fruits Basket Series)

Everyone knows Isuzu is in the hospital, or is she? While everyone is searching for Isuzu, Isuzu is on her way to take an item from Akito that will allow her to break the curse. But in the course of taking this item she is caught.

Published by Thriftbooks.com User , 14 years ago
My daughter started reading these books after her friend told her about them. She is collecting the series and has even begun drawing the different characters. Sometimes she spends hours drawing and coloring the images. She is reading and increasing her art talent a winning combination. Although the subject matter is comic romance, I love the fact that she is reading.

Published by Thriftbooks.com User , 14 years ago
Having revealed some shocking facts about the Sohma dictator, Akito, Natsumi Takaya turns her attention to the supporting players. And the eighteenth volume of "Fruits Basket" turns us back to several favorites -- Hiro, Kisa, Haru and Rin, with a little sprinkling of Yuki and his budding love life. What's more, Takaya throws a wild little twist in near the end, which hints at what will eventually happen to the zodiac. Rumors are flying that Machi tried to murder her baby brother, surprising Yuki. As he searches for clues to this quiet, strange girl's personality, he also has to deal with one of his fangirls, who is about to graduate and has a parting message for him. The truth of Maki's family life only draws Yuki closer to her. But things get nastier when Rin disappears, and Haru starts searching for her. Kureno finds a maid taking food into the cat's empty room, and learns that Rin is being imprisoned there, after Akito beat her savagely and chopped off her hair. For the first time, he defies the "god" of the zodiac. And when Haru learns what happens, he goes berserk at Akito, and is forced to finally confront the truths about what Rin has been secretly doing, and why. And as Rin is allowed to recover in peace, she has a visit from Shigure -- who tells her a shocking (to her, not us!) new fact about the zodiac. There's a clear light at the end of the tunnel in this volume -- some of the character arcs are more or less wrapped up, and Yuki is starting to develop romantic feelings for someone other than Tohru. And, of course, Takaya reveals new info on the curse and how to get rid of it -- a sure sign of end times. And the storylines here are a mingling of lightheartedness and dark tragedy. Takaya explores parental neglect, abuse and vicious rumours, but she also introduces us to Hiro's new baby sister. And for romantics, the tempestuous relationship between Haru and Rin finally hits a turning point, full of humor, tenderness and peace of mind. It's adorable. Takaya does let us know that the zodiac storyline hasn't been forgotten in the last chapter. The big revelation is not entirely unprecedented, since it's been hinted at in recent volumes, but Shigure finally gets it out in the open. Tohru, Kyo, Shigure and even Yuki don't get much focus in this volume -- they all appear, but mainly to reflect on the others. Some find peace of mind, some will no longer tolerate Akito's bratty behavior, and we get to see a new and nasty side to Akito's mother Ren. Maybe she's why Akito is such a violent basket case. The eighteenth "Fruits Basket" turns the spotlight on the supporting players, full of romance and darkness, and sometimes gentle humour. But it still manages to make you wonder, "What's next?"

Published by Thriftbooks.com User , 15 years ago
This volume of Fruits Basket starts off with a wrap-up of one of it's earliest subplots, as outgoing YFC president Minagawa parts on good terms with Yuki as she lets go of her obsession with him in preparation for graduation, at the same time that Yuki learns a key part of Machi's past. After that, as a sign of the beginning of the end, the series starts to wrap up the fates of the main cast as almost all the rest of the volume is dedicated to completing the long, strange journey we've walked with Hatsuharu Sohma, as the Haru/Rin and Haru/Black storylines end in one shot. The Sohmas finally get the best of happy news for a change with the arrival of Hiro's new baby sibling safe and sound - an event which affects Hiro deeply. His joy is muted, however, by his worry and fear over the disappearance of Rin. Finally unable to take the burden of his knowledge anymore and not knowing what else to do, he desperately spills everything he knows - including his eyewitness account of what Akito did to Rin - to Haru. After comforting the boy and leaving him with Kisa, Haru makes a beeline for Akito - with murder in his eyes... Will Haru's better nature win out, or will he finally do something he'll regret for the rest of his life under Black's influence? The answer is a very satisfying ending for Haru of which the majority of fans will approve. Also including some critical scenes with Kureno further confirming that he's a very good person who happens to be making one tremendous mistake, and ending with an aching reminder that time is running out for Kyo, this volume sets a high bar for the remaining five volumes which will follow.
Trustpilot
Copyright © 2022 Thriftbooks.com Terms of Use | Privacy Policy | Do Not Sell or Share My Personal Information | Accessibility Statement
ThriftBooks® and the ThriftBooks® logo are registered trademarks of Thrift Books Global, LLC